Muslims are boycotting the Shawcross review and resisting Prevent. We can't do it alone. - Canary 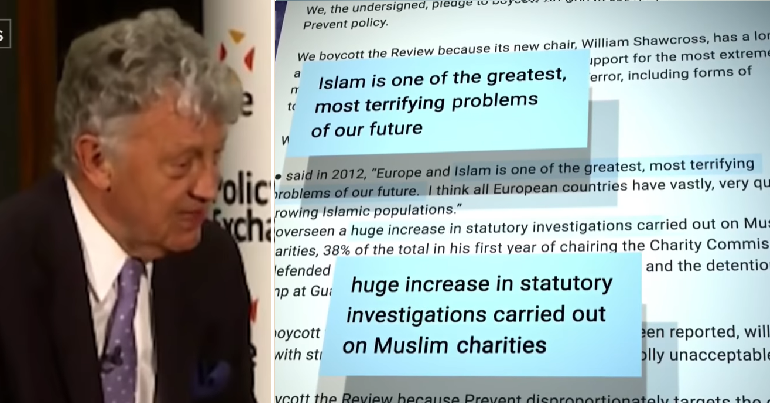 A coalition of over 550 Muslim organisations, mosque councils, Muslim academics, community organisers, individuals, and allies have signed a pledge to boycott the latest review into the Prevent programme. The coalition consists of individuals and bodies that already boycott Prevent and those who still engage with Prevent, united against the appointment of William Shawcross.

Shawcross, a neoconservative through and through, is well known for his support for the illegal war in Iraq and Rupert Murdoch, and even for praising the US army as the biggest defenders of human rights.

He aligns to a worldview in which the destructive nature of neoliberalism rules supreme. A world where people of colour, in the UK and globally, must bow to the world’s elite as much as workers must do so – if not more.

Shawcross’s past directorship at the Henry Jackson Society says it all. It’s a thinktank with extensive links to the US Islamophobia industry that have been constantly exposed.

It is this nefarious and Islamophobic world to which Shawcross belongs. He isn’t just right-wing. He’s far-right.

What’s most stark about Shawcross’s appointment is not the overt intention to whitewash the harms of Prevent, but the audacity of appointing a rancid Islamophobe to review a programme that’s constantly been described as Islamophobic.

The move is about sending a message, like so many others from this government, to say ‘we will do whatever we want’.

And in response to this insult, we have perhaps the biggest coalition of British Muslims united to boycott it. We know this review will not be balanced. Nor will it create any trust.

It’s for this reason that the coalition supports not only a boycott but steps towards a truly independent ‘Peoples’ Review’. This is the only way in which the overwhelmingly negative and corrosive nature of Prevent can be properly scrutinised. The nature for which the government has constantly provided political cover.

Regardless of our action, resistance against the harm that Prevent causes must continue.

The height of that resistance was in 2016, two years after Prevent was made a statute duty for public services and universities. The National Union of Teachers (NUT) passed a motion at its annual conference overwhelmingly calling for the rejection of Prevent, stating it has created “suspicion in the classroom and confusion in the staffroom”.

Voices have been raised in the NHS too. In one piece, Charlotte Heath-Kelly stated:

people go to their GP or their hospital when they are at their most vulnerable – so how can it be appropriate to assess them for signs of political ‘extremism’ when they are in pain?

Hundreds of academics called Prevent a “failed policy” and added its been:

roundly debunked by academics and experts across the board

They criticised it for being “not only ideologically-driven” but also failing to “engage alternative thinking”.

Moreover, they emphasised that it’s having a “chilling effect” on free speech and academic freedom in universities. This is something echoed more recently by the director. of human rights NGO Liberty.

However, that resistance has since dampened. This mistake has only led to the normalisation of Prevent and legitimised the idea of turning our public sector workers into informants for the state.

The damage it’s still doing to our society, especially to Muslims, is alarming. According to the Observer:

624 under-sixes [were] referred to Prevent between 2016 and 2019 . During the same period, 1,405 children between the ages of six and nine were also referred to the scheme.

So it’s enabling the state profiling of children – not ‘safeguarding’ them as the government claims.

A recent, major three-year study of Islam on campus revealed that Prevent reinforces negative stereotypes of Islam and Muslims. Despite this, Prevent training continues for university staff as it does for all public sector workers.

We’ve seen with the Police, Crime, Sentencing and Courts Bill just how authoritarian this government’s tendencies are. We understand innately the need to resist the clamping down of free assembly and protests. Even if it’s passed by Parliament as law, we understand the need to oppose that law through civil disobedience.

The same must happen with Prevent.

Mainstream campaign groups such as Campaign Against the Arms Trade (CAAT), Palestine Solidarity Campaign (PSC), Stand up to Racism, Extinction Rebellion, & Greenpeace have already been identified as ‘extremist’ in Prevent training material. This shows that not just Muslims but the broad Left, and anyone who wishes to protest against this government, could eventually be labelled and treated as ‘extremists’, with all the scorn, state-harassment and blacklisting that comes with it.