MIRI just dazzled with her latest EP - The Canary 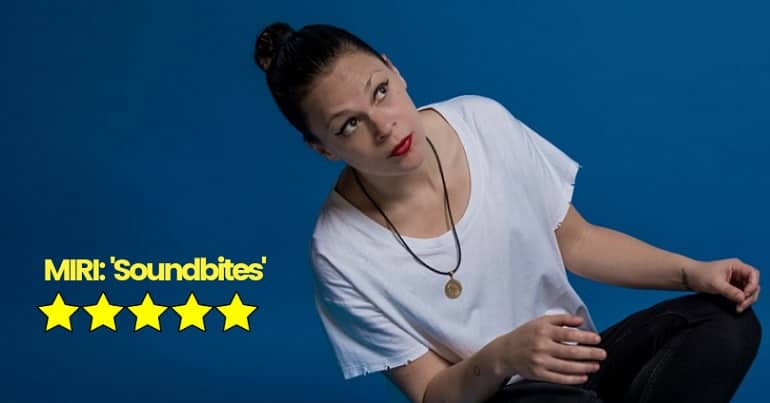 UK artist MIRI released her latest EP Soundbites on 19 July. To say it’s a dazzling project wouldn’t do it justice.

MIRI: her time to shine?

MIRI’s musical journey to this point has been diverse. Having released music for several years, she already has an illustrious live résumé, having performed at diverse events such as the Million Women Rise march in London and The 100 Club as part of the official Bob Marley birthday celebration. Now she’s dropped  Soundbites.

She told The Canary that:

‘Soundbites’ is my message to the world right now. It gives me a voice and new stories to share. I needed to strip everything back in order for my stories to be more clearly heard. The EP is a stepping stone and learning for my future recordings.

So, I caught up with her for the #ToppleUncaged podcast. We discussed the EP, her musical diversity, her work in mental health, LGBTQI+ rights, the prison system, the influence of reggae, and more.

Listen below, and continue reading for my take on MIRI’s Soundbites EP.

You can listen to the interview on iTunes here.

Musically, Soundbites treads an intriguing path between modern British indie and soul with elements of blues and reggae. The latter’s influence is subtle but there on the bluesy Good Ones and Somebody Save Me. The bubble pattern, where keys play on the offbeat, is present on and off throughout. Somebody Save Me leans more towards ska, with the interplay between the piano’s treble and bass clefs. It’s accompanied at times by calypso-like electric guitars, but these repeatedly morph into something much grittier, almost rock-like.

The title track Soundbites features doo-wop-like backing vocals, which encapsulate MIRI’s soul/indie hybrid approach. My Sweetheart takes this combination of styles one step further. The influence of the indie and post-Brit Pop genres is hinted at with the melody’s rhythmic repetition. But again, MIRI refuses to remain within musical boundaries. With the guitar playing a riff on the offbeat, a bass leading the chord changes, and the use of a tambourine, it harks back to a bygone era of gospel-influenced soul.

The whole project is raw and stripped back, allowing space for MIRI’s lyrics to take centre stage. They share this space with her vocal performance. It’s fitting that MIRI released Soundbites in the same week as the 60-year anniversary of jazz legend Billie Holiday’s death. Because MIRI’s voice and vocal performance in many ways echo that of Holiday, French icon Édith Piaf, and Amy Winehouse.

With each track, MIRI delivers a masterclass in grabbing an audience’s attention – and holding it. Much like Holiday, Piaf, and Winehouse, she uses her voice like an instrument. MIRI fluctuates her pitch, moving in the gaps between semitones. It’s almost like a cellist delicately sliding their finger down the instrument’s neck. This vocal phrasing has the effect of hammering home the lyrics to the listener, and also accentuating the storytelling.

But MIRI does much more than this. Her pointed syllable pronunciation, again like Holiday, ensures no word is dropped. She often melodically and rhythmically breaks each syllable up as well. She also tends to clip the final word in each line, punctuating her point and giving an almost dramatic pause before continuing. It feels like she’s gathering her thoughts before moving on, again adding to the emotive impact of her performance.

Yet above all else, what’s so exceptional about MIRI’s voice is its recording quality. Each track feels fresh, like it’s the first time she’s performed it. They all have an unabated rawness. It’s almost as if she’s saying the words for the first time. But it’s the expression, quality, and resonance in her vocal which really impress. The whole of Soundbites feels like you’re listening in an intimate, smoky bar – where MIRI is giving you and about 50 other people her undivided attention.

While MIRI’s voice grabs your attention, her socially charged lyrics are also a thing of real power.

Tackling society’s ills. One EP at a time.

Soundbites is littered with political and social commentary. For example, Good Ones is a haunting take on the societal structures we live under. MIRI muses how the “good ones stumble”, while “the ones that cause the suffering never learn”. It’s almost an ode to the common person; powerless, but who, as MIRI sings, ‘keep[s] on laughing, keep[s] on living….”. It also serves as a stark analysis of hierarchy, patriarchy, and privilege.

But again, what MIRI does so cleverly is ensure that her political and social musings are crafted in such a way as to drip delicately into your consciousness. There’s no brashness or unsettling anger with her delivery and lyrics. Both are almost introspective, reflecting a person trying to make sense of the world and their place in it. And her delivery means she could almost be talking about you and I, not just herself.

The title track Soundbites is a perfect example of this. MIRI ponders how, through her music, she has “got so much to say, but who will listen?… I’ve written so many words, in songs that go unheard…” It is again a theme of powerlessness in the face of a “world that keeps on going, without a conscience”.

Soundbites is a project that will surely prove to be timeless. MIRI has crafted something that cannot be boxed in, much like herself. Socially profound, lyrically resonant, and musically ingenious, the EP stands as a testament to the sum of this unapologetically heartfelt artist’s parts. But it’s MIRI’s vocals which truly shine, showing the glittering calibre of this unique performer. Soundbites stands as a glorious, emotive moment in her blossoming career.

Find out more about MIRI and follow her on Insta.

Soundbites and Good Ones by MIRI, supplied by Covered PR