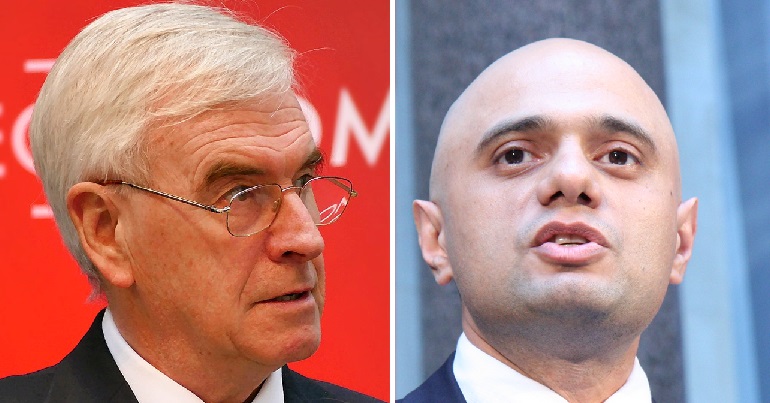 The shadow chancellor wrote to Johnson on 31 July calling for “two investigations into Mr Javid’s past conduct in matters of financial stewardship and decision-making”. McDonnell said that one should look into Javid’s involvement with “risky financial instruments that played a key role in contributing to the 2008 financial crash”. Javid, he stressed, had participated in “some of the worst excesses of the casino economy” while working at Deutsche Bank. US business magnate Warren Buffet, he said, had called the aforementioned ‘instruments’ “financial weapons of mass destruction”. And he continued by emphasising:

It will not be lost on those that have suffered the consequences of the last nine years of austerity following the 2008 financial crisis that the newly appointed Chancellor profited from the greed that contributed to it.

He also called for an investigation into Javid’s potential involvement with a tax avoidance strategy. As the Guardian wrote:

The Mail on Sunday reported in 2014 that Javid opted into a scheme known as “dark blue” that channelled bankers’ bonus payments through the Cayman Islands.

And calling for the release of Javid’s tax records, he claimed:

He has not denied his involvement in the scheme and has refused to disclose how much tax he paid.

I've written to Boris Johnson calling on him to reconsider the fitness of Sajid Javid to serve in the role of Chancellor pic.twitter.com/uEKqltCERQ

A “financial snake pit rife with greed, conflicts of interest and wrongdoing”

Deutsche Bank, which was among the biggest sellers of CDOs, was described by US senator Carl Levin as a “financial snake pit rife with greed, conflicts of interest and wrongdoing” ahead of the 2008 crash…

Deutsche Bank has spent more than $18bn (£15bn) on fines and to settle legal disputes in the past decade, according to Bloomberg.

Today I've announced the next Labour government will launch a public inquiry into Britain's financial industry.

We will root out immoral and unlawful practices and ensure finance serves the wider economy.

By seeking to hold both Britain’s new chancellor and the whole financial system to account, McDonnell is showing his clear determination to end the toxic gravy train between the financial sector and government. That is a necessary change that anyone who’s suffered from Tory-led austerity should support wholeheartedly.