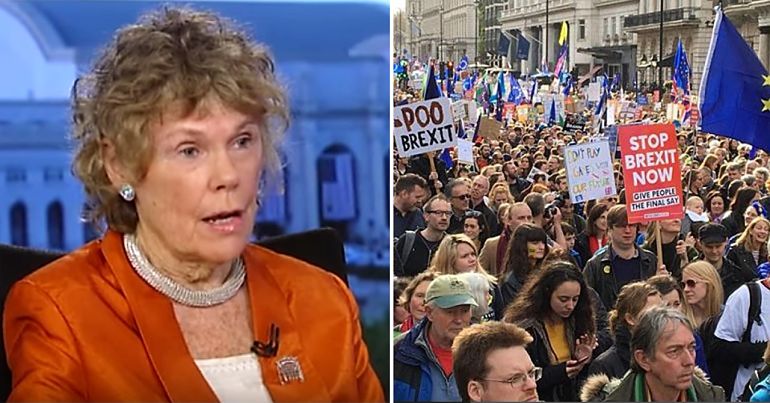 Pro-Brexit Labour MP Kate Hoey and DUP chief whip Jeffrey Donaldson have displayed breath-taking ignorance on avoiding a no-deal Brexit. They both think Ireland should sort it out.

Hoey and Donaldson suggested Ireland should act as a go-between to enable the UK and the EU to avoid no-deal. Such a scenario looks “increasingly likely” should the UK leave the EU as planned on 31 October.

What Hoey and Donaldson clearly forget is that Ireland is a member of the EU27 that negotiated the withdrawal agreement with the UK. And that agreement isn’t up for renegotiation.

An Open Letter on Irish Attitudes to Brexit https://t.co/AZH9PuABX0

act as a mediator between the EU and the UK and help London get the best deal possible with the EU, while recognising that the UK is leaving the customs union and single market.

Dublin can play a crucial role in helping broker an accommodation that both the UK & EU can accept.

Interesting suggestion by Eoghan Harris. If we are to avoid a ‘no deal’ outcome, then Dublin can play a crucial role in helping broker an accommodation that both the UK & EU can accept. There is still time to do this. pic.twitter.com/YNT6lnnza1

Donaldson’s tweet appeared to be inspired by an article in an Irish newspaper. People took to social media to set both him and Hoey straight.

It should frighten him

The first resistance to Donaldson came from within his own support base.

jeffrey they are not our friends,they have made a calculation destroy brexit thru the wa and humiliate it,or as they see it the hardship of no deal,theres no in between for them

But shock at Donaldson’s ignorance went much further. Donaldson showed he wasn’t just out of touch with his own supporters but also with the majority view in the north of Ireland. Because a greater number of people support joining a united Ireland in the event of a no-deal Brexit, compared to those who wish to remain in the UK.

Jeff, theres an opportunity here for some unionist vision for a change. If you oppose a NI only backstop & it results in no deal, just look at what happens (middle chart). Use your head for once. There are none so blind as those who will not see. Ignore at your peril. pic.twitter.com/LkCYZ9DFE2

This prospect should send a shiver down the spine of any DUP member given its main reason for existence is:

This person made it very clear that the British government is responsible for the mess.

How
Many
Times
Does
It
Need
Explaining??????

Are we physically incapable of sticking to our word?????? pic.twitter.com/ES25P0WCNi

Then one person reminded Hoey of majority Irish attitudes to the EU:

And, if you are interested @KateHoeyMP in public opinion in Ireland, the annual Red C opinion poll for @emireland in spring 2019 showed 93% of people in support of Irish membership of the EU.
*hint Anthony Coughlan is amongst the other 7%. pic.twitter.com/XhGCfJ0ZuN

Far from it Kate. This author holds an ultra viewpoint which is longstanding, and completely out of step with the country. His views do not not reflect the the majority of Irish citizens who are overwhelmingly pro EU by over 80%. You are spreading misinformation.

But the final word on Hoey goes to this poster who made it clear what he thought about the letter Hoey tweeted:

A better title would be "A Random Letter from Some Moron".

If Brexit is so fabulous and easy, how are the Irish stopping it from happening?
If no deal is so desirable why do you care about the Backstop and Ireland at all?
Why should Ireland seek to facilitate it?

Boris Johnson took on the baton of a botched Brexit from Theresa May. And when he returns to the House of Commons in September, a motion of no confidence could await him. So there’s possibly an election on the horizon.

Hoey has already said she won’t stand, and the election could return the DUP to Westminster irrelevance. So neither opinion will matter. What matters is the opinion of the British people. And they won’t forget or forgive the Tories for creating this mess. More importantly, they’ll make them pay as soon as that election is called.