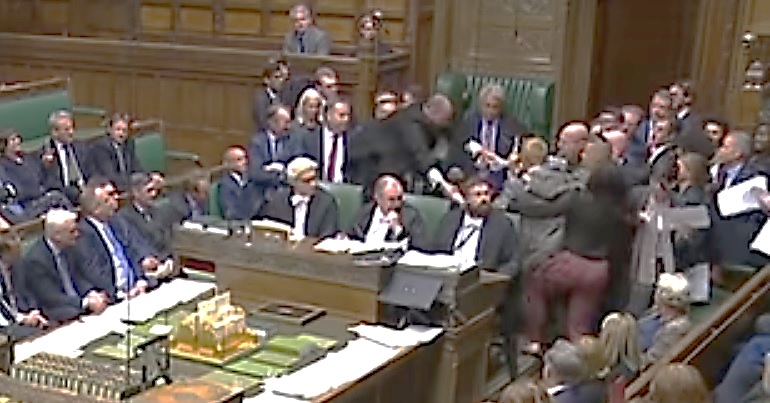 On 9 September, Boris Johnson succeeded in shutting parliament down for five weeks. But MPs didn’t take it lying down. And their passionate resistance shows the spirit we should all use to finally get the Tories out of power.

Several left-wing MPs tried to block speaker John Bercow into his seat in parliament in a symbolic protest against Johnson’s ‘prorogation’ process. They also held up signs saying ‘silenced’ to highlight the PM’s efforts to avoid scrutiny as the Brexit deadline approaches:

More photos of our protest, and the Speaker's speech, in the House of Commons at the #Prorogation enacted by the Tory government. pic.twitter.com/47nhdFN4n1

Tonight we made our point against the undemocratic shut down of Parliament. This is an attack on our democracy, and a demonstration of what Boris Johnson really represents.

Joining action with fellow opposition MPs to beseech Mr Speaker not to accede to Black Rod’s request to suspend parliament, echoing the action of members to try to prevent the Speaker proroguing at the request of Charles I. #Silenced https://t.co/AaWBDCbb3j

There was also a visible scuffle between MPs during the protest.

Before performing his role in the prorogation, meanwhile, Bercow insisted:

This is not, however, a normal prorogation. It is not typical, it is not standard. It’s one of the longest for decades. And it represents, not just in the minds of many colleagues but huge numbers of people outside, an act of executive fiat.

We couldn’t stop Johnson’s coup. But we can defeat the Tories and “deliver a radical government”.

With parliament now suspended, though, Labour leader Jeremy Corbyn is not remaining silent. He is continuing to stress an important message: that we don’t just need to stop Johnson – we also need to defeat the Tories and the powerful elitist interests they protect.

And it must be change that gives power to the true wealth creators – the workers.

So today we're announcing that the next Labour government will bring about the biggest extension of rights for workers that our country has ever seen. #TUC2019

We’re going after the tax avoiders.

We’re going after the bad bosses.

We’re going after the dodgy landlords.

We’re going after the big polluters destroying our climate.

Because we know whose side we’re on.

JUST ANNOUNCED: A Labour Government will bring about the biggest extension of rights for workers that our country has ever seen and introduce a new Ministry for Employment Rights. pic.twitter.com/xdLF234ev3

The next General Election will be a once in a generation opportunity to change the direction of our country and build a fairer society.

Earlier today from the #TUC2019 Conference in Brighton, I told @SkyNews about the lasting scars of Tory Austerity on communities across Britain. The next General Election will be a once in a generation opportunity to change the direction of our country and build a fairer society. pic.twitter.com/ZWaOKS4gqq

And in the battle to change the country’s direction for the better, Corbyn’s team knows full well that “the establishment will come after us with all they’ve got”:

In the next few weeks, the establishment will come after us with all they’ve got – because they know we're not afraid to take them on. #TUC2019 pic.twitter.com/CfR3sd9NfT

With the passionate spirit of people around the country (like the MPs who protested in parliament on 9 September), however, establishment forces will face their biggest challenge for decades. Because under a proudly left-wing leadership, Labour over the last three years has had its biggest membership since the 1970s. And as Corbyn said on 10 September:

We’re ready to unleash the biggest people-powered campaign we’ve ever seen in this country and in this movement.

In short, change is coming. And we all have a role to play in making that happen.