Keir Starmer just kicked Liverpool in the teeth - The Canary 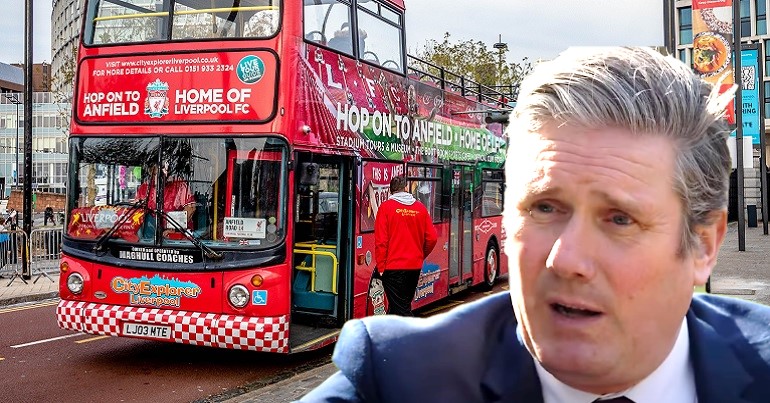 Keir Starmer is looking like he’s about to trash decades of proud history between the Labour Party and Liverpool. Not that his move should surprise anyone.

Liverpool: the eye of a storm

The Times has reported on Starmer. It says that he’s going to back the Tory government on their planned takeover of Liverpool. This comes amid an ongoing criminal investigation into members of the Labour-run council. As The Canary previously reported:

Liverpool mayor Joe Anderson has been released on bail after being arrested by detectives investigating allegations of bribery and witness intimidation. The allegations are linked to building deals in the city. Anderson was arrested with four other people.

Anderson has not been charged and has consistently denied wrongdoing – but resigned his post, with a successor to be elected in May.

Although Anderson is no longer on police bail, the case remains under investigation. But, as the Liverpool Echo reported, the Tories have done a report on the council, which:

has looked specifically at the council’s regeneration, property management, highways and planning departments.

Then, on Wednesday 24 March local government secretary Robert Jenrick revealed what the Tories were doing about Liverpool. As the Echo reported, he:

stopped short of ordering a full takeover of the council, with commissioners instead being sent to oversee specific functions within the planning, highways and regeneration directorate.

He said the report, by Max Caller, illustrated that there was a “pervasive and rotten culture” within the council and a “culture of intimidation” among some teams of staff there.

Commissioners will likely be sent to work at the council for a maximum of three years in an attempt to improve the governance of the city.

Starmer: clusterfucking to the max

So, apparently Starmer backs all this:

Merseyside once again assumes central stage in Labour's forever war: Keir Starmer will back a central government takeover of Liverpool, report @patrickkmaguire, @hzeffman @char_wace. This after a stitch up to select city's next mayor. Feels, erm, unlikely to soothe the left https://t.co/wlpwtgKJZm

Then, Jenrick’s shadow in Labour. Steve Reed, said in parliament the party would be investigating its Liverpool council.

Why the *@#$ would you support a Tory government planning to take over one of @UKLabour’s strongholds? @Keir_Starmer is an utter disgrace.

It would appear Keir Starmer is going to back the government’s takeover of Liverpool Council.

This is the beginning of the end.

Starmer has refused to oppose the Tory takeover of Liverpool.

Instead, it seems that both Westminster parties want to impose the rule of Tory minister Robert Jenrick, who has faced corruption allegations himself.

We believe the Labour Party is not fit to represent Liverpool

What a mess. And the situation is even more of one when viewed in a fuller context: from the ongoing ‘Labour purge’ to the party’s barring of left-wing candidates in the Liverpool Mayor election. If Starmer was hoping to annihilate the party at local level – then he’s going the right way about it. And he’s playing directly into the Tories’ hands, with one of the ‘reddest’ cities in the UK. Shambolic doesn’t cover it.