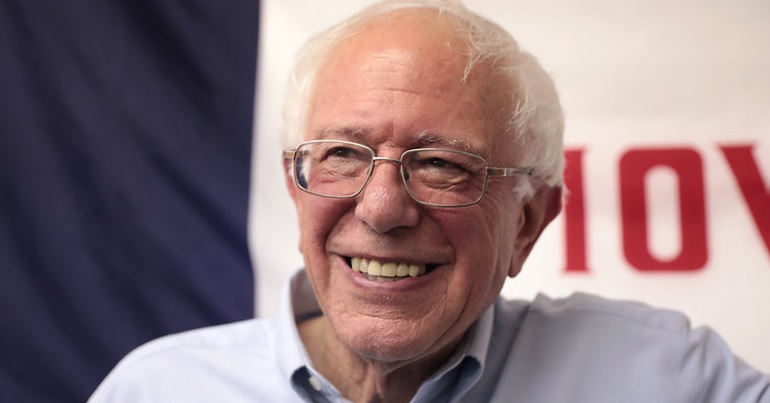 IfNotNow is “a movement of young Jews fighting for freedom and dignity for all”. This week, it became “the first Jewish organization to endorse Senator Bernie Sanders for President”, with 80% of its members backing the decision. The organisation described its endorsement as “a commitment to model what anti-occupation Jewish leadership looks like”:

We are proud to be the first Jewish organization to endorse @BernieSanders for President.

As a movement of young Jews fighting for freedom and dignity for all, we know that this fight is not over. #NotMeUs #JewsForBernie pic.twitter.com/x9xDza6lUx

The group explained that three questions from Rabbi Hillel – a religious leader quoted at length in Jewish literature – motivated its endorsement:

The fight of our lifetimes — against Trump and white nationalism, against oppression at home and abroad — is right now, and we know that @BernieSanders and the #NotMeUs movement is the best hope for a future with freedom and dignity for all people. pic.twitter.com/DOhzYALMWa

It also called for unity over division, saying:

While the right weaponizes antisemitism to keep us divided, we, like Bernie, know that never again means never again for anyone.

And it highlighted how Sanders:

has helped lift up a stubbornly idealistic strand of Jewish tradition that we never knew — and one that our communal institutions have worked hard to suppress. The attacks on his Jewishness from those in our community are painfully familiar — they are in line with the delegitimization and ostracisation that many Jews dedicated to justice have faced for decades because of our commitment to Palestinian human rights and a more equitable society.

IfNotNow placed particular emphasis on the Israeli state’s occupation of Palestine, stressing that:

As authoritarian leaders worldwide, including Israeli Prime Minister Netanyahu, stoke fear and incite violence to wage war on multiracial democracy, our own community is caught in the crosshairs. As Trump has given the Israeli government the green light to deepen its violent rule over the Palestinian people and formally annex the West Bank, he simultaneously incites antisemitic violence against our community, calls us disloyal for opposing him, and brandishes his support for Israel to attack progressive leaders of color. It has become more clear than ever that winning freedom and safety for Jews is inextricable from the fight for freedom and safety for Palestinians — at home and abroad.

With this in mind, it said:

We are proud to back a Jewish leader who vigorously opposes both the rise of violent white nationalism and the Israeli military’s violent occupation of the Palestinian people.

We have heard our entire lives that our safety as Jews is only possible through the dehumanization of the Palestinian people. This lie has been used to justify kicking Palestinians out of their homes and off their land, and it has contributed to our community’s alienation from other communities here at home. Bernie rejects the false choice between being a proud Jew and supporting Palestinian freedom.

And went on to add:

[Sanders] has called for an end to Israel’s military occupation, the common sense position that for too long has been maligned in our national politics and by the self-appointed leaders of our community. As the Israeli government accelerates its dispossession and oppression of Palestinians, the need to fight for a different vision — of human rights and democracy — becomes even more urgent.

IfNotNow called out the current US government for spreading “lies and incitement against the most vulnerable in our society”, including vicious smears against Palestinian people. It also stressed that:

We know that the right weaponizes antisemitism to keep Americans divided, keep the rules rigged in their favor, and keep power in the hands of the few. They hide behind their alleged support for Israel to distract us and to weaken our fight for a world where all people can have clean air, a living wage, and quality health care. They accuse anyone who disagrees of antisemitism, as vile antisemitism festers within their ranks. We are clear that the way to fight antisemitism is to join with others, because none of us are free until all of us are free.

Right now, as much of the American Jewish and political establishments are coming together to protect the status quo, we are joining with other visionary grassroots organizations in the fight for the soul of our democracy, so all people can live with dignity. We know that no matter who is president, we will need to continue to mobilize our community to win a just future for all Palestinians and Israelis.

This endorsement – as a model for “anti-occupation Jewish leadership” – is a bold statement in support of Sanders’ campaign to face Donald Trump in November’s presidential election. And it’s one that both Jewish and non-Jewish people desperately need to hear.