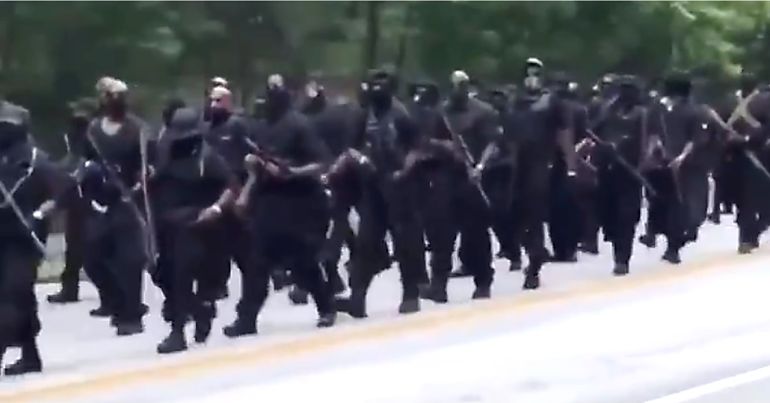 On 4 July, Independence Day, hundreds of armed Black citizens marched, military style, at a Ku Klux Klan (KKK) stronghold in Georgia, USA. There they issued a warning to “rednecks”.

According to Fox News, the “protesters”, which local police estimated as numbering “around 200”, gathered at Stone Mountain Park to demand that the massive stone carving there be removed. The carving is a memorial to general Robert E Lee, confederate president Jefferson Davis, and general Thomas J “Stonewall” Jackson. All three are confederate heroes and revered by white supremacists.

This follows Black Lives Matter (BLM) protests across the US and elsewhere that saw similar demands or direct action regarding statues of slave owners and their supporters.

One person tweeted that the number of those marching was more like 1,000:

YALL RETWEET THIS !!
About 1,000 Black soldiers called the (NFAC) showed up armed in Stoned Mountain Park the most popular KKK gathering spot 🤣🤣💪🏾💪🏾💪🏾💪🏾💪🏾 pic.twitter.com/ftGcml2wHZ

The NFAC march in Georiga that happened before the declaration.pic.twitter.com/CNNRy3Ecg8

NFAC stands for Not Fuckin Around Coalition and at the march a spokesperson taunted the far right:

BREAKING – An armed Not Fucking Around Coalition (NFAC) militia in Stone Mountain, Georgia has called out all rednecks to face them on the field of battle.pic.twitter.com/xUPkcT6uqL

NFAC came about in the wake of the killing of young Black man Ahmaud Arbery:

“Ex-military man” and NFAC founder Grand Master Jay spoke extensively about the killing and of racial killings and assaults generally.

Three white men, Gregory and Travis McMichael (father and son) and William Bryan, are facing charges for the murder of Arbery. The killing was filmed by Bryan.

As reported by CNN, a Georgia Bureau of Investigation agent has testified that Bryan told police that:

In the video about the Arbery killing it’s alleged that local media claims the armed individuals who gathered in the neighbourhood where the McMichaels lived were members of the Black Panther Party (BPP). The BPP was a US-wide mass organisation, prominent during the 1960s and 1970s.

One of its demands was:

We believe we can end police brutality in our Black community by organizing Black self-defense groups that are dedicated to defending our Black community from racist police oppression and brutality. The Second Amendment to the Constitution of the United States gives a right to bear arms. We therefore believe that all Black people should arm themselves for self-defense.

A video provides an overview of the BPP. It shows how the group was a prominent target of the FBI’s counter-intelligence programme (COINTELPRO), used to “track, harass, discredit, infiltrate, destroy, and destabilize dissident groups in the United States”. The BPP was also beset by internal struggles that contributed to its eventual demise.

As The Canary previously reported, it’s not just white civilians in the US who lynch Black people:

It’s the police too. Police kill around 1,000 people a year; and in 2019, the Mapping Police Violence website says “Black people were 24% of those killed despite being only 13% of the population”. It adds that “99% of killings by police from 2013-2019 have not resulted in officers being charged with a crime”. Studies, meanwhile, have consistently shown that police officers kill African Americans, Native Americans, and Hispanic Americans at much higher rates than they kill white people.

The Canary also reported how the BLM chair for Greater New York, Hawk Newsome, has called for the monitoring of police by armed “peace officers”. In an interview with DailyMailTV, Newsome explained that these peace officers would be armed, similar to the Black Panthers.

In the longer term, the wider BLM movement aims to eliminate all racist confrontations by the police, as well as racism generally. Whether initiatives like NFAC have a role to play in that struggle remains to be seen.