Trump becomes the first US president to be impeached twice 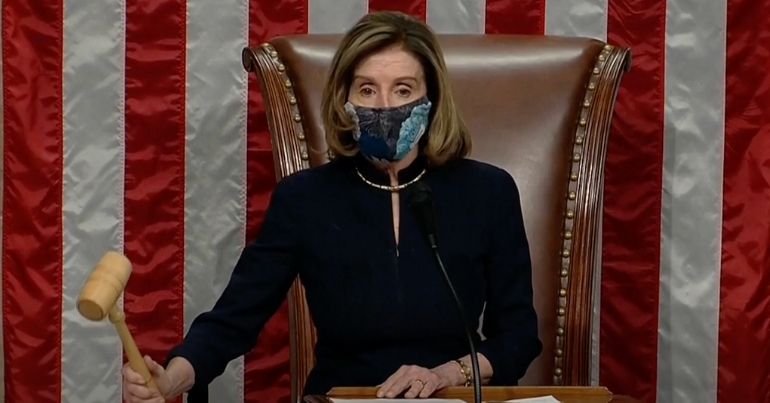 On 13 January, the US House of Representatives voted to impeach US president Donald Trump, charging him with inciting the 6 January attack on the US Capitol building through his words to supporters shortly before the insurrection. The vote makes Trump the first president in US history to be impeached twice. Trump released a statement following the historic vote, attempting to distance himself from the violence. He failed to mention his impeachment.

Highlights from the debate

In the debate preceding the vote to impeach the president, speaker Nancy Pelosi told the US House of Representatives:

The president must be impeached and… convicted by the Senate, a constitutional remedy that will ensure that the republic will be safe from this man who is so resolutely determined to tear down the things that we hold dear and that hold us together.

They may have been hunting for Pence and Pelosi to stage their coup, but every one of us in this room right now could have died.

Regarding the far-right plan to return to Washington D.C. ahead of president-elect Joe Biden’s inauguration, he added:

it’s a bit much to be hearing that these people would not be trying to destroy our government and kill us if we just weren’t so mean to them.

we have a mandate to legislate in defence of Black lives. The first step in that process is to root out white supremacy starting with impeaching the white supremacist in chief.

10 Republicans voted with Democrats to impeach the president – the most cross-party votes an impeachment charge has ever received. Dan Newhouse, one of the Republicans who voted in favour of impeaching Trump, said:

The president took an oath to defend the constitution against all enemies, foreign and domestic. Last week there was a domestic threat at the door of the Capitol, and he did nothing to stop it. That is why with a heavy heart and clear resolve I will vote yes on these articles of impeachment.

Trump’s impeachment does not necessarily mean he will be removed from office. In a statement, outgoing US Senate majority leader Mitch McConnell said that it would “best serve” the nation if the Senate’s impeachment trial begins after Joe Biden’s inauguration on 20 January.

My full statement on the next seven days and the Senate schedule: pic.twitter.com/Nh5z3f79yq

According to AP, “it’s unclear… how that trial will proceed and if any Senate Republicans will vote to convict Trump”. However, after four years in office, the disgraced president will definitely be leaving the White House next week.