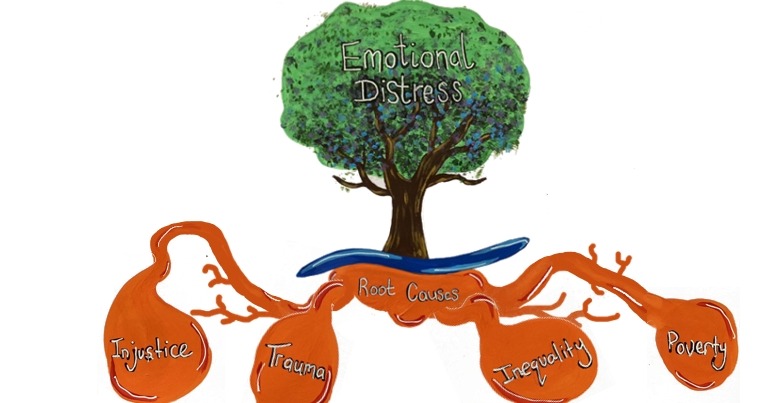 Mental health services in the UK are failing thousands of trauma survivors. Throughout this four-part series, I will be analysing some of the reasons behind this, and looking at some of the potential solutions. You can read part one here, where I looked at the current tendency to pathologise emotional distress. In this part, I will be considering how our current responses to trauma often retraumatise patients, rather than dealing with the root causes of distress. You can read part three here and four here.

Often, when people approach – or finally reach – mental health services in distress, they have already reached crisis point. Once they have been labelled and diagnosed, services may view psychiatric medication as the only solution to the crisis. This means unnecessarily medicating trauma survivors.

Psychiatric medication is often marketed as fixing a chemical imbalance. There is a growing consensus that this claim is insufficiently supported by evidence. This means the whole premise of prescribing antidepressants could be wrong. Services are misinforming people, thereby removing the possibility of fully informed consent.

Psychiatric medication numbs emotions, which could be helpful in crisis situations. However, services can’t expect people to deal with the root cause of overwhelming emotions if they’re shut off.

When something triggers my trauma, the feelings are overwhelming. However, if I completely numb those feelings, how would I know what I need to work on in therapy? Triggers point me towards the things that need my attention.

If we tell people they need medication to numb their emotions, we’re telling them that their responses and emotions are wrong, rather than them being an understandable response to suffering.

When I turned 16, a GP put me on antidepressants after one short appointment. I was having panic attacks which she said was down to a chemical imbalance in my brain, which the medication would fix. She didn’t ask what was triggering them. From that point on, I believed there was something wrong with me, which made the shame and self-blame for what I’d been through as a kid even worse. Obviously the medication didn’t fix anything. For a while it made me numb, until it stopped working. They kept increasing the dosage and eventually changed the medications. Each time it didn’t work, I felt more broken.

The psychiatric system is retraumatising women

I spoke with Sophie Olson, founder of the Flying Child – a non-profit aiming to bring lived experience into the heart of professional settings, such as education. She discussed her experiences of being admitted to an inpatient psychiatric hospital. In her opinion, this was due to the effects of trauma. She told me:

Mainly I felt misunderstood. The message is really loud and clear that you’re the problem – there’s something wrong with you. There’s an illness, that’s the problem.

As Dr Jessica Taylor discusses in her book Sexy but Psycho, professionals in positions of power forcibly medicate women to make them compliant – especially in inpatient settings. This can be retraumatising when you have experienced childhood sexual abuse and there are huge power imbalances at play. It also completely ignores the root cause of the distress. Olson continued:

I remember being injected with haloperidol [antipsychotic], my distress was just more than they could manage. It’s easier to restrain us in this way than to take the time and to ask, What can we do? What do you need? Tell me what’s going on for you. Can you express why you feel this way? I was extremely distressed.

The chemical restraint by antipsychotics is really terrifying. You feel it taking over your body as it knocks you out and there’s nothing you can do to stop it. It felt like being tortured. The amount of drugs they put us on was unbelievable.

In the end, I walked away. After 10 years, I could see that nothing made the slightest bit of difference to my state of mind. It was the result of CSA [child sexual abuse] and rape, abuse and emotional abuse, not the result of a chemical imbalance, being disordered or being ill.

Failing to deal with the root cause

Dialectical behavioural therapy (DBT) is the most common treatment for ‘personality disorders’, and therefore women who have experienced trauma. Dialectic philosophy features several core beliefs. The most important is that two seemingly opposite things can be true at the same time. For example, ‘it’s possible to be angry at someone but still care about them’.

The second part of DBT is borrowed from cognitive behavioural therapy (CBT). Both DBT and CBT aim to change thoughts or behaviours that are destructive, damaging or unhelpful. The premise is that because your thoughts cause your emotions, if you change your thoughts you can also change your emotions. This completely dismisses the fact that, subconsciously, triggers often power the emotions of trauma survivors.

Some people do benefit from DBT, but most of the current evidence base around its efficacy is flawed. This is because it does not separate out the specific needs of survivors. This means that it can be actively harmful for anyone with unaddressed trauma.

One of the skills in DBT is recognising and correcting ‘cognitive distortions’, which are:

unrealistic perceptions and interpretations of what is happening around or inside us.

For example, DBT would identify ‘they’ll be angry if I make a mistake’ as a thought that makes me panic. However, in my own experiences, these so-called ‘distortions’ are actually my brain’s way of protecting me from potential threats. When we put them in the context of the trauma I’ve experienced, they are understandable. The thoughts that are making me panic are based on previous experience and triggers, rather than ‘cognitive distortions’ and overthinking. When I did something wrong as a kid, people were angry at me. This is based on facts.

Radical acceptance, one of the key skills in DBT, is based on the idea that suffering doesn’t come from pain but from our attachment to that pain. It involves a conscious effort to acknowledge difficult situations and emotions – completely accepting things as they are, instead of ignoring them, avoiding them, or wishing the situation were different.

In theory, acceptance is an important concept. On the one hand, it’s important that we can accept our trauma, because we can’t change it. At the same time, forcing us to accept things the way they are, but making us respond differently, almost puts the blame on us for perfectly valid emotions.

Radical acceptance creates compliance. Teaching someone in distress that they must accept their current situation means they won’t question treatment plans, medication, or involuntary hospitalisations.

In other words, it creates women who will sit down, shut up and not speak unless spoken to. The ideal ‘mental health patient’ is a woman who will do what she’s told, when she’s told it, in order to be eligible for help. No one should be forced to comply to get their basic human needs met – this mirrors what happens in abusive situations. Just as with abusers, we are told to do what healthcare professionals say and not question, or there will be consequences.

For example, the withdrawal of warmth is one technique (read, consequence) used in DBT with the aim of making people compliant. Services will stop individuals from accessing their group or therapist if they don’t want to talk about certain things, or if they self harm. Or their therapist might sit back or shift to a more serious tone of voice. It says a lot when mental health services, which individuals are expected to put their trust in, mirror abusive situations. This simply reinforces trauma.

However, there are alternatives. In part three, I’ll focus both on alternative ways of viewing emotional distress and other approaches to therapy.