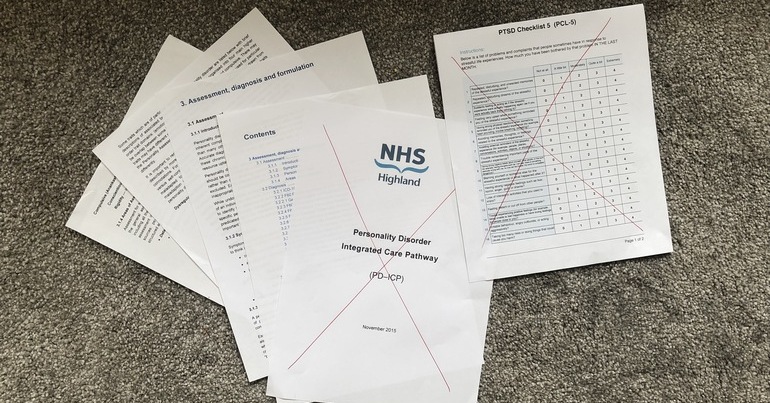 This article was updated on Tuesday 28 June at 4pm to give citation to Dr Jessica Taylor.

Mental health services in the UK are failing thousands of trauma survivors. Throughout this four-part series, I will be analysing some of the reasons behind this, and looking at some of the potential solutions. In this first part, I will be looking at the current tendency to pathologise emotional distress. You can read part two here, part three here and part four here.

The UK’s mental health system is retraumatising survivors by failing to respond to distress appropriately and humanely.

Trauma is an emotional response to an event or series of events. It is deeply distressing and overwhelms one’s ability to cope. Roughly one in three adults in England report having experienced at least one traumatic event.

Women who have experienced trauma are diagnosed with personality disorders at much higher rates than the general population. According to the Diagnostic and Statistical Manual of Mental Disorders 5 (DSM), 75% of people diagnosed with borderline personality disorders (BPD) are female. 71.1% of people diagnosed with it reported at least one traumatic incident during childhood. Why are services telling people who have experienced unimaginable pain that there is something wrong with them, while failing to address the root cause of their distress?

When you have experienced trauma, reactions such as flashbacks, nightmares, fear, self-harm and being hyper alert are natural; although often much stronger. These are how our brain and body keep us safe. Everyone reacts differently to trauma, meaning there’s not one response that wouldn’t be understandable in context.

Unfortunately, the NHS – and other services which people are usually directed to if they are in emotional distress – often misses this. This is because most people who have experienced trauma fit the diagnostic criteria for multiple mental health conditions. There is lots of overlap.

There is also a tendency within the mental health system to start with a diagnosis from the first signs of distress. Whilst this might provide some people with validation, it can be unhelpful for many trauma survivors. Complex trauma can lead to shame, guilt, and believing that you are at fault for what you’ve experienced. When services then diagnose you with mental health conditions, or tell you that you are disordered, you start to believe there is something fundamentally wrong with you.

From the age of 16, I have had several different psychiatric diagnoses – the mental health team settled on ‘post-traumatic stress disorder’ (PTSD) in 2018. Even the word ‘disorder’ meant that I started to believe that my trauma responses were the problem. This only made things worse for me. I now know that’s not the case, and that my body and brain have simply adapted to extreme circumstances and the ridiculous levels of stress over many years, in a perfectly normal way.

There have been many reports of a current mental health crisis among young people during the pandemic. However, the distress that young people are experiencing, and their emotional responses to isolation, loneliness, and fear are completely understandable in this context.

Living in poverty comes with constant stress. Whether it’s about paying bills you can’t afford, attending frustrating social security appointments or living in unsafe or insecure accommodation, poverty is a significant cause of emotional distress – you feel stuck. Not having the money to do things you enjoy, spend time in nature or connect with other people can also lead to an increase in fear or low mood. The type of society we live in is the biggest determinant of mental health: the more inequalities there are, the more people there will be who struggle with emotional distress as a result.

I spoke to Dr Lucy Johnstone, who is a clinical psychologist, trainer, speaker, writer, and long-standing critic of the biomedical model of psychiatry. She told me:

‘The trauma-informed literature is extremely valuable. However it does have some limitations. One is that it doesn’t always sufficiently make the links between traumatic events at a personal or family level and the wider conditions of society. The original trauma-informed literature comes from America. It doesn’t seem to me that sufficient connections are always made between personal experiences of trauma, racism and discrimination and so on, and the fact that America is probably the most economically unequal society in the entire world.’

Identifying trauma early could prevent re-traumatisation from the system

Child and Adolescent Mental Health Services (CAMHS) diagnosed me with ‘generalised anxiety disorder’ and ‘depression’ when I was 17, after one phone call. I only had a couple of appointments with them before I turned 18. They never asked me what was causing my panic attacks, or why I wanted to kill myself.

‘A defining moment is the one when you are turned from a person with problems to a patient with an illness.’

One conversation sticks in my mind. I was trying to explain why I kept walking out of lessons at college. I know now that one of my teachers was a huge trigger. But at the time, I didn’t understand what was happening. I told her it was because I was “remembering” and “I couldn’t stop it happening”.

She shut me down. She told me that I was walking out of lessons because I was panicking about remembering answers to questions. I didn’t have the words to tell her she was wrong. I knew then that I couldn’t try to tell anyone else what was going on.

According to Dr Jessica Taylor’s book Why Women are Blamed for Everything, in the UK, 20-36% of girls are sexually abused in childhood. And 20% of women have been sexually assaulted or raped after the age of 16. Most women have also experienced some form of sexual harassment, bullying or threats, witnessed something traumatic, or lost someone they cared about. On top of this, women also exist within the patriarchy – a system that has always positioned them as ‘less than’.

Dr Taylor suggests that by taking a trauma-informed perspective, and given what we know about society, we would understand that behaviours, thoughts, and feelings that women and girls develop, make sense in the context of what they are up against. However, the current system reframes these as mental illness, including personality disorders. By convincing women and girls that their responses are in fact ‘disorders’ and that there is something wrong with them, isn’t this just another form of victim blaming?

Until recently, I didn’t understand most of my trauma responses. Like 42% of women surveyed by VictimFocus, I didn’t have enough information about my own trauma responses or coping mechanisms. If women experience distress after trauma – but don’t have the knowledge or tools to understand it, the chances are that they won’t know to question a psychiatric diagnosis.

As Dr Taylor reported in her book Sexy but Psycho, once you have a diagnosis of a personality disorder, you are often known to health services as manipulative, deceitful and emotionally unstable. Many health and social services in the UK – including the emergency services – now ‘flag’ women who have a personality disorder diagnosis as high risk, without their knowledge. This often leads to services believing women are exaggerating or unreliable when they ask for help.

‘Too unstable for therapy’

My best friend Leah had been given a diagnosis of BPD because of her frequent self harm, alcohol use, ‘risk taking behaviour’ and ‘difficulty managing strong emotions’. These are all in the diagnostic criteria for BPD.

Because of her early experiences of complex trauma, she never gained the skills to manage her emotions. She learnt to hide them, keep secrets and self-destruct – which she carried into adulthood. The diagnosis (among all the others they gave) placed the blame on her for dealing with emotions inappropriately. This meant that professionals constantly put her in this box. They dismissed her trauma and told her she was ‘too complex’ for help.

Services told Leah she was too unstable for therapy. But how could they expect her to handle her trauma, when no one would help her? They judged her choices without knowing what options she had to begin with. She did the best she could, with what she had. Ultimately, the lack of support led to her death. My story is very similar to Leah’s, and I feel extremely lucky that I wasn’t given the same label.

For the second article in the series, I’ll be looking at why current approaches to therapy after trauma are often retraumatising, and fail to deal with the root cause of distress.