The overturning of Roe v. Wade is the fight for our lives - Canary 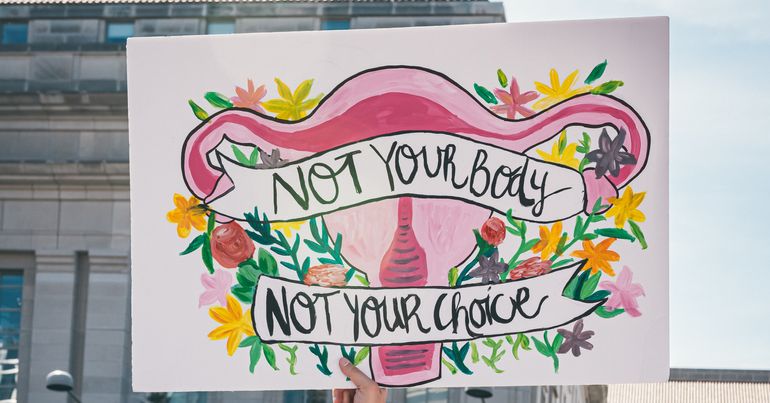 Following the Supreme Court’s decision to overturn Roe v. Wade, forced pregnancy is now the norm in some states in the US. Others are set to follow suit, and it is likely that 26 states will make abortion illegal. The Supreme Court’s decision means that there is no constitutional right to abortion. Some states have trigger laws which mean that the reversal can take immediate effect. As the Guardian reported:

Twenty-six states are expected to do so immediately, or as soon as practicable. This will make abortion illegal across most of the south and midwest.

This has happened in a country with a privatised healthcare system so bad that it’s only the rich who get the care they need – a nation where employers don’t even have to give mandatory paid maternity leave, where childcare costs are soaring, and where there are housing shortages.

Of course, it will be the most marginalised in society who are most affected by the ban: people on low incomes, young people, queer people, Black and brown people, those with disabilities, and people who have migrated to the US without papers.

The US is, of course, a capitalist nation founded on slavery, where patriarchy and racism thrives. In order for this system to survive, it needs to continue to crush people, to make them feel like they are lesser citizens. The overturning of Roe v. Wade clearly shows us that when the supremacy of cis white men is threatened, they will do everything in their power to subordinate us. Writer Hanna Phifer pointed out:

A country founded on the principle that people can be property will never be a country that will allow its citizens to have full autonomy or personhood. The beginning of freedom for all of us means an end to a country that has a vested interest in our subordination.

The legal and advocacy organisation ACLU said that Black women will disproportionately suffer in states where abortion has been banned:

This country already faces a severe maternal mortality crisis, one that falls hardest on Black women, who are three times more likely than white women to die during childbirth or shortly after.

Our access to abortion shouldn't depend on where we live or who we are. pic.twitter.com/VXLkp1vrKO

The war against LGBTQ people

The overturning of Roe v. Wade is also a continuation of the assault on the LGBTQ community – especially trans people – who have already been targeted by the state.

The organisation also pointed out that Roe v. Wade is just one – albeit significant – assault on LGBTQ people’s bodily autonomy:

we were in the midst of the most aggressive attack on LGBTQ people — and especially trans youth — that our country has ever seen. Over 300 anti-trans and anti-LGBTQ bills have been proposed in state legislatures just in 2022, and over 20 new anti-trans bills have become law over the past three years. Those new laws restrict access to health care, bar trans people from restrooms, prevent any discussion of the existence of LGB or trans people in schools, bar trans youth from participating in sports, or prevent updating government-issued ID documents to reflect our actual identities.

Others have voiced their rage about the war on the trans community on social media. Writer Zoé Samudzi tweeted:

Reproductive justice is about bodily autonomy, which is necessarily about one's ability to define and freely live/perform one's gendered and sexual life without state regulation. This includes terminating pregnancy, transitioning, and marriage.

And no, this isn’t about Islam

As people around the world share their disbelief about the overturning of Roe v. Wade, many are likening this new reality to living in Margaret Atwood’s The Handmaid’s Tale, as if this new reality is so unbelievable that we can only compare it to a novel about some imagined dystopia. However, it really isn’t necessary to point to a fictionalised book (or TV series) to make a comparison.

In fact, as one Twitter user pointed out, The Handmaid’s Tale isn’t even all that fictional:

On The Handmaid's Tale: Margaret Atwood basically took what happened to Indigenous, Black and Brown women in the US historically and applied it to white women in a work of fiction. Then and only then did a log of white folks realize how horrific that stuff is. It's infuriating

Others are even lashing out at Islam as they struggle to conceive that this could have happened in a country like the US. But as has been pointed out, this is a country that was formed through its own real dystopia, through enslaving people and stealing indigenous land. Jay The Nerd Kid pointed out:

this isn't sharia, by the way. islam doesn't forbid abortion. islam doesn't even forbid contraception. the west needs to reckon with its own demons. this isn't just like some bad thing from some imagined foreign place. this is your own bad thing you're dealing with, here.

As people in the US continue to lose their right to bodily autonomy, the fight is by no means over. The pro-life lobby and right-wing politicians won’t stop here, and could push for a nationwide ban on abortion in the US. And our own Tory politicians and their supporters here in the UK will, no doubt, be observing what’s going on over the Atlantic and taking note.

We need to stand together with everyone who is going to be affected. This isn’t justice, and there can be no peace.