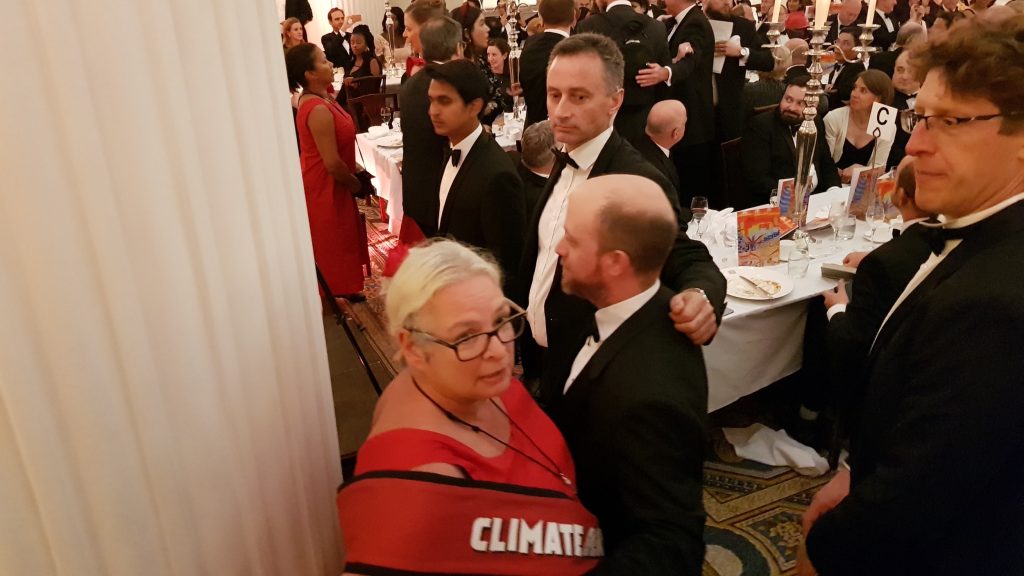 Hammond had barely started his address when the activists interrupted the black tie event in the City of London.

The disruption lasted several minutes. Hammond got back to his feet at 9.05pm.

Greenpeace later said 40 of its activists, some of whom wore red evening dresses with sashes that read “climate emergency”, had interrupted the event, which was being broadcast live on television.

In a statement, Greenpeace UK climate campaigner Areeba Hamid said: “This is a climate emergency. Business as usual is no longer an option.”

Climate protest at mansion house during Chancellors speech. Protestors Seem to have taken over PA with alarm being piped through Never seen this in nearly ten years coming here. pic.twitter.com/upYix7qI0p

The Treasury has tried to water down govt action on climate change & the people in the room for @PhilipHammondUK’s #MansionHouse speech have been funding it. But we are in a #ClimateEmergency – business as usual is no longer an option. That’s why we interrupted the speech tonight

Tory MP Mark Field grabs female climate change protesters who clearly was not posing any threat to him. pic.twitter.com/Q7M2mwgVYO