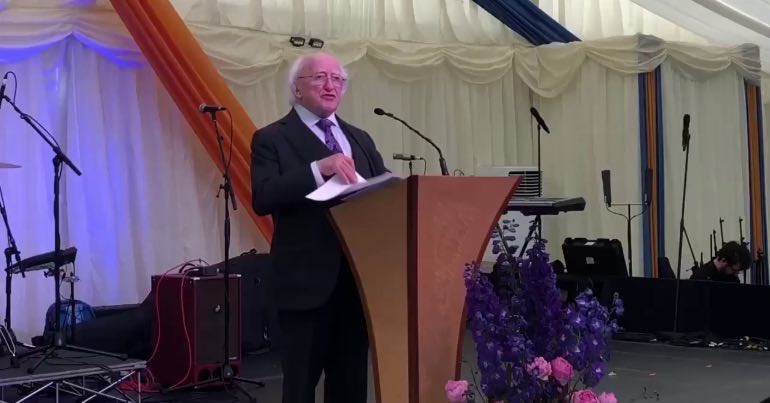 The Irish president has celebrated asylum seekers and refugees, and those who work to support them, by hosting a garden party at his official residence. Michael D. Higgins invited them to the Áras an Uachtaráin on 19 June, the day before World Refugee Day.

Higgins commended those present, saying they’ve made a “special contribution” to Irish society.

Celebrating those who help

The president and his wife Sabina invited the people there as part of their annual celebrations. They hold these events each year to “celebrate particular people and organisations who work on themes that the President wants to highlight”. And this year was a celebration of refugees and those who support them.

Today, President and Sabina Higgins will welcome people who are working to support refugees and asylum seekers to a Garden Party.

See the video below for an impression of the summer Garden Parties at Áras an Uachtaráin. https://t.co/0ewYswSEKC

The @PresidentIRL marks #WorldRefugeeDay by opening Áras an Uachtaráin to refugees.
"We must all learn not to do anything to increase or exploit the vulnerability of those who have come from war torn areas. We are better Irish people the more that we do." https://t.co/jh5ze740gr

Higgins made a speech during the event. He pointed out this was now the eighth year that he and his wife “welcomed our citizens in their diversity” to the Áras. He said he wanted “to acknowledge the special contribution” made by the attendees. And he argued that people new to Ireland are “a source of richness” for the country. As a result, he said, Ireland is:

a dynamic and cosmopolitan place, a country that embraces the innovation, opportunity, dynamism and creative energy that cultural diversity brings.

And he welcomed the contribution that people new to Ireland want to make. Their “distinct and unique cultural background”, he argued, will give us a chance “to widen our horizons”.

Higgins also reminded everyone of the history of the Irish people and their responsibilities:

We Irish are a migrant people and we always must recognise both the responsibility and blessing that it is to respond to the needs of migrants wherever they may be.

The reality of refugees

But Higgins also commented that the number of people around the world who’re refugees is “shocking”. He revealed that new statistics about refugees show that:

He also noted that some of the invitees came to Ireland fleeing war and persecution, and that they “may have experienced prejudice and stereotyping” since their arrival. For this, he declared:

Higgins’ comments and his event marks a welcome change. Ireland has recently seen attacks on centres for asylum seekers and an increasingly vocal far right. But his remarks remind us of the responsibilities Irish people have to people seeking asylum. And they remind us of our own history as refugees. For this reason and many more, they should be welcomed into Ireland with open arms.