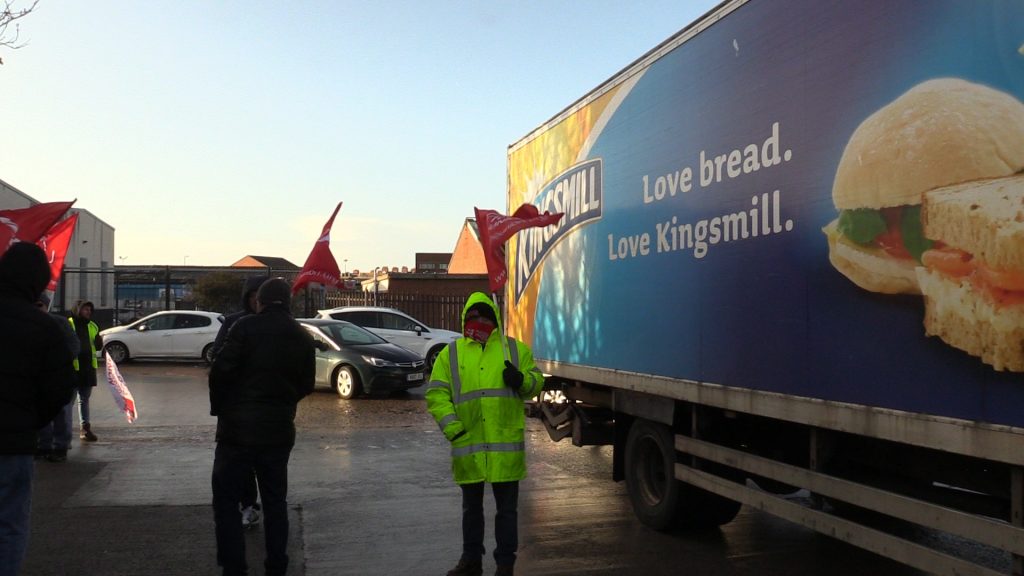 Workers have vowed to halt Pancake Tuesday in Northern Ireland during strike action at one of the UK’s largest bakeries.

Bakers at Allied Bakeries in east Belfast walked out early on Sunday morning for the first time in decades in a row over a 3% pay claim.

The factory makes products such as Kingsmill bread.

This is one of the busiest weeks of the year at the site, which is part of Associated British Foods.

The multinational company owns a series of brands, including clothes retailer Primark, and posted profits of around £1.4 billion last year.

A Kingsmill lorry stopped at the gates where dozens of workers carrying red Unite the Union flags demonstrated in the morning chill.

Unite regional co-ordinating officer Susan Fitzgerald said: “There will be no Pancake Tuesday celebrated in Northern Ireland and we hope to affect it elsewhere as well.

“During this picket, we will be sending people to stand outside supermarkets leafleting, saying that other working people, in solidarity with Allied Bakery workers, should boycott Sunblest, Kingsmill and the other products that come out of here.

“That includes a favourite unfortunately, pancakes, which are going to be in demand next week.”

She said the company’s turnover was worth £12 billion but workers were being denied a 3% pay increase.

This is the key week of production ahead of Pancake Tuesday, Ms Fitzgerald said.

She added: “We intend to disrupt that as much as we possibly can because we have no option.

“When working people are forced to go to this length for a fair pay increase, when this company pays out millions in bonuses to directors, we feel we are (getting) the support of ordinary people right across Northern Ireland and further afield.”

The PA news agency has attempted to reach Allied Bakeries for comment.

In an earlier statement, the firm told the BBC they were proud of their reputation “as a long-term and stable employer in the community” and that they were disappointed about the industrial action.

“All those involved within this ballot are paid at rates above the Living Wage Foundation’s recommended UK hourly rate and provided with a range of in-work benefits, including life insurance and pension provision.”

Ms Fitzgerald said Allied Bakeries was offering a 2.5% pay increase, which she added was significantly less than the Hovis bakery, which has a plant a short distance away in Belfast.

“There are workers here, women and men, who have put 30 years of their lives into this company and on a day like today when there has been hail, sleet and snow, these workers are forced to stand on a picket line and unfortunately a couple of drivers trying to unsuccessfully get a truck through.

“There is no work in there today, there is no-one going in and there certainly is no work coming out.”

She said demonstrators were resolved not to leave the picket line until their fair pay requests were met.

Ms Fitzgerald said: “These are workers who work around the clock, who work weekends for a consolidated shift rate.

“When you strip that bare, it is little more than the minimum wage.

“These are people who are feeding the country.

“No society can do without bread, these are key workers.”