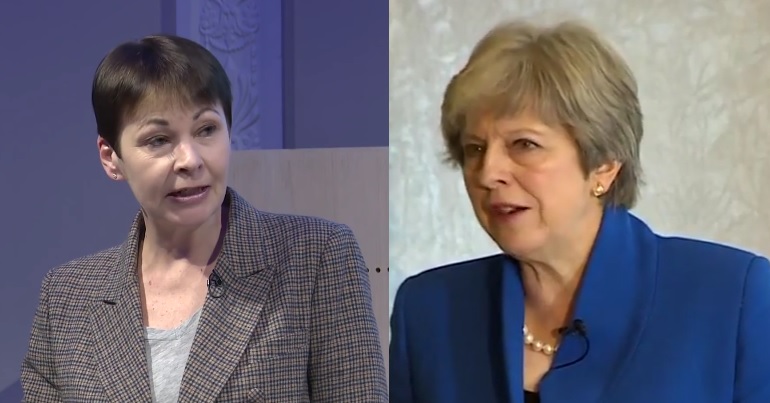 Caroline Lucas just threw her weight behind the mother of all court cases against the UK government.

11 British citizens, aged nine to 79, are taking legal action against the UK government over its climate change plans. The government’s own former chief scientist, David King, is supporting the action. And one of the lawyers representing the group is the attorney-general to Prince Charles.

The climate court case is unprecedented in the history of the UK.

The citizens are bringing the legal action against the government with a climate charity called Plan B. They will have the next case hearing at the Royal Courts of Justice on 4 July. Outgoing Green Party co-leader, Lucas, tweeted her support for the group on 8 June:

The Government isn’t remotely serious about tackling climate change so I am backing 11 citizens taking them to court on 4th July to demand a climate safe future. Please join me and back the court case too: https://t.co/hiE2eOsKAU

the UK’s domestic climate change targets are not even consistent with the minimum standard of the Paris Agreement it has signed and ratified.

The 2015 Paris Agreement committed signatories to keep the global average temperature to “well below 2°C above pre-industrial levels and to pursue efforts to limit the temperature increase to 1.5°C”. But former government lawyer Tim Crosland, who runs Plan B, says:

The science has clearly hardened since the Climate Change Act was agreed… The best available science tells us the risks of crossing tipping points rise very sharply between 1.5 and 2C. And that means the UK cutting emissions to zero.

Tipping points are irreversible shifts in the climate that would lead to environmental catastrophe. King agrees with this assessment. He told the BBC:

This is crazy… The government knows very well what needs to be done – but it isn’t doing it.

Meanwhile, the Committee on Climate Change’s most recent report found that the government’s progress on even reaching its 80% reduction goal by 2050 is “stalling”.

One fundamental part of global environmental stability lies in our oceans. Because, as photographer Justin Hofman says in this video about his iconic ‘seahorse and cotton bud’ image, they effectively function as “the lungs of our earth”. And Lucas appropriately pledged her support for the legal action on World Oceans Day.

Our oceans are currently under threat. Not only from climate change but also from the waste we dump into them on a daily basis:

PR Stunt of the Day:

Ocean wave billboard ad framed by a 1,580kg ‘wave of waste' to visualise the amount of plastic going into the ocean every hour.#WorldOceansDay pic.twitter.com/Ty7SD3AG2P

As David Attenborough explained in his message for World Oceans Day:

Our ocean defines our planet… the presence of the ocean touches every living thing no matter where it lives. The air we breathe and the water we consume are ultimately linked to the seas.

If our oceans are ruined, ultimately we are too. The same is true for most parts of our “endlessly fascinating” world.

That’s why this legal action is so important. Because by holding our government’s feet to the fire over climate change, we’re not only saving the planet. We’re saving ourselves as well.

– Attend the court hearing at the Royal Courts of Justice.