The most grotesque part of hunting season begins: fox cubs are torn apart for 'sport' - The Canary 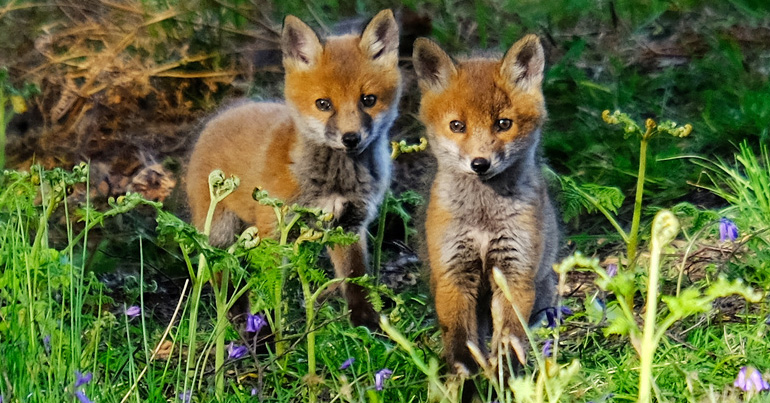 Fox cubs face two months of terror as the hunting season begins, according to anti-hunt groups. They say, between mid-August and mid-October, hunts across the country will train young foxhounds by making them ‘maul‘ cubs. And when it’s over, groups claim an estimated 10,000 fox cubs could be dead.

Hounds don’t naturally chase and kill foxes. They are taught the scent of a fox and how to work together in a process known as cub hunting or cubbing.

It explains that, during early morning or late evening, hunts will run young hounds through woodland where fox cubs are known to live. This encourages them to learn from a few experienced adults included in the pack. If cubs try to escape, hunt followers surround the wood and make noises to scare them back to the hounds. This happens multiple times a week.

Groups say that few fox cubs survive. Those that do face being hunted later in the year, or in following years. Many hounds also don’t survive. If one isn’t “savage” enough it could be killed, according to former huntsman Clifford Pellow.

By the time hunts have an ‘opening meet’ in late October or early November, a new generation of foxhounds have been trained to chase and kill. And surviving foxes are often driven apart from each other to disparate areas of the landscape. This provides ideal conditions for what hunters and their supporters call ‘sport’.

Hunting is illegal under the Hunting Act 2004 and this includes cubbing. But, 171 registered foxhound packs across England and Wales continue to operate using loopholes in the law. Trail hunting, which claims hounds follow an artificially laid scent, is the most popular.

But in 2012 two members of the Meynell and South Staffordshire Hunt were convicted of killing a fox cub. The judge said hunt master John Greenall gave an “innocent explanation” during a police interview for the incident. But during the trial the judge said:

He has chosen not to give evidence before me today. I draw the inference that his innocent explanation would not bear scrutiny.

Anti-hunt groups say this illegal activity is the norm. They also argue cubbing is what the hunting community doesn’t want you to know about because it reveals the truth behind the lies. Eduardo Gonçalves, then-CEO of the League, wrote for Huffington Post in 2016:

The cruelty of ripping a young fox cub from its family, and the savage deaths these cubs meet, must surely nail the lie that hunting is a legitimate ‘sport’, as its supporters claim.

The hunting community is vague about this practice when talking publicly. Pro-hunt lobby group Countryside Alliance simply says it “is to educate young hounds and indeed horses”. And Horse & Hound says it’s:

a gentle introduction for young hounds, new hunt staff, horses and followers to the forthcoming season.

Meanwhile, hunts themselves often talk about preparing horses for, or entering hounds into, the upcoming season. And the Quorn Hunt says on its website that:

Although we stick to the old terms, no hunting now takes place, but this time of the season we use for hound exercise – an ideal start time for newcomers since the pace is quite gentle.

The scale of it is stomach-churning. During the inquiry that led to the Hunting Act, it was estimated between 21,000 and 25,000 foxes were killed a year by foxhunts. And 40% of those were during cubbing. In the 2015 Trail of Lies report, 443 hunts were witnessed over 10 years since the hunting ban and 99% of those didn’t lay trails.

Published in 2000, the inquiry’s final report states [pdf, p33] England and Wales was home to 175 registered foxhunting packs. Today there 171. So, there’s a relatively stable number of packs sticking “to the old terms” of the ‘sport’. Groups argue that the results are not too different.

Meanwhile, five people were charged after video captured fox cubs being given to hounds at the South Herefordshire Hunt kennels in 2016. And hunt saboteurs have long suggested that hunts rear foxes in captivity.

Cubbing is “vital” for hunting, says anti-hunting campaign group Hounds Off. But even its name is terrible enough that the hunting community has tried PR management. The practice was first rebranded ‘autumn hunting’ and then ‘hound exercise‘.

A hot summer has meant an early harvest, so cubbing has already begun in 2018. Devon County Hunt Saboteurs and West Kent Hunt Sabs both published reports of hunts out on 11 August. And those extra few weeks could be absolutely devastating for thousands of fox cubs across the country. It’s essential for saboteurs to disrupt hunts during cubbing, says North West Hunt Saboteurs. Not only could it save young foxes now, but it will make hunting adult foxes more difficult in the future.

Cubbing is the dark heart of hunting. Its essential but kept hidden from public view. Thankfully, people are already taking action to help many fox cubs survive.

– Learn how to spot a cubbing meet from Hounds Off.

– If you have any suspicions or information about cubbing activity near you, then please contact your local hunt saboteurs or the Hunt Saboteurs Association. You can also join or donate to your local group.

– Read more at The Canary about hunting and wildlife crime.