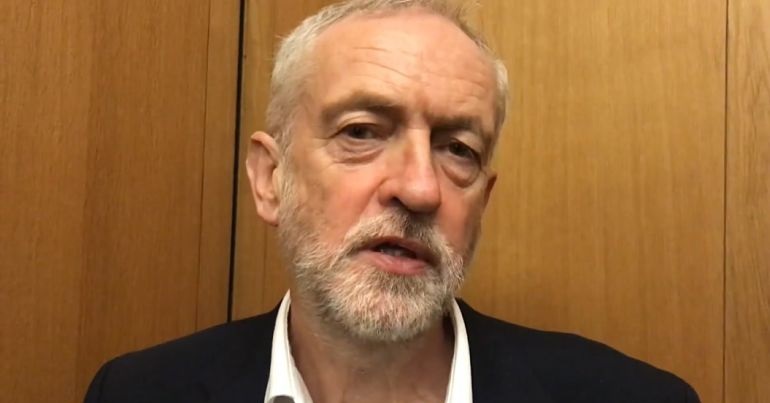 Jeremy Corbyn has thrown his weight behind a Tory MP’s proposed ban on “disgraceful” imports into the UK.

Zac Goldsmith introduced an early day motion to ban the import of hunting trophies on 13 November. The Labour leader has joined MPs from all parties in supporting the ban, including the SNP’s Tommy Sheppard – who called such hunting “disgraceful”. Meanwhile, figures from the Campaign to Ban Trophy Hunting (on the ‘spoils’ of UK hunters’ killing sprees entering the country) show why a ban is necessary.

Goldsmith’s motion has garnered support from 85 MPs so far. It notes that:

hundreds of hunting trophies have been imported into the UK in recent years, including from species threatened with extinction such as elephants, lions, hippopotamuses, leopards and rhinoceroses

Indeed, as the Canary previously reported, figures show 2,498 animal ‘trophies’ have made their way to the UK in the last decade. In 2017 alone, hunters returned from their cowardly slaughter jaunts with numerous body parts of elephants, lions, hippos, polar bears, wolves, brown bears and leopards.

But the motion demands an end to this. It:

The Campaign to Ban Trophy Hunting went to Westminster on 20 November to encourage support for a ban. While there, it spoke to Corbyn. He voiced his full backing for an end to imports in order to protect “our natural world” and “those very rare animals that are often facing extinction”:

As Corbyn notes, UK hunters often kill endangered species. For example, the trophy hunting campaign group says, in a press release seen by The Canary, that British hunters imported 922.1kg of elephant tusks between 2007 and 2016. So according to the group:

the approximate combined weight of all elephant tusks imported into the U.K. over the past decade is therefore conservatively estimated at 1950kg, or 1.95 tonnes

The World Wildlife Fund (WWF) lists all elephant species as either critically endangered, endangered or vulnerable. But the international body overseeing trade in endangered wildlife, CITES, allows hunters to butcher them. As Eduardo Gonçalves from the Campaign to Ban Trophy Hunting explained:

Many people think the hunting of endangered wildlife is banned. In fact trophy hunters are exempted from CITES. It’s an extraordinary loophole which poachers are taking advantage of. Around 300 rhino horns are known to have been exported by phoney trophy hunters between 2009-2014 alone.

As Gonçalves points out, hunting is providing cover for poachers. Nonetheless, advocates argue that hunting actually helps protect targeted species, by raising funds that can be used by local communities and in conservation efforts. But severely declining populations of elephants in the vast majority of countries that allow the practice suggest that, far from helping, this legal hunting is almost certainly contributing to their extinction. Conservationist and broadcaster Bill Oddie told the Campaign to Ban Trophy Hunting as much:

When you’ve got a scattered, dwindling population, the loss of a handful of animals doesn’t just cause a ripple effect – it can be like a tsunami wave.

Trophy hunting has always been senseless cruelty. Letting people kill them because they think it’s entertaining is just insane, especially when you’re talking about wildlife with such a vulnerable status.

Clearly, a number of MPs agree with Oddie’s assessment. But the UK has 650 MPs, and fewer than 100 of them have supported the motion so far. There appears to be inadequate political will to stop this “senseless cruelty”. Indeed, thanks to both central and decentralised governments, hunting takes place in the UK too.

This isn’t surprising. Britain’s ruling class, past and present, has shown that it’s up for such barbarity itself. It is out of step, though, with the vast majority of the British public. People want an end to this vile practice. It’s time for the public’s ‘representatives’ to put aside their own inhumanity and deliver it.

*Quotes, where not linked, are from a press release seen by The Canary.