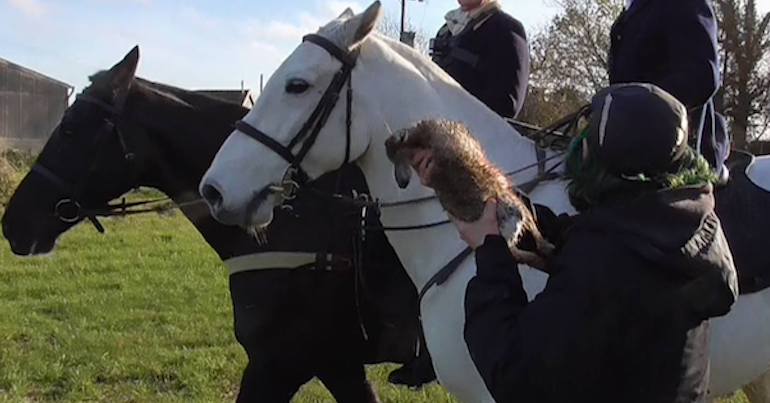 WARNING: THIS ARTICLE CONTAINS AN IMAGE SOME READERS MAY FIND DISTRESSING.

On 14 November, hunt saboteurs (sabs) witnessed the Easton Harriers’ dogs kill a young hare (leveret) in Suffolk. Harriers are a hound breed widely associated with hare hunting. Members of the Norfolk/Suffolk Hunt Saboteurs say they saw hounds kill the hare in Kersley Hall Lane, Stradbroke, Suffolk. Hare populations are in decline, yet as The Canary has previously reported, a legal loophole enables so-called trail hunting to continue across the UK.

Hunt saboteur members say they “believe the hunt had killed earlier in the day”. The group saw the hounds “were covered in blood” but could not see any “visible cuts”. A hunt saboteur spokesperson told The Canary that:

When the Easton Harriers returned to the meet after this possible kill, we told them they can’t continue hunting because the hounds were bloodied and therefore more likely to kill next time. However, we witnessed the joint master… tell [a] huntsman.. to continue hunting anyway. Within a few minutes of entering a field of beet [a commonly known habitat for hares], the pack of hounds split with half chasing and killing the leveret.

There are grave concerns about declining numbers of hares. A spokesperson from the Hare Preservation Trust (HPT) told The Canary:

The brown hare became subject to a Biodiversity Action Plan in 1995 following an 80% decline in numbers since the 19th century. This aimed to double its spring population numbers by 2010 and increase survival rate of leverets. However, in the absence of any action to achieve this, numbers have continued to decline. This is yet another example of the Government’s failure in its legislative responsibilities to British wildlife.

We are greatly concerned that hunting with hounds remains an ongoing wildlife crime issue in our countryside. The UK hare population (particularly East Anglia) is currently affected by a disease which has yet to be identified. It is possible that hounds will spread this to other local hare populations.

East Anglia is a stronghold of this fast disappearing animal. Yet this is not the first controversy surrounding the Easton Harriers. In 2016, the BBC reported:

The Norfolk/Suffolk Hunt Saboteurs claimed the Easton Harriers’ hounds killed one of the animals in Suffolk.

The master of the hunt said he was not aware of a hare being killed and said they were acting legally in exercising their dogs and hunting rabbits.

Now, a sab spokesperson alleges that “the Easton Harriers continue killing hares with impunity”. And HPT told The Canary:

They claim to be hunting rabbits and that hares are killed ‘by accident’. We view the ongoing ‘accidents’ as negligence.

Harriers and beagles are specifically bred for hunting hares. There are currently 55 beagle packs and 18 harrier packs registered with the Association of Masters of Harriers and Beagles (AMHB) in the UK.

The Canary has seen a statement from the hunt saboteur closest to the chase and kill, who also recovered the hare’s body. It alleges that a hunter “specifically” sent the hounds into beet fields and:

A chase ensued due to a hare bolting from the end of the field, with the full pack in pursuit. From this moment, chaos followed.

After the first chase, hounds reportedly scattered everywhere and it took 30 minutes for hunters to round them up, “though one never returned”. The statement says that, after this:

The hunt returned to the meet and, to our amazement, decided to continue hunting…

Easton Harriers returned to a beet field as one hunter led the hounds. A sab spokesperson said that at this point, the hare “bolted” and:

twisted, turned and zig-zagged in a desperate attempt to out-run the hounds as they gathered around.

Sabs tried to call off the hounds, but said this was impossible because the hounds are “poorly trained and have a history of rioting and killing wildlife”. Six hounds “pounced…pulling it in different directions”. Although one sab managed to rescue the hare, it died in their arms.

At this point the Easton Harriers left as one hunter reportedly said he “needed to get away” from the saboteurs. The sab spokesperson said:

nutes earlier this beautiful creature was living its life in peace. Its death was unnecessary and avoidable but was carried out at the will of the hunt. 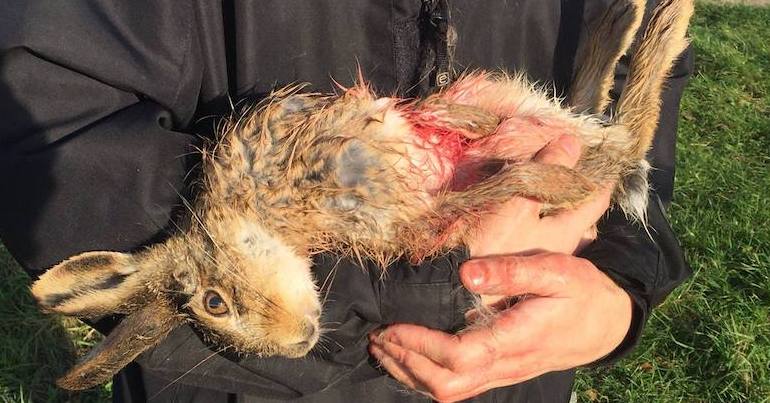 The Canary contacted two members of the Easton Harriers for comment. Joint master Jane Marson said she was not present when this hare was killed. She also said:

The Easton Harriers pack of hounds are trained to hunt to a trail of scent which is laid prior to each meet on land which we are allowed to go over. The trail layers have maps and record themselves laying the trail. The Easton Harriers Hunt are fully aware of the 2004 Hunting Act and work within the boundaries of the Act and legally Hunt to a pre-laid trail as described above.

Most debate about hunting in the UK focuses on fox hunting. Yet Harrier packs exist throughout the UK. A sab spokesperson alleges that they “continue to flaunt the law multiple times a week, every week, for the entirety of the hunting season”. In 2004, the Hunting Act banned hunting “wild mammals with dogs”. Yet, as the sab spokesperson said:

If you saw first hand what happened in the countryside, you wouldn’t think this legislation existed.

The sab spokesperson claims that “this kill does break the letter of the law regarding the Hunting Act”. But, because of “loopholes and technicalities in the law”, they say it’s highly unlikely that the kill could lead to a successful court case or prosecution. A spokesperson from HPT also said:

The Easton Harriers are witnessed pursuing and killing healthy hares on a regular basis; we believe this continued hunting activity is in contravention of the Hunting Act 2004.

Loopholes in this legislation allow ‘trail hunting’ to circumvent the law across the UK with animals such as hares, deer and foxes frequently killed by packs. In stark contrast, those participating in hare coursing feel the full weight of the law suggesting that there are broader social issues which need to be addressed.

We always perform within the law and that means meeting, exercising hounds, rabbit hunting.

As The Canary has previously reported, animals are frequently hunted to death across the UK through trail hunting. We must call an end to this barbaric act, and demand stronger legislation and ways to use existing legislation to end these mindless and cruel deaths immediately.