A new year and another fracking site gets underway - The Canary 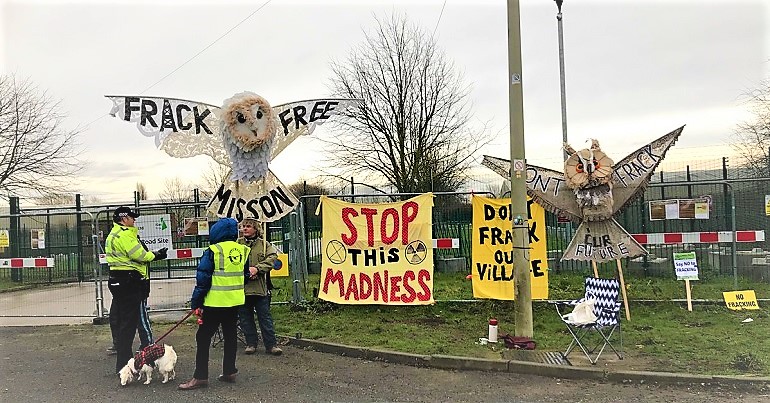 A matter of days into 2019, and already another fracking site is underway. And already it’s the subject of protests.

In November 2016 Nottinghamshire County Council gave IGas a licence to frack at a site on Springs Road in the village of Misson. The licence allows the fracking firm to drill two exploratory wells in its search for shale.

Springs Road is located in an area with a Petroleum Exploration and Development Licence (PEDL). The government has licensed the rights to explore the area for shale, under PEDL 140, to several companies. These include IGas and the major fracking firm INEOS.

As the independent news site DrillOrDrop has been documenting, the site became operational in November 2017. IGas began site preparations in December that year. But along with IGas came the protests.

In January 2018 local residents and campaigners set up what they call a “protection camp” near to Springs Road. There is also a campaign group, Frack Free Misson. During the year protests were held, along with awareness events. At one point police arrested five people. But by September, things appeared to have quietened down at Springs Road.

Then, on 5 January 2019, IGas suddenly began work again. DrillOrDrop noted the probable reason for this:

This is the first activity at Misson for several months after IGas switched attention to Tinker Lane, its other Nottinghamshire shale gas exploration site.

The company confirmed in December 2018 that the vertical exploration well at Tinker Lane had failed to find the target Bowland shale formation. It said it expected to spud (begin drilling) at Misson early in 2019

We have completed the logging of the [Tinker Lane] well and are now de-mobilising equipment off site.. T

here will be no additional use of the vibroseis equipment.

IGas’s return was marked by objections:

On 7 January, campaigners made their presence known:

And on 8 January IGas started moving more equipment in during the early hours of the morning:

But IGas has already put legal mechanisms in place to try and stop locals and campaigners from protesting. It got a court order in December 2018 stopping people:

Moreover, it has clearly been watching residents and campaigners at other fracking sites. Because the court order specifically bans people from:

A previous draft injunction caused anger among local people. This is because it specifically named not only a local councillor but also Misson Community Action Group (MCAG), which had been set up in part by IGas as part of its planning permission requirements. The injunction even named DrillOrDrop. But IGas later asked the judge to remove the names from the finalised injunction.

Local residents and campaigners have good reason to object to IGas’s operations.

Firstly, the Springs Road site is next to a site of special scientific interest (SSSI). The Misson Carr nature reserve (previously called Misson Training area) is known for its five species of owl. A condition set by the council as part of IGas’s planning permission was that it must:

ensure that breeding birds, particularly Long-Eared Owl, are not adversely affected by the development…

But Misson Parish Council and MCAG are concerned that this will not be the case. People also have concerns about the overall impact fracking will have on the SSSI.

Another objection of people is the fact that the Springs Road site is a former RAF bomb testing site.

As the Morning Star reported, campaign groups are concerned that the site, formerly a Cold War surface-to-air missile pad and a bombing range before that, contains unexploded weapons. As it noted:

The site is currently owned by a family business, L Jackson and Co Limited, which sells military vehicles and equipment. In 2009, a director of the company was jailed for selling military personnel carriers to Sudan’s dictatorship in breach of a UN embargo.

But as with all fracking sites, the major concerns are overarching. This is because the industry is very controversial. Along with its contribution to greenhouse gas emissions, it has been linked to polluted drinking water and also unsustainable water use. Studies have also shown links to low birth weights, premature births and a possible increased risk of breast cancer. Already in 2019, research has pointed to some risks specifically in the Bowland shale formation, where Springs Road and other sites like Preston New Road sit. It says that the formation could contain high concentrations of toxic metals such as selenium and arsenic.

But there is also the issue of earthquakes.

At one site in Lancashire there have now been over 50 seismic events since fracking company Cuadrilla started drilling in mid October. It claims the tremors are harmless. But some experts believe that they could lead to larger earthquakes.

IGas has planning permission and environmental permits to drill a vertical exploration well at the Springs Road site in north Nottinghamshire to take geological samples from the ground.

e take our environmental responsibility extremely seriously and as an experienced onshore operator are used to working alongside environmentally sensitive areas such as the Beckingham Marshes Nature Reserve and the South Downs National Park.

Eighty-four per cent of UK households rely on gas for heating and forecasts see the country set to import almost 75 per cent of its gas demand by 2035, costing us £7.5 billion per year. It is important therefore that we find out if the gas beneath our feet has the potential to make a major difference to future UK energy security of supply.

But locals are not impressed.

We are a small village in north Nottinghamshire under threat of Hydraulic Fracturing (or Fracking). Our concerns about this (as yet in the UK) untested technology include harm to wildlife both generally and in our SSSI, damage to farming, negative impact on human health, and general damage to the environment, both local and global.

The dash for gas: on the ropes?

The dash for gas has come out of the blocks quickly in 2019. But with an ongoing major court case against the government’s fracking policy, the industry could soon be on the ropes. And the situation in Misson is telling of the fragile state of the fracking business more broadly. IGas has barely started its operations, and yet has taken the pre-emptive strike of injunctions against locals and campaigners. Is it running scared? Possibly.

But the Springs Road site shows the nature of UK fracking companies as well. That is, when IGas found no shale at its Tinker Road site, it merely packed up and moved onto the next one (Springs Road). It is this ‘making a quick profit’, cavalier attitude which runs through the industry overall. And it shows why this dirty business should have no place in the UK.