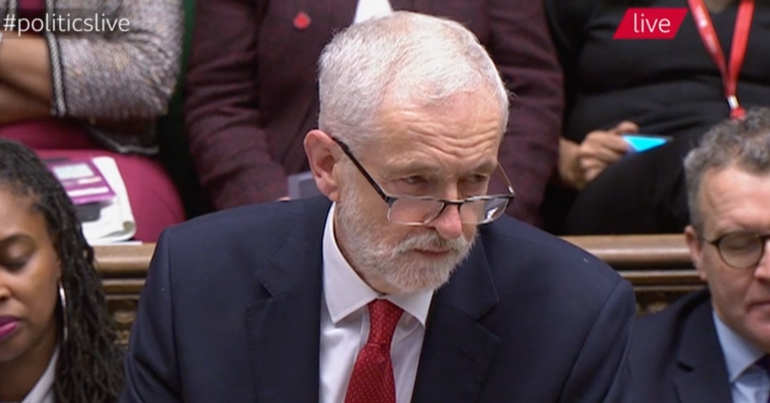 Prime Minister’s Questions (PMQs) returned on 9 January following the Christmas break. Theresa May started the session by talking about the behaviour of far-right protesters towards MP Anna Soubry and journalists outside parliament. May stated:

I know the whole house will join me in condemning those threats. Politicians and the media should be able to go about their work without harassment and intimidation.

But when Jeremy Corbyn stood up and agreed with the PM, he was met with jeers and abuse from Tory MPs.

“A safe space for political debate”

Corbyn agreed with May and sent his “support and sympathy” to Soubry and Owen Jones. He continued:

But we also have to be clear, Mr Speaker, that intimidation is wrong outside this building as it is wrong in any other aspect of life in this country. And we have to create a safe space… a safe space for political debate.

At this point, the jeers started. Corbyn continued:

See what I mean, Mr Speaker? I’m calling for a safe space for political debate.

But the abuse from MPs got louder and the speaker, John Bercow, was forced to intervene:

As @jeremycorbyn asks for safe space for people to have their views heard without intimidation or abuse right on cue up pops Tory MPs shouting, guffawing and booing, causing Mr Speaker to intervene, they are an embarrassment to the commons, awful behaviour from govt benches #PMQs

I said it at the end of last year they are hypocrites of the worst kind.The abuse @jeremycorbyn has had thrown at him day in day out has been disgusting and dangerous. #PMQS is a snapshot of everything that is wrong with politics and why so many are completely disillusioned https://t.co/quHYfbEDpD

Smith also says it’s a “snapshot of everything that is wrong with politics”. And she’s right. This was not a one-off occurrence, but a regular event every time Corbyn speaks at PMQs.

These MPs are setting the tone for political debate. And if this is the example they’re setting, it is sheer hypocrisy for them to condemn the behaviour of the protesters outside.