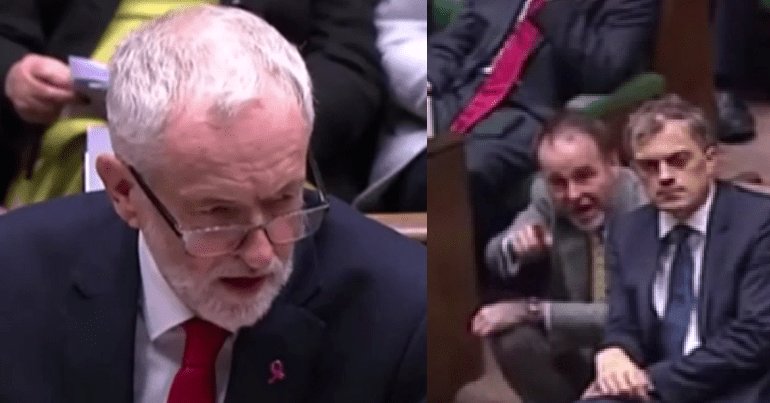 Mr Speaker, it’s very strange the way a member every week hides behind the gallery there in order to shout and hurl abuse.

Pincher appears to like sitting on the steps and heckling the Labour leader, away from the view of the Speaker:

As seen in the video above, Pincher seemed to be interrupting and heckling Corbyn from the same spot the week before. And other Conservative MPs jeered along with him, as though PMQs is some kind of pantomime.

On social media, people pointed out that Corbyn consistently faces a huge volume of shouting from Conservative MPs:

Boorish, aggressive and pathetic display from #Tory MPs as they try to shout @jeremycorbyn down at #PMQs. Hard to believe that @theresa_may lectured them about polite discourse in politics at their conference. How quickly they forget.

I agree so much with Jeremy Corbyn, but not kinder gentler politics. This rabble of Tory twats scream abuse like playground bullies trying to silence him every week. Forget taking the high ground @jeremycorbyn, tell Theresa May and her Tory shitehawks to go fuck themselves. #PMQs

#PMQs Who is the MP hiding from view of Speaker so he can hurl abuse? Looks like a character from #TheHobbit pic.twitter.com/Ms6a0f8OIG

#PMQs. This Gollum character, Chris Pitcher , is sent to this place every week to shout abuse at Corbyn. May pretends he is nothing to do with her. The Speaker pretends, after 3 years … that he can't see him. What a grim face , grim soul .. grim behaviour. pic.twitter.com/KBtW4i1Apc

Corbyn had been trying to hold the prime minister to account over Brexit. Over the shouting of Conservative MPs, he said:

Mr Speaker, the prime minister and her government are clearly too weak and too divided to protect people’s jobs or our economy or ensure there is no hard border in Northern Ireland. So the prime minister has a choice. She can continue to put the Tory party’s interests first. Or she could listen to unions and businesses and put the interest of Britain first. Which is it to be?

May responded by plugging unemployment figures rather than even mentioning Brexit. Every week at PMQs, May dodges pretty much every question while Conservative MPs shout down Corbyn.

So the Labour leader was quite right to call out Pincher for hiding from the speaker and hurling what Corbyn called “abuse”. What on earth is the man doing?