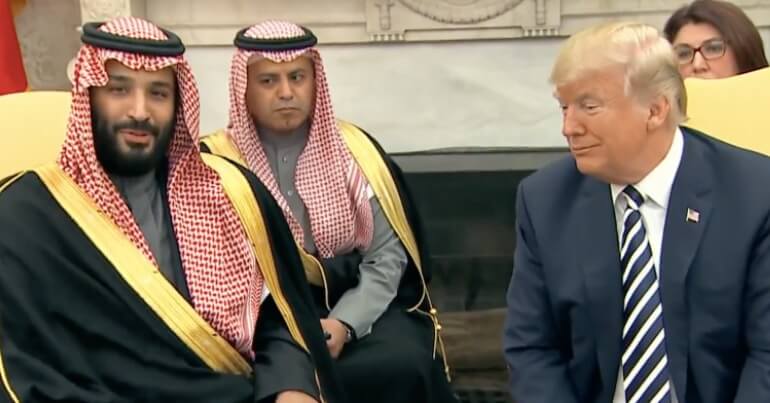 Donald Trump’s financial ties with Saudi Arabia have just been exposed… by himself. The US president recently claimed in a tweet that he had no financial interests in the country. But that doesn’t appear to be the whole truth. Because in a video from a few years back, Trump actually boasts about his financial ties with wealthy Saudi citizens.

In the tweet, Trump claimed he has “no financial interests in Saudi Arabia”, before saying that suggesting otherwise is “just more FAKE NEWS”.

For the record, I have no financial interests in Saudi Arabia (or Russia, for that matter). Any suggestion that I have is just more FAKE NEWS (of which there is plenty)!

But in stark contrast to what he tweeted, a video actually shows him boasting about selling multi-million-dollar apartments to Saudis, before concluding that he ‘likes them very much’:

Saudi Arabia, I get along with all of them. They buy apartments from me. They spend $40m, $50m. Am I supposed to dislike them? I like them very much.

Trump’s ties with Saudi Arabia are under scrutiny following the alleged killing of journalist Jamal Khashoggi inside a Saudi consulate in Turkey. The president’s initially tough stance on the issue has appeared to change following a conversation with King Salman. Trump is now speculating that “rogue killers” may be responsible, despite evidence apparently mounting against Saudi Arabia.

"I've asked and the king (of #SaudiArabia) firmly denies that."

Despite all the evidence, Trump says 'rogue killers' might be behind #Khashoggi disappearance. @realDonaldTrump pic.twitter.com/bSh0420mLK

In 1991, Trump sold a yacht to Saudi prince Alwaleed bin-Talal for $20m, saving him from bankruptcy. Alwaleed bin Talal, along with other investors, also secured a $325m investment deal in Trump’s failing Plaza Hotel in 1995. And Trump sold the whole 45th floor of Trump Tower to Saudi Arabia for $12m in 2001.

Saudi lobbyists and government officials are also frequent customers at Trump’s hotels. One PR firm spent nearly $270,000 at Trump’s Washington hotel between October 2016 and March 2017. The Saudi government has also been credited for increasing room rentals in Trump’s New York hotel by 13% after a two-year decline.

This isn’t the first time Trump has been caught lying, and won’t be the last. But the next time he wants to deceive us about his financial interests with Saudi Arabia, he might want to check there isn’t footage of him boasting about those same interests on camera.