As fracking protestors are freed, questions still remain over the judge who jailed them | The Canary ` 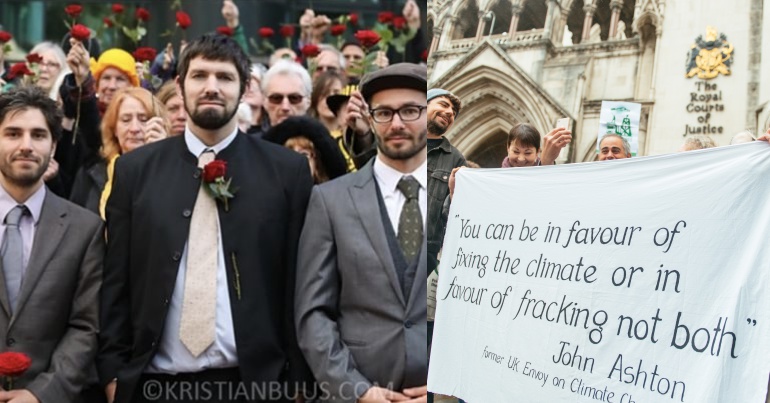 But evidence emerged which still raises questions about Altham’s compliance with the judicial code. Because his family owns a company that reportedly has financial links with the fracking industry.

A Labour MP submitted a parliamentary question calling for justice secretary David Gauke to investigate the judge who jailed the three anti-fracking protestors.

Altham’s sister Jane Watson and his parents are listed as the owners of J.C. Altham & Sons. A branch of the company is involved in the supply chain to Centrica. Centrica funds Cuadrilla which operates the Preston New Road fracking site where Blevins, Roberts, and Loizou were arrested. As the Times reported:

Centrica, the energy company, said that JC Altham & Sons, of Morecambe, was part of its supply chain as a sub-contractor to Aramark, which supplies catering and cleaning services to three gas rigs it majority owns. Centrica has invested tens of millions in fracking.

In 2015, Watson also signed an open letter to Lancashire County Council in support of Cuadrilla’s fracking proposals. The letter from the North West Energy Task Force (NWETF) claimed fracking would:

create thousands of jobs and improve local wages through access to a new £33 billion supply chain.

NWETF has since rebranded as ­Lancashire For Shale (LFS). In response to Altham’s sentencing, LFS stated, “justice prevails”.

The allegations over his family’s business connections have raised questions over Altham’s compliance with the Judicial Code of Conduct. It states:

Where a close member of a judge’s family is politically active, the judge needs to bear in mind the possibility that, in some proceedings, that political activity might raise concerns about the judge’s own impartiality and detachment from the political process.

Marsden asked a number of questions on the issue. He asked Gauke to “undertake an investigation into compliance with the Judicial Code of Conduct”. He also asked:

whether the Judge in the trial at Preston Crown Court… sought advice from (a) his Department and (b) the Ministry of Justice on the requirements of the Judicial Code of Conduct in relation to family connections.

In addition, the MP asked:

if he [Gauke] will publish the guidance issued by his Department on the duty of care required of justices under the judicial code of conduct when presiding over a case where the circumstances involve industries in which the judge’s family members have a financial interest.

On 16 October, Lucy Frazer answered all three of Marsden’s questions with one statement:

It would not be appropriate for me or any other government minister to comment on cases which are, or have been, before the courts. Anyone who wishes to make a complaint of judicial misconduct may do so to the independent Judicial Conduct Investigations Office. The Guide to Judicial Conduct, which sets out the standards of conduct expected of judges, is publicly available.

In a press release from FrackFree4Supporters, Blevins, Roberts and Loizou said from inside Preston prison:

Today’s decision affirms that when people peacefully break the law out of a moral obligation to prevent things such as the fossil fuel industry, they should not be sent to prison.

In response to Altham’s “manifestly excessive” sentences, Kevin Blowe, the coordinator of Netpol, said in a press release:

The original convictions were clearly intended to send a warning to others and are therefore a part of the continued efforts to close down space for campaigners to meaningfully resist fracking.

If senior officers thought they had discovered a strategy to use charges for this serious offence, backed up with the threat of potential imprisonment, to try to deter anti-fracking campaigners, it now seems that strategy is in tatters.