Centrism is not back - it’s on life support. Someone please tell Chuka Umunna. - The Canary 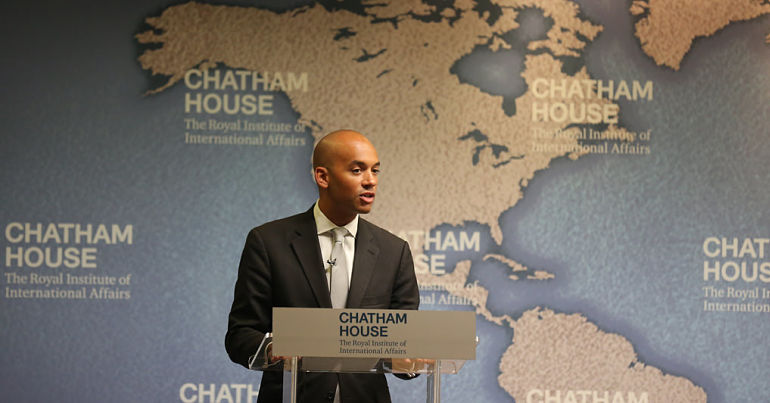 We knew ‘something’ claiming to be new, centrist, and progressive was coming. Many were convinced it would be in the shape of a new party to challenge Jeremy Corbyn’s Labour – the “vanity project of the super-rich with no policy or movement”. But it seems the “network of entrepreneurs” bankrolling this new party have bottled it and opted for plan B.

Plan B was revealed on 15 October, when Chuka Umunna announced he’d chair a “new think tank and network of progressives” named the Progressive Centre UK:

To promote his new thinktank, Umunna wrote a fact-light and ideology-heavy article for the Independent. It was entitled Whether you want to call it centrism or progressive politics, it’s back. But not for the first time, Umunna’s flogging a dead horse. Because centrism is not back – it’s on life support. And we need only use Umunna’s examples to prove it.

In his article, Umunna praised Canadian PM Justin Trudeau for “standing up [to] Donald Trump on a number of issues” and having “advanced reconciliation with Canada’s indigenous peoples”. Umunna’s featured image for the article, moreover, was of Trudeau.

But as Canadian author Naomi Klein pointed out at UK conference The World Transformed, Trudeau is a false progressive “who’s able to position himself as an anti-Trump by sending out a few memes”. While talking big in public, Trudeau consistently capitulates to Trump’s demands. In this sense, Trudeau is the neoliberal politician. Whether dancing in India, explaining quantum computing, or photobombing a beach wedding, he’s not focusing on policy. He’s creating a Trudeau brand which masks his administration’s more dangerous policies.

That brings us to climate change and Canada’s Indigenous populations. In November 2017, Trudeau became tearful while apologising for the treatment of Indigenous children in Canada’s residential schools. Trudeau’s tears soon dried, however, when the Canadian government purchased an oil pipeline and attempted to run it illegally through Indigenous territories.

Umunna similarly used Spain as evidence of centrism’s revival. He claimed that Spanish PM Pedro Sánchez “pledged to ‘transform and modernise’ his country”, without making any reference to the Spanish government’s reliance on the radical left Podemos party to remain in government.

This has been retweeted by Podemos leader @Pablo_Iglesias_ as a correction to @ChukaUmunna’a factually incorrect piece.

Spain’s government is implementing a left wing Budget with measures so-called “centrists” did not want. The left forced them to adopt them against their will. https://t.co/Y2Yfc8tp8S

French PM Emmanuel Macron also featured in Umunna’s article. Macron’s election, according to Umunna, is “further evidence of the progressive renaissance”. Some renaissance: Macron’s popularity is slipping uncontrollably, and it’s probably because he’s never been as ‘progressive’ as he claims.

The former investment banker has, unsurprisingly, initiated a wave of privatisations, hiked taxes on pensioners, and attacked workers’ rights.

On 16 October 2018, police raided the office of parliamentary opposition La France Insoumise (France Unbowed) to investigate funding abuses. According to Jean-Luc Mélenchon, the party’s leader, the raid was “a politically motivated act, an act of political aggression”. His party demanded to know why Macron, whose party spent significantly more in the recent election, hasn’t received equal treatment.

The latest chapter in Macron's crusade to save democracy in Europe: on the first day of France's new government police have raided the office of his most significant parliamentary opposition @FranceInsoumise.

Our campaign accounts have been validated. This is not the case for Macron, whose accounts had irregularities. When are we going to go to his family home at 7am to search the cupboards?

Centrism’s slow death across Europe is mirrored in Germany. On 16 October, elections in the state of Bavaria resulted in major gains for Germany’s Green Party. While the Greens more than doubled their share of the vote, the sister party of Angela Merkel’s Christian Democrats lost their overall majority. It was the worst election for the Christian Social Union in decades.

After Umunna’s confusion about whether he’s Labour or Tory, his endorsement of dying neoliberal parties across Europe and North America is not altogether surprising. His article, however, gives us a crucial insight into what kind of ‘centrism’ he imagines for Britain. And it’s certainly not pretty.

– Join Momentum, for an antidote to centrist politics.

– Read more of our coverage of centrism in British politics.