Labour nails it. The Tories are desperate to hide the truth about Universal Credit. - Canary 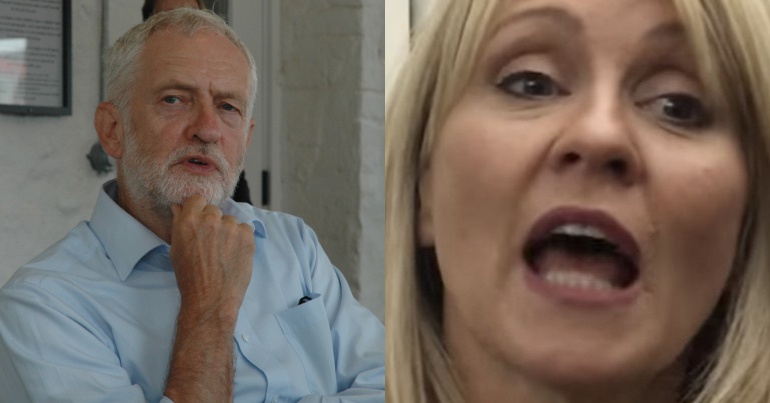 On 17 October, Jeremy Corbyn motioned a parliamentary debate on Universal Credit. But Conservatives shot it down with 299 votes against 279.

Serious questions remain about why the government voted against releasing its own assessment of this devastating policy.

“What are the Tories afraid of?”

Work and pensions secretary Esther McVey recently admitted that millions of households could be up to £200 a month worse off under the benefit. Leaked documents revealed it’s in such chaos that there are further delays to full rollout. But those already forced onto the controversial benefit are suffering. And the government knows this.

So as Corbyn explained, this ‘humble address‘ aimed to force the Conservatives to “come clean about the impact of Universal Credit on vulnerable people and families”.

MPs vote 299-279 against a Labour bid to force the Government to publish its OWN assessment into the impact of Universal Credit. You really couldn't make this stuff up, what are the Tories afraid of? ?

She’s got a very good point. Because this vote simply aimed to force McVey and the DWP to share their own analysis of Universal Credit’s impact.

As The Canary has been reporting for some time, the policy’s impact has been devastating.

Ahead of the debate, however, Tory MPs were whipped to vote against the motion:

Extraordinary. @theresa_may and @EstherMcVey1 are whipping Tory MPs to vote against transparency, preventing @DWP analysis of the losers from universal credit from being made public so that we can find out whether ‘there will be no losers’ or in fact, ‘some people will lose out’ pic.twitter.com/tgIEMPoBV2

The Tories have voted to shamefully cover up the impact that Universal Credit is having on families and people who most need our support.

And many people supported this view:

mps vote against releasing the impact assessments on the nightmare that is universal credit .that tells me that the tories have something to hide from the electorate,that they knew of suicides of the most vulnerable but carried on regardless.-the country deserves far better .

The Tories won the #UniversalCredit vote a short while ago. The motion was put forward in an attempt to force the government in to releasing impact assessment papers – their *own* papers, which will now be buried somewhere. This is an abhorrent way to govern. #TheyMustBeStopped

The impact of Universal Credit is shocking. As one young man said in a video shared by Corbyn ahead of the debate:

I don’t know where to go from here. I’m lost.

The Government should be ashamed. pic.twitter.com/bdMkWydXhj

Families are suffering, single-parent families more than others. The impact of Universal Credit is worse for women and people from ethnic minority groups. A parliamentary report into Universal Credit collated information ahead of the vote. It was based on evidence gathered by charities and agencies working on the front-line with those affected. Universal Credit pushes people further into rent arrears and towards homelessness. Food bank use is soaring. And the list goes on…

McVey, the DWP and most Tories know this, and more. So what else are they hiding? Angela Rayner’s right. Sadly, and tragically, “you couldn’t make this up”. Because no one with a heart would want to.

– Read more from The Canary on Universal Credit.