The media keeps elevating fascists while ignoring minorities. This must stop now. - Canary 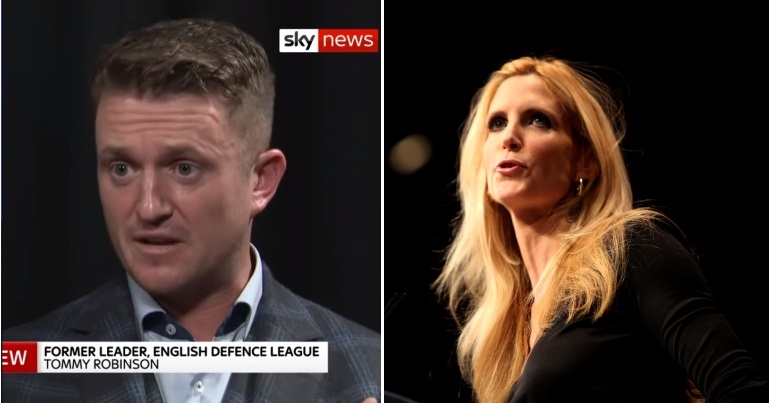 I hate writing about the far right. In fact, in the numerous times that I have written about racism and Islamophobia in the past, I have deliberately avoided making the far right my focus. The reasons for this are twofold. Firstly, liberal Western societies call racism a far-right problem while denying that it is, in fact, a systemic issue with roots in white supremacy and colonialism. Secondly, from academia to mainstream media, the far right already gets enough exposure.

So I really didn’t want to have to write this piece. But this past month, we had Tommy Robinson get primetime coverage on not one but two mainstream British TV channels. And yesterday, the Guardian decided to publish a puff piece on US immigration alarmist Ann Coulter. Earlier in May, the BBC interviewed Donald Trump’s former chief strategist Steve Bannon. Combine this with the active silencing of The Canary‘s Kerry-Anne Mendoza, a Black woman, by Guardian journalists this month, and I have truly begun to despair at the state of what we call ‘mainstream’ media in Britain.

Can we please have balance?

In this country, we like to think of the media as a symbol of free speech. As fair and unbiased. We are outraged at the brutal murder of a Saudi journalist. We regularly call other nations despotic and repressive for not allowing freedom of the press. We believe in balance – let’s hear all sides of the story. While the requirement for balance is not something I agree with, what really irks me is the double standard.

I don’t believe that all sides of an issue are valid, especially if one side is fuelled by hate. I don’t believe all viewpoints deserve primetime media coverage. But let’s say, for argument’s sake, that we should have ‘balance’. Well then, can we please have balance? After every Tommy Robinson interview, have a panel of Muslim men and women discuss their experiences? How the far right affects their lives in rural northern towns or bustling, diverse cities?

When interviewing Ann Coulter, can the Guardian make any reference at all to her role in the criminalisation of immigrants in the US? Children in detention centres being kept like animals in cages? Parents being deported? Detained children being ‘adopted‘ (read: ‘kidnapped’) by American foster families, rather than being reunited with their parents? Instead, we get to read about Coulter’s hair, her hand sanitiser, and her nicotine gum.

In Western societies, there seems to be this perpetual myth that the far right is being silenced. That not giving them a platform is equal to violating their right to free speech. Never mind that free speech is not an absolute right, and has always come with boundaries and restrictions. (For example, leading up to Remembrance Day, posting a picture of a burning poppy on Facebook could get me arrested.) But my issue is not so much with their abuse of free speech. Rather it’s with the fact that no one is actually silencing the far right – at all.

The BNP, UKIP, neo-Nazis, the EDL, Steve Bannon, Ann Coulter have all had exposure on mainstream British media. And, by and large, they have gone unchallenged. So the silencing of the far right is merely a claim they have manufactured to drum up sympathy for their cause. And when BBC Newsnight promotes its Tommy Robinson segment with a photo of Robinson’s mouth taped over, it is playing directly into this narrative.

In defence of the decision to feature Tommy Robinson’s views, the BBC issued a statement which said: “It’s not the job of BBC journalists to pretend that things aren’t happening when they can see that they are.”

Below is our statement on last night's @BBCNewsnight. It's not the job of BBC journalists to pretend that things aren't happening when they can see that they are. #Newsnight pic.twitter.com/Wwp18FXQ4x

To begin with, I don’t think anyone expects media outlets to pretend the far-right movement isn’t happening. What we do expect is for journalists to actually hold people like Robinson and Coulter accountable for the real-world impact of the ideologies they promote.

Again, I have no problem with the principle that journalists shouldn’t pretend something isn’t happening when it clearly is. Provided that we apply this principle equitably across the board, without double standards. However, where journalists insist on hearing out the far right, what we don’t see is journalists listening to marginalised groups in the same way. With the same intentness and the same reverence.

Where was the integrity of these journalists when Kerry-Anne Mendoza was blocked from speaking at the 2018 Claudia Jones Memorial Lecture? When have Sky or the BBC interviewed Diane Abbott about what drives her political ambitions? When will we see writers like Kehinde Andrews, Nikesh Shukla or Reni Eddo-Lodge getting primetime exposure, so we can learn about what makes them tick? Why do they do what they do? Meanwhile, columnists like Melanie Phillips and Daniel Finkelstein get nominated for the 2018 UK Comment Awards, and as Nafeez Ahmed points out:

Both Phillips and Finkelstein have openly affiliated with dangerous, fringe far-right hate groups which have brazenly used the spectre of a migrant, Muslim invasion of the ‘free world’ to advance an apocalyptic vision that is racist at its core, and rooted in far-right anti-Semitism.

As a visibly Muslim immigrant woman living in the UK with my Muslim family, I cannot put into words how it feels to see yet another far-right personality getting prime exposure in the British media. The views espoused by these people are not merely what the BBC describes as “unpalatable”. They are  dangerous. There is a clear link between far-right groups and hate crime against Muslims. Muslim women are particularly at risk. And Ann Coulter’s ideology has direct links to the appalling treatment of Latin-American illegal immigrants in the United States.

While defending free speech and journalistic integrity, what these white-run media outlets fail to understand is the real-world impact of the far right on minority groups. Let’s hear them out, even if their views may be unpalatable, they say. But when someone wants me gone, when they see me as less than human, these views are not just “unpalatable”. They are a threat to my very existence, and that of my family. So we can hear out all sides, but what I really want to know is this: when will our side be heard?

Featured image via The Canary/Wikimedia