People are angry at the Guardian's view on gender recognition. Here's how they're fighting back. - Canary Workers’ Co-op 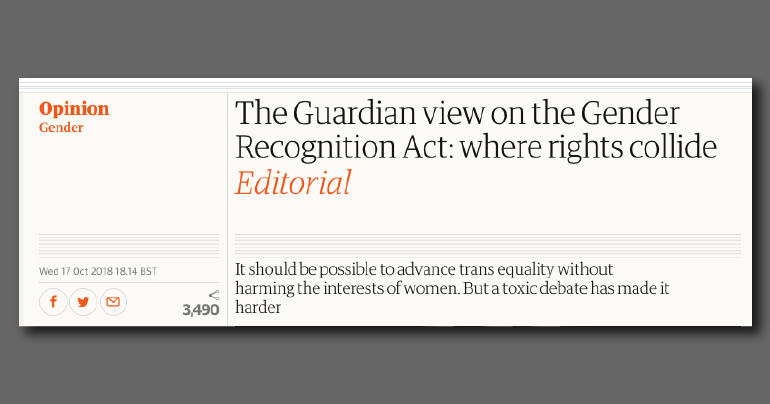 The Guardian‘s view on the Gender Recognition Act (GRA) has been described as “bewildering and misinformed”. Critics of the piece include women who’ve written for the paper. But there’s something we can all do to show solidarity with trans people. The government consultation on the GRA is running until this Friday, and we should all fill it out.

The piece represent’s the ‘Guardian‘s view’ on the topic. It discusses the consultation on changing the Gender Recognition Act 2004:

It talks about not taking a stance:

The debate has become toxic, with trans rights activists and some feminist campaigners taking opposing sides.

The Guardian rejects the idea that one of these positions is the right one – and the other wrong… Neither group is a homogeneous bloc and there are more than two points of view.

Several people think that the Guardian has taken a stance, however, by the way it presented the information. Among them are trans women who’ve written for the paper:

Bewildering and misinformed. The Gender Recognition Act will have no bearing on the Equality Act 2010 which ALREADY protects trans rights in single-sex spaces. https://t.co/7RHylso5PY

Didn’t even know whether to acknowledge this. It’s pretty harmful stuff. I can’t quite process how I feel about having written conscientiously for a paper that apparently views me through such an othering lens. But also this editorial doesn’t actually discuss the GRA? I…. https://t.co/Cs2o9JNFC8

People are criticising the piece for allegedly suggesting it will undo protections in the Equality Act 2010:

"The UK may be moving towards a situation where the default is single-gender spaces" – that's been the default for eight years under the Equality Act. Asking for the question of rolling back trans rights to be open for debate is deeply and shamefully transphobic.

The consultation on the Gender Recognition Act reads:

The consultation focuses on the Gender Recognition Act 2004. We are not proposing any amendments to the Equality Act 2010.

The first problem with the argument is that although it has repeatedly been presented as a response to the GRA consultation, in fact it has almost nothing to do with it. This is because the proposed changes to the GRA will have very little effect on whether and when trans people are able to access single-sex facilities and services. The current law, the Equality Act of 2010, already allows trans people to use the facilities and services that best align with their gender identity in almost all cases. This entitlement does not depend on having a GRC or on having received any particular medical treatment. The Equality Act does allow for trans people to be excluded from certain services in a limited range of cases where this can be shown to be ‘a proportionate means of achieving a legitimate aim’. Again, this provision applies to all trans people including those who hold a GRC.

What all of this means is that access to single-sex facilities and services is already governed by a principle of self-ID in almost all cases.

Another thing. Newspapers which are propagating fears about streamlining the Gender Recognition Act need get their facts right. They are almost always talking about things *which are already the law*. If they want to repeal the Equality Act 2010, they need to be open about it.

In line with the above argument, some have suggested the Guardian view doesn’t even cover the topic it’s supposed to be discussing:

Honest question, which part of this editorial has to do with the GRA?

While The Guardian says it ‘supports trans equality and believes reform of the law could form part of this’, it also perpetuates harmful stereotypes about transgender people.

Namely, in the article, the editorial team acknowledges dangerous myths about the concerns of ‘male-bodied people’ and not recognizing trans women as real women.

The Guardian piece does acknowledge that only ‘some feminists’ oppose the GRA. Despite that, it doesn’t do anything to highlight that some of its strongest supporters are feminists and cis women:

As a lifelong feminist, I assure anyone who is concerned that the GRA consultation doesn't harm women's rights. Stonewall is a reputable organisation run by a feminist and it backs the GRA. Check out the info in the link and please respond https://t.co/jUX0lctvBd

The consultation on the GRA ends on Friday 19 October. People are encouraging everyone who supports trans rights to fill it out now:

OH HI. Have you filled out the Gender Recognition Act survey yet? It closes this Friday, so best get your skates on ?

Not sure what to say? Here’s some advice: https://t.co/QA2XjNVQx1

Ready and raring to go? https://t.co/td9iizZSCh

There's only a few days left until the Gender Recognition Act reform closes. Read up on it here: https://t.co/M9H2gLnvPH

If you haven’t completed the survey yet, put aside five minutes between now and tomorrow to do so. You can access it here.

Getting involved is how people are fighting back against the “relentless media campaign against trans people”. So fill it in, and show solidarity against the onslaught.

UK followers please fill out this form. It's high time our government reforms it's policies towards trans and non-binary individuals. This is the time we cis individuals need to show up as allies. https://t.co/uBM3Bp9tVx

– Fill out the consultation here.

– Ask your friends to do the same.