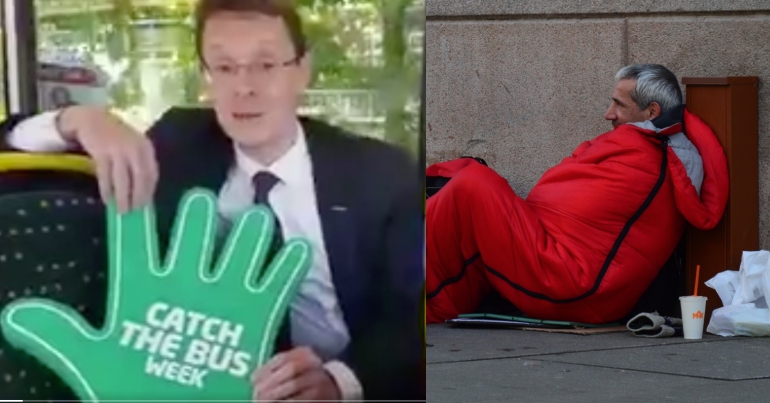 West Midlands mayor Andy Street has hit the headlines over his action on homelessness. But not in a good way. As the Mirror reported, Street spent £530.40 on a chauffeur to drive him and an aide to Birmingham and back. The purpose of the trip? A meeting on homelessness.

Doing things on the cheap

When Street was elected to office in 2017, he promised to:

keep the costs of the mayor’s office as low as possible.

But a Freedom of Information request revealed that Street took a one day trip to Finland to learn about its approach to homelessness, Housing First. According to the Mirror, the total for the round trip was £2,216.88. This included the chauffeur-driven trip in what is described as “first class luxury travel”.

Tory Mayor for the West Midlands Andy Street has sparked outrage by spending £500 of taxpayers’ money on a chauffeur to drive him to a meeting on homelessness. The obscene amount could have been spent on food or shelter for the homeless! #ShameOnYou #r4today pic.twitter.com/GP1iCdUcp2

The Conservative Mayor for the West Midlands, Andy Street, has just used £500 of taxpayers money on a chauffeur to drive him to meeting on HOMELESSNESS. Do you ever get the feeling they are taking the piss out of us?

Meanwhile, in July, Street was promoting catching the bus and extolling the “public transport revolution”:

This week is #catchthebusweek. Passenger numbers for buses in the West Midlands are on the up. This region is undergoing a public transport revolution which makes buses increasing easy and recent developments on buses make this even easier. pic.twitter.com/8gFeTBEsSR

Street did visit Finland for a good reason – to find out more about its pioneering Housing First project. And he claims that the trip helped him secure £9.6m of funding to fight homelessness:

The reason for the taxi from Birmingham to Heathrow to Helsinki and back – “The mayor visited a Housing First project in Helsinki on an 18-hour round trip which helped secure £10million from Government to help rough sleepers in the West Midlands."

As The Canary previously reported, Housing First is national policy in Finland. It has seen homelessness fall by 35% since 2010. This is compared to a 134% rise in the UK during the same time. The premise is that people with complex needs are given unconditional housing as well as 24/7 on-call support. Housing is seen as a right rather than something that must be earned.

A 2017 pilot of the policy by Crisis in Liverpool found the scheme was both five times more effective in assisting people off the streets and almost five times cheaper than traditional homeless pathway approaches. A government-funded study estimated that, through cutting down on inefficient use of public services, Housing First could save Liverpool £4.02m per year.

There are therefore positives about Street adopting this approach to homelessness in the West Midlands. Rough sleeping in the West Midlands rose in 2018 for the sixth year in a row. In 2016/17, 3,479 families were registered as statutory homeless in Birmingham. And this figure doesn’t include the full numbers for the people known as “hidden homeless”. Meanwhile, over the last four years, 700 people appeared in court in the West Midlands charged with vagrancy offences for the crime of being homeless.

There’s no doubt that radical action is needed.

But the cost of this trip was obscene. There is no justification for luxury travel on taxpayers’ expense. Street did not a need a chauffeur-driven car to take him to the airport and back. And his actions are an insult to homeless people, and everyone suffering from Conservative Party cuts across the country.

Featured image via screengrab/Twitter and pxhere