Police chief admits that arresting rough sleepers isn't the answer. But there is one simple solution. - The Canary 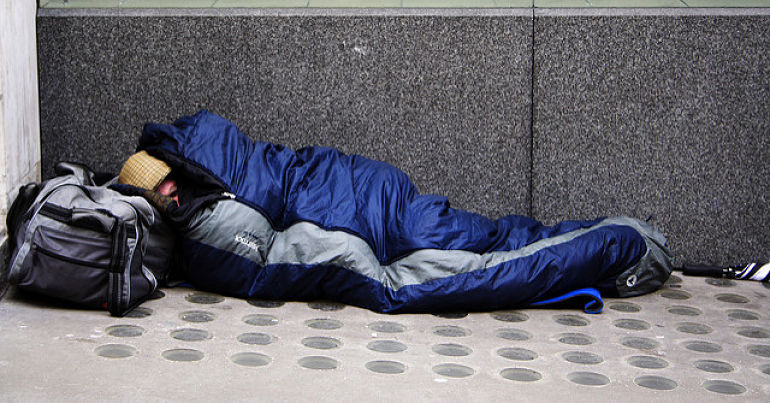 The number of rough sleepers in Hull has quadrupled in the last 7 years. According to the Hull Daily Mail, the city now has the second largest population of rough sleepers in the Yorkshire and Humber area, with more people living on the streets than at any time since records began.

But the police chief for the area appears bereft of ideas about how to tackle the problem. Instead of sticking to the tired old methods of the past, however, Hull should embrace a radical new policy called Housing First to counter its growing homeless problem.

The increasing presence of rough sleepers and drug abuse in the city centre has led to multiple complaints from residents.

In response to these complaints the chief constable of Humberside Police, Lee Freeman, tweeted:

The reports on @looknorthBBC this evening are not the images or the environment in Hull City centre that we want or will accept. @Humberbeat will continue to take action and we will be meeting next week again as planned to agree how we improve things quickly.

It already had attention & action & we have been working with Hull CC on the issues.
Homelessness is not solved by arresting people.
We have been taking offenders to court, taking out Criminal behaviour Orders and will continue to deal with ASB and drugs. But yes more to do.

In a statement to the Hull Daily Mail Freeman went into more detail about the police’s plans:

The serious point remains that the issues are complex social issues that require a joint partnership approach as the causes are not simple.

We have been arresting for begging, drugs, and ASB [anti social behaviour] and will continue to step this up. But if people [come] back the next day, dealing with causes is the key.

Freeman’s lack of ideas seems to be symptomatic of the city as a whole. A local journalist wrote:

I know Hull is no different to any other big city when it comes to this sort of scenario but, equally, I don’t think anyone has a solution to it.

Let’s dispel one myth right now. If your aim is to help rough sleepers find secure accommodation and tackle their various exclusions, then criminalising them is categorically not the way to go about it.

Britain has a sinister history of using law enforcement to tackle homelessness. But homeless people are actually 17 times more likely to be the victims of crime than the general public. Using crude public enforcement measures only serves to blame the individuals in question for their destitution.

This may satisfy some people’s yearning for taking tough action. But adding to someone’s exclusions does not help their integration into society in the long run.

Instead, Hull should look to a new radical policy to deal with its rough sleeping problem.

Housing First is a growing movement/policy which has seen huge success in assisting rough sleepers in getting off the streets. Finland, where Housing First is national policy, has seen homelessness fall by 35% since 2010. This is compared to a 134% rise in the UK during the same time.

The premise is that people with complex needs are given unconditional housing as well as 24/7 on-call support, re-conceptualising housing as a right rather than something that must be earned.

Your initial reaction may be that this sounds bloody expensive. Especially in the era of bone-crushing austerity, where nurses are forced to use food banks and teachers are finding themselves homeless.

However, a 2017 pilot of the policy by Crisis in Liverpool actually found that the approach was both five times more effective in assisting people off the streets and five times cheaper than traditional homeless pathway approaches. A government-funded study estimated that, through cutting down on inefficient use of public services, Housing First could save Liverpool £4.02m per year.

The growing concern in Hull about the city’s rough sleeping problem should bring real change. It should provide the impetus for local authorities to look at new, radical solutions.

The average house price in Hull is £111,208, compared with the UK average of £225,956. These relatively low house prices, coupled with a growing sense of outrage, should provide the perfect storm to embrace a Housing First approach.

Rather, than sticking to the antiquated, ineffective policies of the past, Hull has the opportunity to be a much needed beacon of light in the UK’s homeless crisis.

To be honest, it’s not really that complicated. Just give homeless people the homes they need.