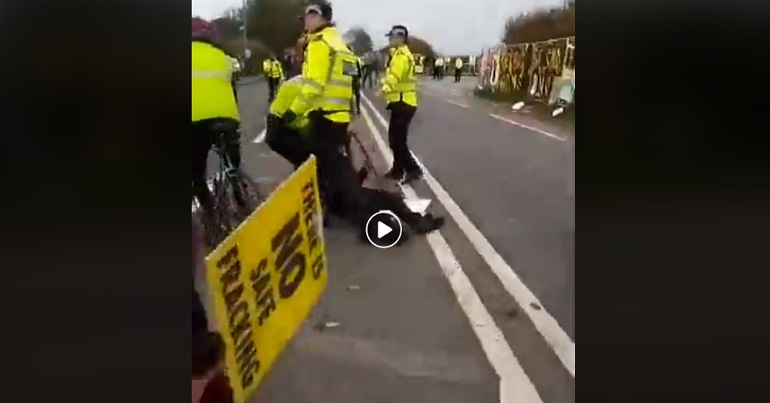 Police have been accused of a “serious assault” against a disabled woman at a fracking site. The problem is, this is not the first time something like this has happened.

Fracking: the eye of the storm

Preston New Road, near the village of Little Plumpton, is at the centre of a row over fracking. Cuadrilla has permission to explore and drill the site for shale gas, which has pitted it against local people. In July, the government officially gave Cuadrilla the go-ahead to start extracting shale gas. The decision was met by more protests from locals. But after a court case, bad weather and protests stopped it, Cuadrilla finally began work on Monday 15 October.

Tensions between police, private security, residents and campaigners have often run high. But now, video footage from a protest on Tuesday 16 October seems to show a police officer pushing a disabled woman to the ground:

People have been talking about the incident on social media:

BREAKING: @LancsPolice confiscate walking stick from disabled woman then forcefully & unnecessarily push her to the ground at #PNR #Fracking site.

Previously they had broken her shoulder.

Again it appears the police are targeting vulnerable people to discourage dissent.

Clarification, it was @sussex_police who broke her shoulder at a previous fracking site, but @LancsPolice were aware of this.

Yesterday, I was at PNR #fracking site. I am very concerned. Protecting the public & keeping the peace does NOT include slamming a disabled person onto the road. Police chiefs: get a grip or we will bring in private security to protect the people from the police! #RightToProtest pic.twitter.com/YdMUS0Hwaj

Don’t be so ridiculous. This is relating to a serious assault that took place yesterday.

The incident left some people unsurprised:

When did the cops declare war on the folks they swore to serve & protect ?

But a lot of people blamed the disabled person:

Maybe, if the idiot wasn't blocking the road and obstructing the area, it wouldn't have happened in the first place? Hadn't considered that one, had you.

No one blaming the disabled person asked why the police couldn’t have stopped the lorry; or why a police officer felt it was OK to charge at someone with a mobility aid.

The Canary asked Lancashire Police for comment. But it had not responded by the time of publication.

I was appalled yesterday to hear about this incident. I have also seen footage of police pulling disabled people out of wheelchairs. The local people… tell me this is normal behaviour from the police. They apparently behave like this towards disabled and elderly people to provoke a violent reaction from the peaceful protesters.

It is totally unacceptable. We are not going to stand for it. If this behaviour continues, we will bring in security to protect the people and take private prosecutions against the police.

Superintendent Richard Robertshaw is going to have to answer for this and sack some of these disgraceful bullies in his force. I can’t think of anything more sickening than picking on disabled people like this. It’s disgusting.

I will be working closely with Netpol, the police monitoring organisation, to assess how this situation develops.

The Canary spoke to Kevin Blowe from Netpol. He says many people may start to think aggressive police behaviour is actually “policy”:

Netpol has documented numerous incidents of assaults by police at Preston New Road, with aggressive tactics often apparently directed towards women or disabled people. Despite constant complaints from campaigners, police commanders have repeatedly failed to listen to their concerns, rein in their officers’ behaviour or consider the long-term legacy of this violent and confrontational policing for future relations with Lancashire Police.

It is little wonder, then, that many on the front line of opposition to fracking have come to believe their ill-treatment is official police policy, intended to frighten people away from demonstrating their anger.

As Blowe says, this is not the first time this has happened. Campaigners and local councillors have accused private security and police at the site of using “disproportionate force” and trying to “provoke violence” – something both groups deny. Two councillors also claim police have injured them in the past. But with Cuadrilla now properly starting its work, this seems unlikely to be the last time alleged police brutality raises its ugly head.

You can watch the full film of the protest here, via Thomas Burke.