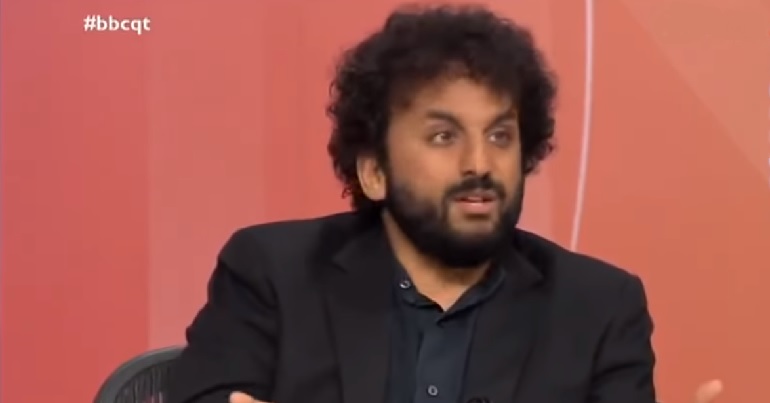 Allegations have emerged that Jamal Khashoggi was killed inside Saudi Arabia’s consulate in Turkey in October 2018. He was a Saudi journalist living in self-imposed exile.

Khashoggi was previously highly critical of Saudi Arabia’s war in Yemen. He also spoke out against repression in the country.

His death led to strong criticism of links between the governments of the UK and Saudi Arabia. And comedian Nish Kumar expertly exposed the hypocrisy behind these links on Question Time on 18 October.

“History will judge us so poorly”

The programme opened with a question on Khashoggi’s death. And after some evasive comments from Conservative MP James Cleverly, Kumar responded forcefully. He laid bare the scale of the UK’s hypocrisy:

our attitude to Saudi Arabia has been absolutely baffling…

history will judge us so poorly for the way that we responded to 9/11 – in terms of the wide cultural demonisation of completely innocent Muslims, and the way that the wars in Afghanistan and Iraq were executed. All the while, the country where fifteen of the attackers originally hailed from, we continue to deal with them as trading partners, and we continue to sell them weapons.

When asked what action the government should take, Kumar had equally strong words:

I think that we need to get a handle on what arms we’re selling them… first and foremost. I mean, we should have done that already. It shouldn’t have taken this journalist being murdered to do that.

The proxy war that’s being conducted in Yemen should have been lesson enough. And I cannot believe we’ve allowed the situation to escalate this far.

Links between Saudi Arabia and the UK run deep. The UK sold over £1bn of military goods to the country in 2017. Over £4bn worth of arms sales have been licensed since the start of the Saudi war on Yemen. Campaign Against Arms Trade alleges that there is “overwhelming evidence” UK weapons are being used in violations of international law. And Oxfam claims the conflict in Yemen has meant “8.4 million people are on the brink of famine”.

These cosy links were illustrated by a UK visit by the Saudi crown prince earlier this year. Figures across politics condemned that visit. Emily Thornberry accused the crown prince of:

funding jihadi groups in the Syrian civil war, ordering his guards to beat up the prime minister of Lebanon and in the eight months since he became crown prince doubling the number of executions.

People are holding the government to account over its links to Saudi Arabia. And Kumar’s contribution on Question Time exposes its hypocrisy expertly.

– In the UK, ask Theresa May and your MP to stop arms sales to Saudi Arabia. In the US, ask your representative and senator the same thing.