As the anti-Brexit march approaches, politicians from all parties are calling for a People's Vote - Canary 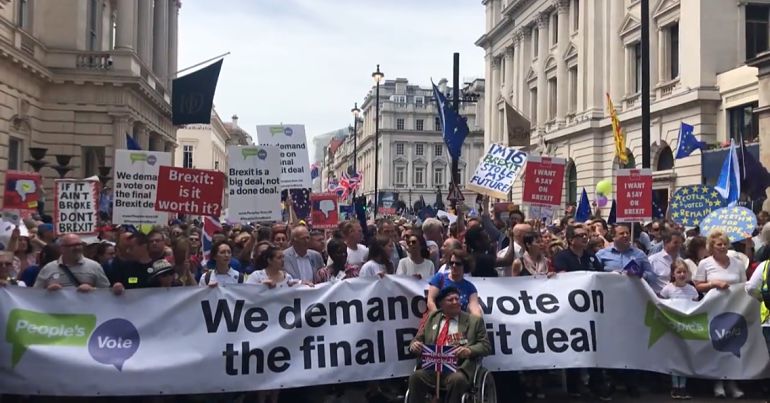 On 20 October, those campaigning for a People’s Vote on Brexit will take to the streets of London. The march will set off from Park Lane at 12pm. As reported by the Evening Standard, over 100,000 people are expected to take part. Some say it could be the biggest anti-Brexit protest to date.

The campaign group People’s Vote UK took to Twitter on 18 of October to “spread the word”:

We're telling everyone about the #PeoplesVoteMarch happening this Saturday.

Make sure you tell your friends, neighbours and family to March for the Future. RSVP here & please RT: https://t.co/z4hWRpcCPT pic.twitter.com/FgA56RWWcC

As did campaign group Our Future, Our Choice:

Tomorrow, young people from across the country march will march for a #PeoplesVote – this is your chance to make your voice heard.

The groups back a People’s Vote, alongside others including Open Britain, Britain for Europe, Scientists for EU, Healthier In, For Our Future’s Sake, Wales For Europe & InFacts.

The support for a vote on the final Brexit deal transcends the party political divide.

Support for a People’s Vote

Since the EU referendum in June 2016, both the Green Party and Liberal Democrats have shown support for a final say on Brexit.

Referendum wasn’t end of the story – it was start of something new.

We must be champions of greatest social transformation in years & use a #PeoplesVote as opportunity to transform things – not defend the status quo.

And the Liberal Democrats posted on Twitter to drum up support for the march:

We're marching! Join us on October 20th to march against this disastrous Brexit. Details here > https://t.co/NJHqR6atK2

Hands up if you think it's time for a #PeoplesVote ✋ https://t.co/fhsn0lOAjR

And Janet Daby, MP for Lewisham East, is also calling for people to join her at the march:

Join me at the @peoplesvote_uk march this Saturday to represent the voice of the many in our community. Looking forward to seeing friendly faces and demonstrating #Lewisham East's support for a final say on #Brexit, with an option to remain.?? pic.twitter.com/5qJr8aGwzw

SNP MP for Edinburgh South West Joanna Cherry will be speaking at the march. She also used Twitter to take a swipe at the Scottish Conservatives:

Some, including the @ScotTories think it’s ok to win a referendum by any means however mendacious then to demand the result be respected in perpetuity. I don’t. That’s why I’ll be marching & speaking at the #PeoplesVoteMarch on Saturday #Brexit #FBPE

And even Conservative MP Anna Soubry has tweeted in favour. She’ll also be attending the march:

From all over UK ppl of all ages, backgrounds and political views including former #Leave voters will march tomorrow for a #PeoplesVote deal or no deal w #Remain on the ballot paper You can take back control of #Brexit & end the chaos @peoplesvote_uk See you there! https://t.co/WytcyeOmEu

But perhaps her time would be better spent trying to convince Theresa May we need a People’s Vote. After all, they are ‘Honourable Friends’.

Comedian David Schneider shared the reason he will be at the march:

Here’s why I’m going on the march for a #PeoplesVote. pic.twitter.com/fqiPyRgi6q

Our Future, Our Choice Northern Ireland shared the story of a child “of the peace process”. An interesting perspective published by The Times:

https://t.co/fu3A3lS1GL
We are the children of the peace process and we deserve to have our voices heard #PeoplesVote

Support for the People’s Vote march spans the political spectrum. It spans the different countries of the United Kingdom. The argument for a vote on the final Brexit deal is compelling. And the prime minister must listen.

– Think Brexit is a disaster? Join the campaign for a People’s Vote

– Get down to the People’s Vote March if you can.