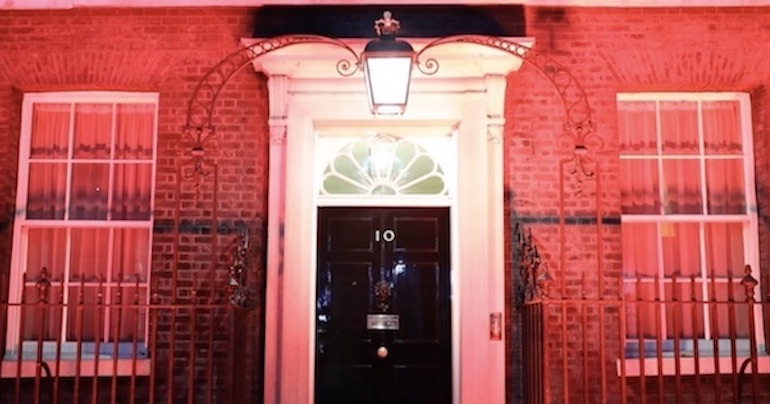 On 18 October, No 10 Downing Street lit up in red. This, it claimed, was to mark Anti-Slavery Day as a call “to end modern slavery”. No one can argue with the sentiment at all.

Downing Street is lit up in red to mark #AntiSlaveryDay and joins others around the UK calling to end modern slavery. pic.twitter.com/Oz1IE2IKaN

But the problem is, this is the Conservatives. So the gesture was a total insult. In so many different ways.

As The Canary reported, since 2017 the number of UK adults trafficked into sexual exploitation and slave labour has doubled. And, as if that weren’t bad enough, the Home Office has also cut the weekly allowance for people believed to have been trafficked into the UK. As the Independent stated, these cuts mean too many people are “drawn back into exploitation”.

So this ‘gesture’ really did miss the mark. Not least because many people had already pointed out the Home Office’s atrocious record:

Victims of trafficking and slavery in the UK, including children, are often imprisoned or deported when "rescued" by @ukhomeoffice – in many cases back to dangerous situations they have fled, or back into the hands of trafficking gangs so the cycle continues. #AntiSlaveryDay

On this #AntiSlaveryDay can I direct the @ukhomeoffice to the #LiftTheBan campaign. Refusing asylum seekers the right to work while they wait for their claims to be processed leaves them vulnerable to exploitation. Criminal gangs are watching the home office push people their way

And there’s an alarming rise of trafficked children in the UK:

Today is #AntiSlaveryDay. It is shocking that in 2018 not only are there thousands of children in #slavery in the UK, but that they are not adequately protected from it. Join us to end child slavery in Britain today: https://t.co/fZRkvjHLuZ #AntiSlaveryDay2018 pic.twitter.com/4AZn5xbKjU

Red lights are also not enough to hide the ‘hostile environment‘ championed by the Conservatives. This still creates torment and misery for too many. From refugees and migrants unable to claim visas or being deported while trying to apply for political asylum, to those affected by the Windrush tragedy, May’s government has an appalling track record.

As Andrea Stuart wrote in the Guardian:

surely it is clear that the violence of Britain’s colonial past hangs over the present. All of us need to confront this wilful forgetting around British history and tell the truth: Britain was built on the back of black slaves; they toiled and died over the centuries to enrich Britain.

And let’s not forget, Theresa May was also the architect of the hostile environment during her time as home secretary.

Many people took to social media to point out that these red lights were also a stark reminder of the misery caused by eight years of Tory-led austerity. 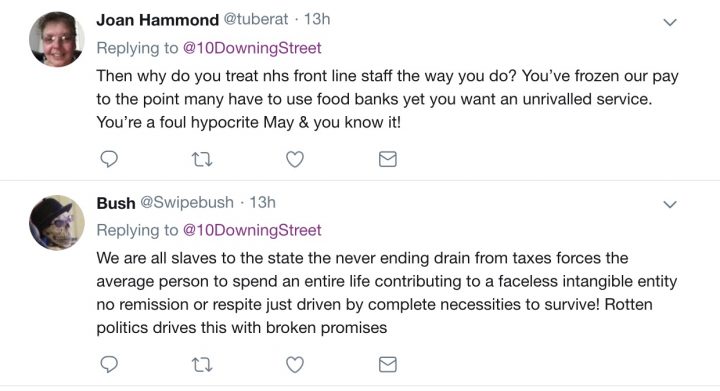 From zero-hours contracts to soaring levels of poverty and homelessness, many people see little hope in Tory Britain. So they shared their thoughts in response to the No 10 lights:

As The Canary has been reporting for some time, the impact of Department for Work and Pensions (DWP) policies is also devastating:

Some pointed out that the creation of new ministerial posts is one of the most searing indictments of this government:

For many people, the lights symbolised deaths caused by the government’s shocking record of arms sales.

UK-sold arms have been used in a brutal Saudi-led war against Yemen; which is, according to the UN, the “worst humanitarian crisis” in the world:

However, there was some light relief in the situation. Because some people wondered if the red floodlights were an early welcome for a new resident at No 10:

And one response summed it all up:

This really was little more than a stunt. And it really did show everything that’s wrong with this government. So, for the countless people still in modern slavery – both from trafficking or trying to survive under austerity – seeing Corbyn in No 10 can’t come soon enough.