Despite Piers Morgan and the Mail, a peace symbol is gathering more followers than ever - Canary 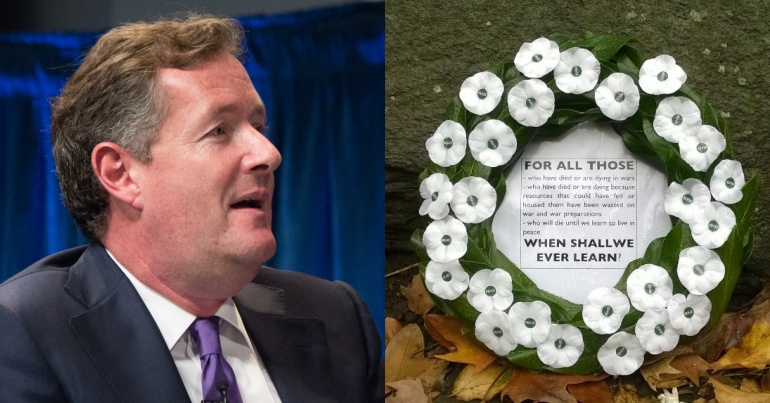 On 15 October, St John Ambulance gave permission for volunteers to wear white poppies for the first time in its history. White poppies, produced and distributed by the Peace Pledge Union (PPU), are a powerful symbol to remember all the victims who have died in wars and to honour them by committing to peace and challenging attempts to celebrate or glamourise war.

Following this announcement, PPU coordinator Symon Hill appeared on Good Morning Britain (GMB). During the segment, Piers Morgan showed his true ignorance, perhaps more than ever. So too did the Mail, which also reported on the ‘exchange’.

Yet despite the combined vitriol of Morgan and the Mail, evidence shared with The Canary shows that more white poppies may be worn this year than ever before.

Since 1933, the white poppy has been a powerful symbol of remembrance. It has become a poignant reminder that war kills without discrimination. And above all else, it’s a symbol that shows the only way to end war is to focus on peace.

Morgan really didn’t get that, though.

From the outset, Hill explained that he “strongly believe[s] in remembrance”. But this wasn’t enough for Morgan, who tried to insist that we should only honour the British dead. And he went on to ask a series of increasingly more aggressive questions, asking if World War 2 was ‘justified’ over and over again.

Eventually, Morgan tried to twist the argument by presenting the idea that people who wear white poppies are somehow terrorist sympathisers:

You say you want to remember all soldiers who lose their lives in conflict. Would that extend… to Isis [Daesh] soldiers?

As the segment went on, Morgan shouted over Hill and absolutely refused to listen to his argument. He tried to imply that, rather than a symbol of peace, wearing a white poppy somehow showed support for Nazis and other fascist or totalitarian regimes.

As Hill told The Canary:

It’s ironic to be accused of supporting Nazis on the grounds that we advocate remembering victims of war of all nationalities. Suggesting that someone’s life is of less value because of their nationality is surely the first step towards fascism. It saddens me that anyone should be so angry about the idea of remembering people who happen not to be British.

“The horrors of war”

Had Morgan listened, and given Hill a chance to speak, he would have given GMB viewers a chance to see quite how significant the white poppy is. Because as Hill explained to The Canary:

We must not allow remembrance to be misused to promote a narrow nationalistic agenda. To wear a white poppy is to reject such an agenda in favour of meaningful remembrance for all people affected by the horrors of war, along with a commitment to work for peace.

The disgusting consequences of irresponsible ‘journalism’

As a broadcaster, Morgan should realise his responsibility. Because following the segment, Hill and others at the PPU received a barrage of abuse. As he explained:

I’ve had a lot of messages on Facebook saying I should be killed (but none actually threatening to kill me!). Other messages say I should be tried for treason, locked up, hanged, or similar.

Because we want to remember all victims of war, we’re accused of supporting Isis or Nazis. Lots of C-words and other such terms. Some people threatening to attack people selling white poppies and so on.

Despite Morgan’s efforts, the number of people wearing white poppies is growing. And for good reason. Because sadly, we live in a world that is still rife with conflict. As Green Party co-leader Jonathan Bartley told the PPU:

I wear a white poppy because we need to remember all people who have suffered in wars, and are still suffering in wars. We can honour those who have died in war by working for peace.

And as Hill explained the day after the GMB show, “white poppy orders were running at twice the level they were at the same point last year”. Although there’s no way of knowing how many orders were from new people, it’s clear evidence that people didn’t buy into Morgan’s aggression. As Hill told The Canary:

The PPU hopes that this year will see even more people wearing this symbol of peace.

Wearing white poppies shows Morgan and the Mail how wrong they are. But it’s bittersweet. Because as the latest report from the Institute for Economics and Peace shows, “global conflict continues to rise”. And what Morgan completely failed to ‘get’ is that people wear white poppies because, above all else, they’re working to build a world where no one ever needs to die in conflict or war ever again.

– Find out about PPU’s work and order white poppies to share with your community.