There's a 'Mansize' problem with the mainstream media - Canary 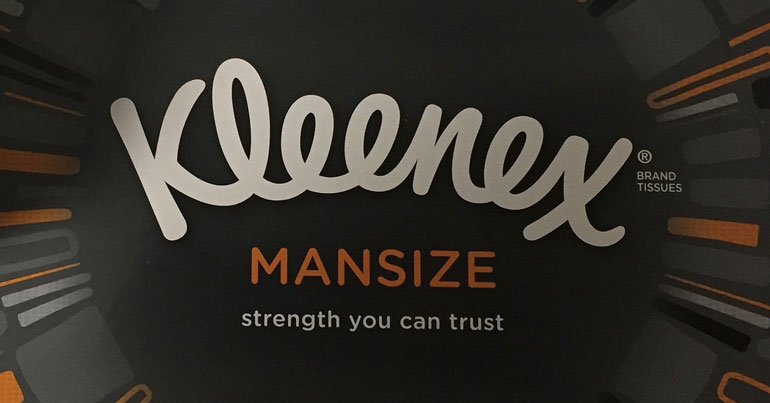 There’s big news this week. Kleenex announced it is rebranding ‘Mansize’ tissues as ‘Extra Large’, because some people find the name sexist.

The ‘Tissue Issue’ has been covered by pretty much every major media outlet. And apparently, the manly hackles are rising particularly fast because Kleenex has called its tissues ‘Mansize’ for 60 years. And when Waitrose has withdrawn its ‘Gentleman’s Smoked Chicken Caesar Roll’, you can understand why the media is up in arms. It’s ‘PC gone mad’.

Several of the reports feature this tweet from a mother of a four-year-old boy:

Hi @Kleenex_UK. My 4yo son asked me what was written here. Then he asked, why are they called mansize? Can girls, boys & mummies use them? I said: I don’t know & yes of course. He suggests you should call them “very large tissues”. It is 2018 pic.twitter.com/SeOg32RsDV

That’s a good point. This country has gone bloody mad. Maybe tampons should be seen as sexist against men ??

And of course, the usual abuse has begun on the woman’s Twitter feed:

…because the opposite of ‘man’ is ‘twat’. Apparently.

The Sun highlighted the frustration some are feeling by quoting this tweet:

Hi @Kleenex_UK I want to buy mansize tissues, however you have given in to the vocal and somewhat unhinged 1% who have an issue with that. Please reverse the pathetic and ridiculous decision to rename it before the entire world goes mad.

So that’s good then. The media has successfully highlighted another ‘hysterical’ woman and social media has been quick to put her in her place. Bravo!

It’s not an accident. When the mainstream media gives prominence to a story like this, it’s making a choice. It’s chucking a grenade. It knows the average reader will roll their eyes and go ‘Haven’t we got bigger stuff to think about?’

And those people are right. We have much bigger issues to think about. Issues like women being forced into sex work because of Universal Credit. Or how women risk abuse to get the benefits they need, get passed over for promotions they’ve clearly earned, get texts from their male bosses saying ‘I want to fuck you’. How 17 million women and girls risk rape every day just to fetch water. How women in Britain are assaulted, verbally abused, even urinated on while they grocery shop.

So yes, we do have bigger things to worry about. But post-tissues, when women speak out about the big stuff, will they come across as brave humans with a valid point? Or are they whiny tissue-grumblers who are probably a bit hormonal? Are we going to engage in constructive debate, or are we going to go with ‘FINE then, but you can’t have Mothercare!’ (Fine by me. ‘Parentcare’ would send positive messages about men being equal partners in childrearing.)

We’re also not focusing on the other side of the coin. We don’t see the women who are pioneers in their fields, making incredible contributions to science, technology, social justice, politics, journalism… pick a field, any field. Because women are half the world and half the world’s achievements. But you might miss that if you aren’t actively looking.

Why cry over tissues?

Kleenex tissues aren’t top of my personal agenda. But Hancox’s tweet resonated. I feel it every time I’m at the supermarket. In the clothes aisle, where my son can choose T-shirts that say ‘Total Legend’, ‘Superhero’ or ‘Genius’. And my daughter can choose ‘Mermaid’, ‘Unicorn’ or ‘Fairy Princess’. You can have whichever you like, darling – just don’t forget to sparkle!

It’s the same in the stationery aisle, the toy aisle, the toiletries aisle. By the time we’re explaining to our four-year-olds that ‘Mansize’ tissues are bigger and stronger, we’ve had enough. We’ve had it with a world that tells our daughters to be pink and pretty and our sons to ‘man up’.

So I can sympathise with the Kleenex protesters. I can certainly respect their views without name-calling.

On my Facebook feed, many women were verbally eye-rolling at what they saw as the pointlessness of this campaign. I saw a ‘don’t know they’re born’ in there, and more than one ‘Oh for fuck’s sake’.

My response was “Oh for fuck’s sake!” too. But my frustration is because THIS is what the mainstream media does time and again to women. Pick a story you know will cause almost everyone to lash out against those who raised the issue. It’s a fantastic divide-and-conquer tactic.

If it just passed with a shrug that would be one thing. But it doesn’t. Women face abuse daily for expressing their views. A woman who questions a tissue company is a ‘twat’ or a ‘snowflake’. A cohort of establishment journalists launches a sustained attack to stop The Canary‘s Kerry-Anne Mendoza give the Claudia Jones Memorial Lecture. Labour MP Diane Abbott spends her working life with threats and abuse ringing in her ears. As she says:

the problem is when people are not engaging in debate or scrutiny, but just showering you with abuse. That you are a n*gger… a prostitute, threats against your safety… which actually people wouldn’t say in a meeting or to your face.

Women, don’t turn on women about this. We’ve started this fight, but we haven’t finished it yet. See the machinery at work here. Because women divided are women weakened. And after so much work, we can’t afford to stop now.

– Don’t tolerate sexism in the media. Report it when you see it.