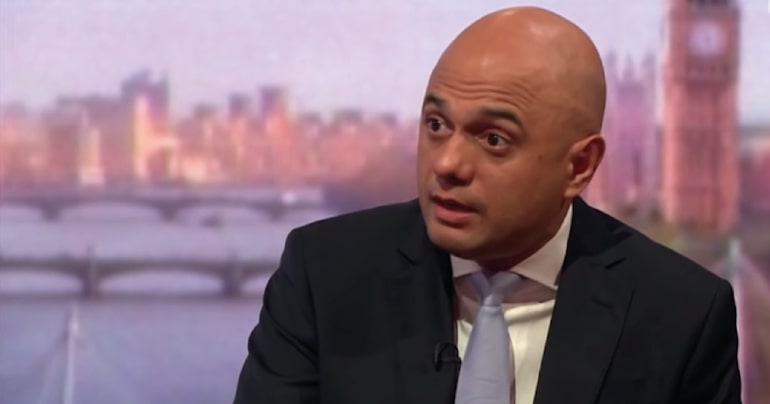 Home secretary Sajid Javid has sent a tweet that’s caused widespread anger. People – including Conservative politicians – have accused him of stirring tensions and “political posturing”. Disturbingly, they’ve also accused him of legitimising a far-right myth. Namely, the myth that there are “no-go areas” in British cities for non-Muslims:

These sick Asian paedophiles are finally facing justice. I want to commend the bravery of the victims. For too long, they were ignored. Not on my watch. There will be no no-go areas https://t.co/cZGqDOxt4u

The idea that there are ‘no-go zones’ for non-Muslims in European cities is a myth that’s spread by the right. It’s been debunked publicly and globally. On January 11 2015, a guest on Fox News claimed:

So in Britain there are not just ‘no-go zones’ there are actually cities like Birmingham that are totally Muslim, where non-Muslims just simply don’t go in.

Ofcom called this “materially misleading” with “potential to cause harm and offence to viewers”. It was also “concerned that the licensee [Fox News] had not acted sooner to correct the statements or to broadcast an apology”.

A lot wrong with this tweet. But how have we ended up with a home secretary of the United Kingdom who repeats Islamophobic myths off Fox News about “no-go areas” pic.twitter.com/mtTTRuRSMV

“No go areas”
“Asian paedophiles “
This should not be the language of a Home Sec ??‍♀️
The victims of these appalling crimes deserve better – they need to be protected , believed & supported.?
This issue is too serious for political posturing ?
You are better than this Sajid ?? https://t.co/IQ5kqLrzxR

The most relevant example of the myth being disproven, however, comes from the British Conservative Party. In 2015, then Republican presidential candidate Donald Trump said:

We have places in London and other places that are so radicalised that the police are afraid for their own lives. We have to be very smart and very vigilant.

A spokesperson for David Cameron said the former PM described the comments as:

divisive, unhelpful and quite simply wrong

As a city where more than 300 languages are spoken, London has a proud history of tolerance and diversity and to suggest there are areas where police officers cannot go because of radicalisation is simply ridiculous.

People have found more to criticise in the tweet. Particularly, people are disturbed by Javid distinguishing the criminals as “Asian paedophiles”:

Religious hate crimes up 40% in the last year alone. Shame on you @sajidjavid. Words have consequences and your pandering to the far right increases the risk of violence against British Asians. https://t.co/G8gtdhcg9f https://t.co/9Ti5Kqvib7

1. This is inciting racial hatred.
2. This is our Home Secretary.
3. Rejecting sexual exploitation does not give you a free pass to be racist.

Ok, because I'm seeing this tweet immediately, I just want to defend Sajid Javid for a second. It's not problematic at all. We always hear news stories like "30 white people convicted of crime", right? We always hear that, right? Right?! Wait… Ahhhhh….

This tweet is irresponsible, dangerous and divisive. It is unbelievable that it is a genuine tweet from a serving home secretary, who was previously communities secretary…

Defining these criminals by their ethnicity is also playing right into the hands of the far right. Unless it is now Home Office policy that any time an incident is reported on, the perpetrator’s ethnicity will be mentioned, the home secretary should admit he was wrong, retract this tweet and apologise.

People have also pointed out Javid’s tweet detracts from the broader issue of sexual abuse:

This gang was Asian, many paedophiles are white. The common denominator is that they are almost all men. There is a serious conversation to be had and it should be led by the Home Secretary @sajidjavid https://t.co/IrB8NFUubK

The Southern Poverty Law centre has summed up the myth of the ‘no-go zone’:

The bottom line – as Fox News was forced to admit in four separate apologies – is that while all pluralistic societies include areas that are more or less comfortable for certain individuals depending on cultural expectations, and all cities have high-crime areas (though these two are not necessarily overlapping), there are not now, nor have there been in living memory, actual Muslim-controlled “no-go zones” anywhere in Europe or the U.S.

That the 2018 home secretary is casually repeating this widely debunked myth theory shows how far the Tories have slid since 2015.