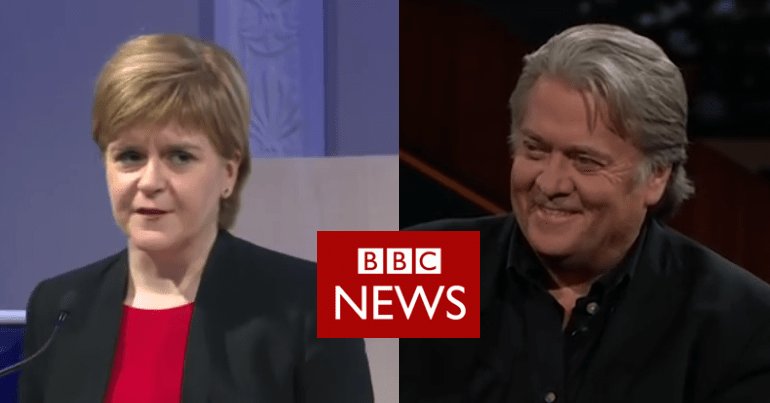 Scottish first minister Nicola Sturgeon has revealed part of an email where the BBC seems to praise white supremacist Steve Bannon. Sturgeon received the email after she pulled out of a BBC co-hosted conference, saying it risked:

There may well be substance to such a claim. In July 2018 for example, former Donald Trump strategist Bannon told a meeting of the National Front in France that attendees should wear accusations of racism as a “badge of honour”.

In an attempt to convince Sturgeon to attend News Xchange2018, the BBC emailed her office. And Sturgeon has tweeted some of the contents:

The email the BBC sent to my office justifying Bannon’s inclusion described him as a ‘powerful and influential figure…promoting an anti-elite movement.’ This kind of language to describe views that many would describe as fascist does seem to me to run the risk of normalisation.

The BBC upheld Bannon as a “powerful and influential figure” and characterised him as “anti-elite”. But Bannon, former chairman of Breitbart News, stands accused of promoting and participating in racism. For example, Bannon’s ex-wife issued a sworn statement in 2007 accusing Bannon of antisemitic remarks. The statement, which Bannon denies, claims that the far-right figurehead had problems with sending their daughters to certain schools because of antisemitism:

The BBC is co-hosting the event in Edinburgh where there will be a special edition of Question Time. Today programme editor Sarah Sands is also reportedly lined up to interview Bannon.

The site has also said flying the confederate flag isn’t racist; suggested being Black is an ‘advantage’ and argued: “gay rights have made us dumber”.

With such views in mind, Sturgeon accused the BBC of running the risk of “normalising fascism” through inviting Bannon onto mainstream platforms.

On social media, others agreed:

Strong words from the First Minister of Scotland.

I've been on the receiving end of Bannon and his acolytes' slanderous hatred. The fact that @BBCScotland thinks it is okay to give Bannon a platform and describe him as an influential voice is pretty damn insulting. They should know better than to mainstream hatred. pic.twitter.com/wkXmNR9AJw

I agree. And Bannon’s anti-elite movement has been shunned by every large European radical right movement – so the BBC are not just normalising his politics but promoting a myth of his ongoing political influence which doesn’t tally up with the reality https://t.co/7lH7unkEze

Novara Media editor Ash Sarkar also pulled out because of the inclusion of Bannon:

This is the first I’ve heard of this. If @NewsXchange are committed to platforming Steve Bannon, then I withdraw from participating in either of my panels at this conference.

I won’t be complicit in the normalisation of fascism amongst the chattering classes. https://t.co/WYr6EU1KTj

We must surely view the BBC’s decision to platform, interview and characterise Bannon as “anti-elite” in the wider context. While harbouring the far right, our public service broadcaster routinely ignores minority voices such as Palestinian advocacy groups. Such an imbalance of reporting is especially dangerous.