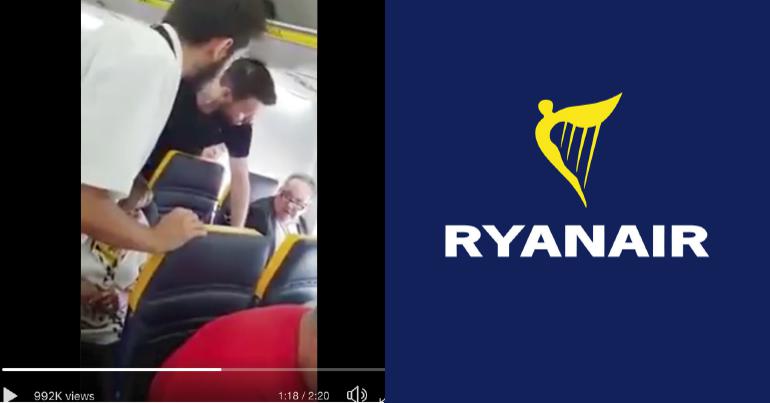 A video has emerged of horrific racist abuse on a Ryanair flight. Beyond the disgusting attack, people are also disturbed by the flight crew’s response. Because they didn’t remove the racist from the flight; they moved the woman he was abusing. And the company still hasn’t apologised.

This racist white man refused to sit next to an elderly black woman on a Ryanair flight.

The racist man in the video is angry because he doesn’t want to sit next to a black woman. Surrounded by passengers and flight crew, he says:

I don’t want to sit next to your [unclear] face. Your ugly fucking face.

In response to this, a member of staff asks the woman if she’d like to sit in another seat. She refuses, and the man shouts for her to be moved, saying “it’s only polite”. The man then proceeds to threaten her, saying:

He jabs his finger towards the woman as he says this. The man in the seat behind leans forwards to physically prevent this and tells him to stop. It’s unclear where any member of the flight crew is at this point, so it’s left to passengers to deal with the situation. The man behind asks the racist to stop. He replies:

I will carry on… with this ugly, black bastard.

The racist once more jabs his finger at the woman, and the man behind again leans over a seat to come between them. While aggressive, the racist does not appear to make physical contact with the woman at any point in the video.

More passengers criticise the racist, and the flight attendant returns to ask him to calm down. One passenger stresses:

Throw him off the flight. Get rid of him.

There is no attempt to remove the man, and the woman asks to move. Passengers express shock at the turn of events, and the flight attendant returns to speak with the abusive and threatening man, giving him a polite warning. The racist responds:

There’s been a strong backlash to the video:

Drunken passengers can be escorted from flights – but a racist verbally attacking a black pensioner and refusing to sit next to her is okay right? Just disgraceful on every level. Well done for this interview @Nadine_Writes https://t.co/wD80xDam35

This really is appalling @Ryanair . You will know the identity of the man and the level of training given to your staff! https://t.co/DyMleXQ0vD

There’s also been talk of a boycott:

Here is the racist bigot you ALLOWED to racially discriminate an elderly lady on your flight and let him have his way by moving the VICTIM rather than offloading him and passing him onto the police #SayNoToRacism boycott @Ryanair @RyanairFlights pic.twitter.com/4hZzv6Uj25

This is 2018, a more enlightened time. Suggest that we all boycott @Ryanair. Hit the odious Mr. O'Leary where it hurts – in his pocket. https://t.co/j0jZGKcQzl

The airline has since issued a statement:

Statement: We are aware of this video and have reported this matter to Essex Police

People pointed out that this wasn’t in any way an apology: 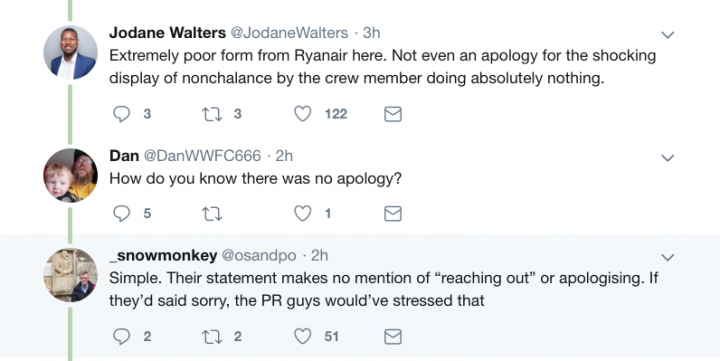 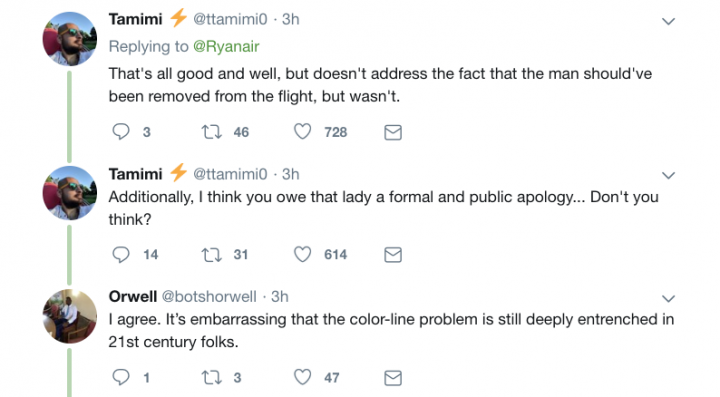 Nah, this is bollocks and paper thin. Passengers are routinely removed from planes for being too drunk etc, but racism and abuse is what? A grey area? https://t.co/KZOiOAHOsm

Ryanair has since claimed it can’t say anymore due to it being a police matter: 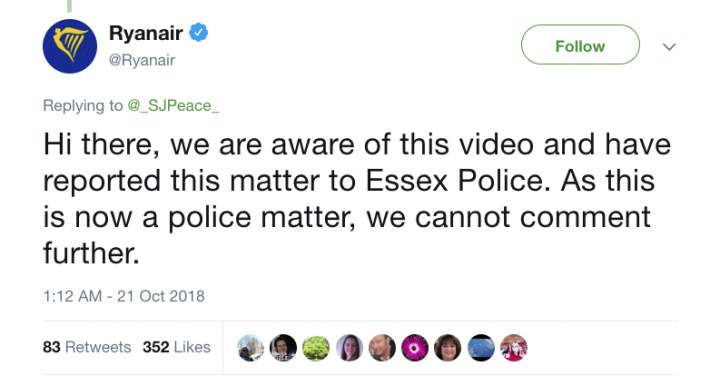 People took issue with this too: 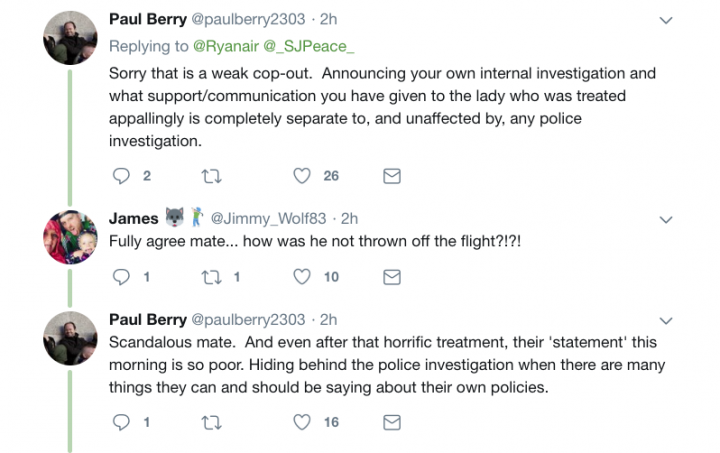 Ryanair has also issued a statement to the BBC. It still doesn’t include an apology or an explanation of why the man wasn’t removed:

We operate strict guidelines for disruptive passengers and we will not tolerate unruly behaviour like this.

We will be taking this matter further and disruptive or abusive behaviour like this will result in passengers being banned from travel.

In a further development, HuffPost has reported that the victim of the abuse was a member of the Windrush generation:

Daughter of elderly woman racially abused on Ryanair flight tells our reporter @Nadine_Writes that
her mother is one of the Windrush generation.https://t.co/uFHhcMPbRE

The woman’s daughter, who didn't want to be named, says she will never fly Ryanair again. She believes that if it had been a black person behaving in that way “police would have been called and we would have been kicked off of the flight.” pic.twitter.com/AXbGIW6ZqA

It’s sad that in 2018 racists feel able to publicly behave like this. It’s scandalous that Ryanair didn’t treat the incident as the criminal offence it obviously was. But sadly, it isn’t surprising.

Non-white Britons have endured a xenophobic Brexit campaign, the hostile environment, and racism at the very top of government. It’s no wonder things are going backwards. But as this incident shows, for every racist passenger or appeasing corporation, there are more people willing to stand up and fight for what’s right.