There was a massive demo on Saturday. No, not the London one. - Canary 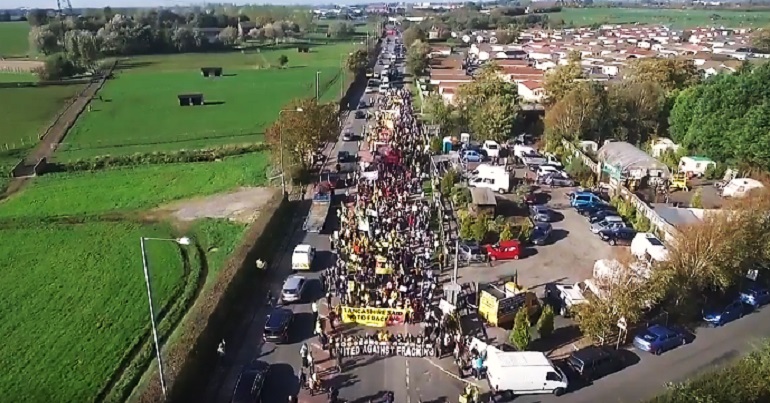 On Saturday 20 October, there was a bit of a protest in London. Something to do with Brexit, apparently. But meanwhile, in a small corner of Lancashire, a group of grassroots campaigners and locals had organised their own demo. And there wasn’t an EU flag in sight.

The campaign group Frack Free Lancashire held a “National Climate Crisis Rally” on Saturday 20 October. It was near the contentious fracking site Preston New Road in Lancashire. Groups and people from all over the country came out. They voiced their concerns over the climate crisis the planet faces. And they said a definite ‘no’ to fracking.

Campaign group Reclaim the Power had a message for the energy minister:

How's this for the end of #GreenGBWeek @claireperrymp ? A thousand people marching towards #PNR to reject fracking and for #climateJustice pic.twitter.com/Yq8MWvUzZi

Apparently, there were “absolute scenes”:

An incredible day of solidarity for communities fighting fracking & for #ClimateJustice globally as 1000 people line Preston New Road to say no to fracking!

Thank you to organisers @frackfreelancs and all the frontline communities who lead & inspire this movement. We WILL win. pic.twitter.com/3LPBwdSKMr

But it was Eddie Thornton’s drone view which, perhaps, best showed the scale of the demo:

ABSOLUTELY AMAZING turn-out at the #NationalClimateCrisisRally today at Preston New Road in Lancashire – Frack Free groups from all over the country have gathered together to tell the government NO TO #FRACKING! #BanFracking #ClimateCrisis (video from @EddieThorntonUK) pic.twitter.com/PkevRwFscp

Frack Free Lancashire told The Canary around 1,000 people turned up to the rally. Former senior civil servant John Ashton spoke to the crowd. As The Canary previously reported, he broke rank recently, accusing the government of wanting to ‘have its cake and eat it’ when it came to climate change and the fracking industry. But he didn’t mess around on Saturday either. DrillOrDrop reported he said of the government and fracking firms:

I bet they thought they’d won. We’ve got news for them. We’re not going anywhere today, tomorrow or as long as Cuadrilla are in that field.

You cannot fix the climate and frack for shale gas at the same [time] and you have to choose. The people of Lancashire have already chosen to fix the climate.

The location for the rally was very apt. Because Preston New Road, near the village of Little Plumpton, is at the centre of a row over fracking.

Cuadrilla has permission to drill the site for shale gas, which has pitted it against local people. In July, the government officially gave Cuadrilla the go-ahead to start extracting shale gas. The decision was met by more protests from locals. Then, a judge jailed three activists (who another judge promptly freed). But a court case, bad weather and protests stopped it and Cuadrilla finally began work on Monday 15 October. This was met with more protests. But matters got worse, as experts then recorded five minor earthquakes near the site.

It’s this chaotic saga which sums up the fracking industry. The government and corporations are trampling over democracy and local people in the name of profit. But once again, campaigners have shown they’re not to be messed with. And nor are they going anywhere any time soon.