Watch the most powerful speech of this year's conference season - Canary 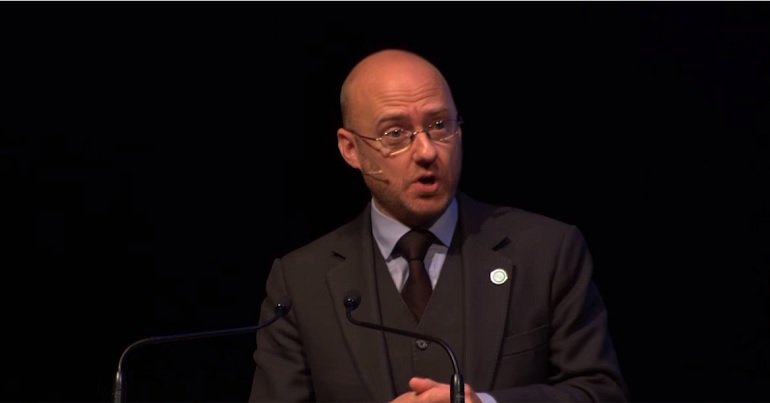 Glasgow has been playing host to the Scottish Green Party. Its party conference is being held in the city on the 20 and 21 October. And its co-convener Patrick Harvie stole the show of conference season with a powerful speech.

In defence of migration

Harvie’s speech was wide-ranging, covering issues from Brexit to climate change to welfare. But it was his vigorous defence of migration that really is a must see.

He started by slamming the way in which migration is debated in public life, to loud applause from the audience:

I am sick to death of hearing the issue of migration debated only in terms of the economic benefit to us. How much to do they pay in? How many benefits do they claim? Migration is a more human story than that. And human lives are about far more than their economic worth.

And he continued by making a powerful case for the value of migration:

The freedom to decide where to live, where to work, where to learn or where to make a life is something that enriches us all.

Next, he went further still. Taking on those who want to further restrict migration, Harvie had this to say:

But in the meantime, I refuse to live, I am not willing to live in a world in which the countries which cause those very problems around the world are the ones throwing up walls and fences and borders to control and demean the lives of others.

After delivering his damning critique of the debate on migration, Harvie made a firm commitment that the Greens will defend migration:

So the Greens will never use the language of the insipid centre ground of politics, portraying freedom of movement as only economic self-interest. We will stand for freedom of movement as a force for good in its own right, and in defence of migrants against a deliberately hostile environment designed to humiliate and traumatise them.

This strong stance against demonising migrants marries with the Scottish Green Party’s policy and its key figures. The party’s other co-convener, Maggie Chapman, described the UK’s migration policy as “racist”. In its 2016 election manifesto, the Scottish Greens stood on a platform of accepting more refugees into Scotland and closing Scotland’s only migrant detention centre. And in June, Green MSP Ross Greer successfully persuaded the Scottish government to give refugees the right to vote.

While the debate on migration becomes more toxic across the UK, interventions like Harvie’s in defence of migrants are important. They could help shift the public narrative and create an environment for more humane migration policies.