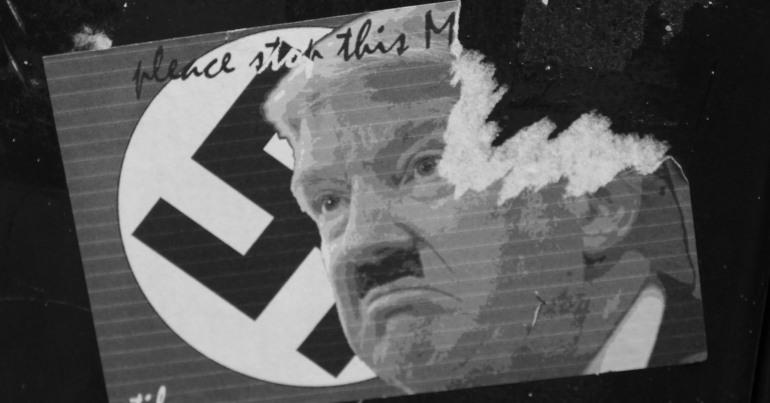 Donald Trump’s fascist tendencies have been obvious from the day he began his campaign for the White House. Of particular concern to commentators across the political spectrum has been his open and aggressive contempt for the press. And now, in a move reminiscent of 20th-century fascists, he has openly endorsed violence against a journalist.

On 18 October, Trump heaped praise on a congressman from Montana who assaulted a journalist last year. Speaking at a rally in state’s capital, Missoula, Trump described Greg Gianforte, who represents the state in the US Congress, as a “great guy” and “tough cookie”. He said:

Any guy that can do a body slam, he’s my kind of guy.

Gianforte attacked Guardian political correspondent Ben Jacobs in 2017 at a campaign event. The ‘provocation’ for the assault was nothing more than an innocent question about healthcare policy that Jacobs had put to the Republican candidate. Gianforte was charged with misdemeanor (non-criminal) assault and was subsequently given a non-custodial sentence of fines, community service and anger management therapy after pleading guilty.

“An attack on the first amendment”

Frighteningly, Trump’s comments evoked cheers from the crowd of around 8,000 people. Though he has attacked the press on numerous occasions before, this marks the first time that he has publicly indicated approval of a physical attack against a journalist.

Press representatives have already roundly rebuked Trump for his comments. Editor of the Guardian US John Mulholland said:

To celebrate an attack on a journalist who was simply doing his job is an attack on the first amendment by someone who has taken an oath to defend it.

The remarks have been denounced as particularly insensitive given that they come amidst a controversy surrounding the disappearance, and probable murder, of Saudi journalist Jamal Khashoggi. Trump has so far failed to unequivocally condemn the Saudi government, a long-time US ally.

Reactions on Twitter have, unsurprisingly, expressed outrage but also a lack of shock given Trump’s record.

Many brought up Khashoggi’s alleged murder:

This is shocking and chilling, especially in light of the disappearance of journalist Jamal Khashoggi: Trump has praised Congressman Greg Gianforte for his violent assault on a Guardian reporter: https://t.co/k6KcqTW11d

When a US based Saudi Journalist was just tortured dismembered, possibly while alive,

Donald Trump Praises an assault against Ben Jacobs by Rep. Greg Gianforte, R-Mont who body slammed Jacobs for asking a question about…

The #Saudi regime, which has just killed a journalist, will be pleased to hear: In #Montana, Trump on Rep. Greg Gianforte's assault of reporter Ben Jacobs: "Any guy that can do a body slam … he's my guy." pic.twitter.com/UdVefvh6uy

Others, meanwhile, suggested that this latest move crosses the threshold into outright fascism:

In despotic/fascistic regimes, writers are always amongst the 1st against the wall. Words are powerful weapons. #Khashoggi #amwriting#trump #keepwriting 'He's my guy': Trump praises Gianforte for assault on Guardian reporterhttps://t.co/6axC1rzVvZ

Trump’s approval of Gianforte’s body slam of a journalist proves that he is a practitioner of fascistic politics and soft on hate crimes. https://t.co/Lb9YW0gLS1

But it was Senator Bernie Sanders who made one of the best points:

By attacking the media and condoning violent behavior toward journalists, Trump is giving a green light to authoritarians all over the world to endanger the lives of those who work for a free press.

Sanders hit the nail on the head. The world is a dangerous workplace for journalists. As a 2017 UNESCO report said, we are seeing “growing attacks on journalists”. The report states: “Between 2012 and 2016, 530 journalists were killed, an average of two deaths per week.”

Given these facts, Trump’s comments could hardly have come at a worse time. Because when the so-called ‘leader of the free world’ is openly endorsing attacks on journalists, this will embolden despots around the world to turn a blind eye or even actively participate in this kind of behavior.

We live in ominous times. And the need to fight the Trump agenda and push for a progressive wave in the upcoming midterms is more pressing than ever.

– See other articles about Donald Trump at The Canary Global. Also visit our Facebook and Twitter pages for more of our international coverage.