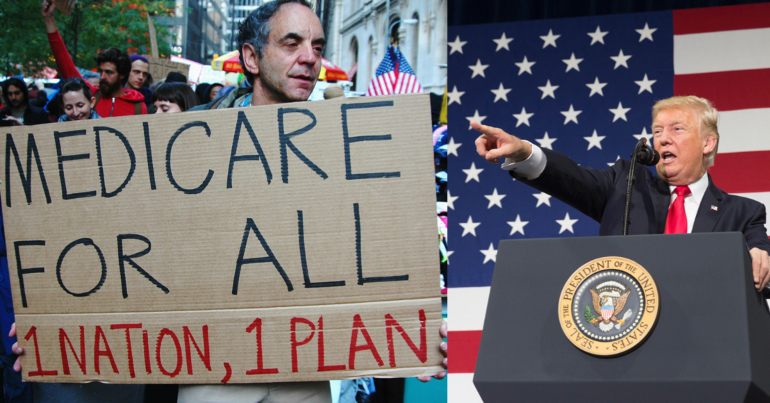 Donald Trump just released a ridiculous scaremongering video about Democrats’ plans to propose universal healthcare coverage in Congress. But there are many startling facts about the current US system that seem to have escaped him.

The worst thing ever?

On 16 October, the White House tweeted:

Medicare-for-all is a total lie… it will be the worst thing that’s ever happened to you and your family… You’ll have to double and even triple your taxes and that won’t be enough to pay for it.

Following Mexico’s belated introduction of universal healthcare in 2012, the US is now the only OECD country [pdf, p130] without it. The US left has long sought to change that, but previous attempts have been unsuccessful.

Several Democrats, along with independent senator Bernie Sanders, are now trying again. They are in the process of introducing a bill to Congress known as ‘Medicare-for-all’. This would essentially expand the Medicare system – which provides universal coverage to people over 65 – to everyone. Such a move has widespread support, with some polls showing support as high as 70% and even majority support amongst Republican voters.

It’s going to be a disaster for our country. It will turn our country into a Venezuela.

One obvious answer to this ridiculous statement, of course, is that every single Western European country has adopted some form of universal care system. And these continue to be stable, prosperous democracies. Public support there, meanwhile, is so high that proposing privatisation is widely considered to be “political suicide“.

It’s not hard to see why. Because several tens of thousands of people die in the US each year due to lack of access to treatment; around 45,000 per year, according to one study. A further several hundred thousand, meanwhile, go bankrupt every year due to inability to pay incurred healthcare costs. This scenario is, in fact, the leading cause of personal bankruptcy in the US. And perhaps most frighteningly of all, many people in this situation actually did have insurance, but got hit with hidden costs such as ‘co-pays’ and ‘deductibles’.

Ironically, the US system is actually more expensive than public systems. This is because, while neoliberals like to say otherwise, the private sector and ‘free’ market are not always the most efficient way of delivering services. The US, in fact, spends far more as a percentage of its GDP on healthcare than any other developed country. In spite of this, it tends to have worse public health outcomes than comparable high-income nations.

Though taxes might need to be raised slightly to cover the cost (and ideally on wealthier citizens rather than poorer ones), studies have shown that US households would likely pay less overall for healthcare within a public system. This is because it would eliminate the need to buy health insurance, free up money for employers that can instead go to wages, and get rid of the overhead of bureaucratic paperwork in the private insurance industry – and the obscenely high salaries of its CEOs.

The US also has the highest prescription drug costs in the world. This is in large part due to the fact that only governments have the leverage to negotiate with the giant pharmaceutical companies that produce most of the world’s medicine. And since the US government plays only a minor role in healthcare, it is therefore not able to bring down costs in the same way European governments are.

Even based on ‘free’ market capitalism’s own logic, public provision makes a lot of sense. As labor lawyer and author Thomas Geoghegan has pointed out, since employers in the US are responsible for non-wage labor costs, it actually makes it less attractive for businesses to locate there.

If that wasn’t enough, look at Trump’s own past statements

But there’s no need to take just a progressive Democrat’s word for it. Because Trump himself has suggested public healthcare provision is more sensible, on several occasions. During a 1999 interview on CNN, Trump said:

You have better health care than we do.

Both Trump and most members of Congress, however, have received significant campaign contributions from the private insurance industry – which profits from the status quo and stands to lose from reform.

The only ‘disaster’ is the status quo

Only by electing genuine progressives untainted by corporate funding can we hope for lasting reform. And with people like the openly democratic socialist Alexandria Ocasio-Cortez now becoming mainstream figures in the Democratic Party, that seems increasingly possible. The time is ripe for the US to join the rest of the developed world and consign the brutal, inhuman private insurance system to the history books. The world consensus is that government-funded universal care is the way to go. And the US public, and apparently even Trump himself in better moments, seem to agree.

– Volunteer for the Democratic Socialists of America‘s Medicare-for-All campaign (for readers in the US).

– Join one of the campaigns of Keep Our NHS Public (for readers based in the UK).

– Read more of The Canary‘s reporting on the United States. And see more Global articles on Facebook and Twitter.