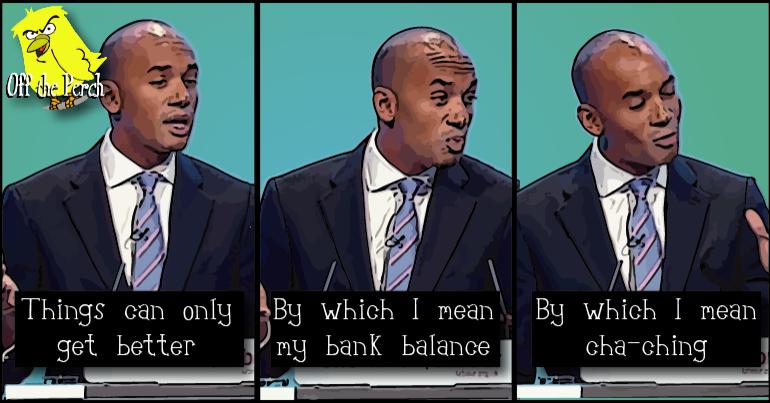 When Chuka Umunna said centrism was back, most people thought:

It’s since turned out that Umunna is being paid a shit-load of money to front this joke:

Incredible. Chuka Umunna to pocket £65,000 a year to chair this new "centrist" think tank, for doing 12 hours per month work. Time to ban our MPs – public servants who are there to serve their constituents – from doing lucrative second jobs. https://t.co/0cCt2Pkbyo

So it looks like centrist politics is back. If you define political centrism as a movement in which tepid politicians accept handfuls of cash to forward the interests of big business. Which you should, because that’s what it is.

Someone asked Umunna if he doesn’t so much believe in centrism as he believes in getting paid. He answered:

I’m confused. If I wasn’t earning lucrative second-job wages, how would that even be centrism?

When it was explained that other politicians promoted ideas because they believed in them, he said:

That’s what I’m doing. I’m promoting the idea that if someone pays me I’ll promote their ideas.

As Umunna spoke, Amazon owner Jeff Bezos walked over and stuffed a blank cheque into his waistband. The rest of his talk was just about how great internet monopolies are.

If you yourself would like the political backing of a minor backbencher who is somehow all over the news, send a cheque to:

The Opposition Benches (for now)