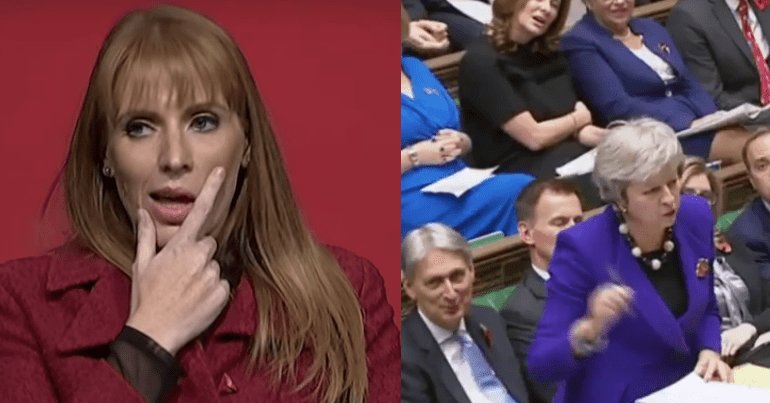 Tory MPs again reverting back to behaving like a shower of shouting rabble, booing, hissing, fake groaning, and bogus laughing, totally pathetic stuff, no wonder people are fed up with pantomime politics, Tories are masters at it #PMQs

The 31 October edition of PMQs was even worse than usual. When Jeremy Corbyn tried to ask a question, Conservative MPs almost always attempted to shout him down.

The noise in the following clip is a regular occurrence, but was particularly noticeable at this week’s parliamentary exchange:

"Are you done yet?" – Jeremy Corbyn is met by shouts from the Conservative benches as he attempts to ask Theresa May a question

Fighting through jeering from the Conservative benches, Corbyn said:

Mr Speaker, the benefit freeze takes £1.5bn from ten million low- and middle-income households. A low-income couple with children will be £200 worse off. For them, there is no end to austerity. Labour would’ve ended the benefit freeze.

May previously challenged Corbyn on the Conservatives’ planned tax cuts to predominantly the top 10% of earners. So the Labour leader pointed out his party would exempt 95% of the country from tax rises:

as she well knows, Labour policy is to raise taxes for the top 5% and for the biggest corporations in the country. That would be a fair way of dealing with financial issues facing this country.

Corbyn also questioned May on her pledge to end austerity:

can the prime minister confirm… there is still another £5bn of cuts to social security to come in this parliament, if it lasts till 2022, hitting the incomes of those with the least. Will she confirm that: yes or no?

But the Conservative leader did not give a straight answer. Instead, she tried to make her government’s cash injection into Universal Credit look good by comparing it to how bad things were before:

of course what he fails to mention from the budget is that, as a result of the changes we’ve made on Universal Credit, 2.4 million people will benefit by £630 a year

And for many, the increase isn’t sufficient to undo the fresh cut Universal Credit represents. Millions of families endured losses of £200 per month under the Universal Credit welfare rollout.

Many on social media agreed with Rayner’s assessment of the PMQs “pantomime”:

Tories cheering “more” at #PMQs makes them look completely out of touch. The secret is out, the only “more” we are getting from this Government is MORE AUSTERITY

The panto season arrived early this year in #PMQs. Not sure why Tory MPs cheering "growth UP!" when it's so anaemic.

Goodness that was a depressing #PMQs to watch. Panto-style shouts from the backbenchers, endless shouting down, no questions properly answered, nothing really learned, very little gained. Some people love this stuff, but for me it's the Commons at its worst.

Jeremy Corbyn asked Theresa May a direct yes/no question about whether there are still £5billion worth of cuts coming. She refused to answer. He should be allowed to keep asking the same question until he gets an answer. Otherwise #PMQs will continue to be a farce. #PoliticsLive

Week in week out, May fails to answer straightforward questions from Corbyn. Instead, Conservative backbenchers attempt to shout the Labour leader down, as Rayner quite rightly points out.

It suggests the Conservatives have no arguments and no answers to the fundamental issues facing Britain.