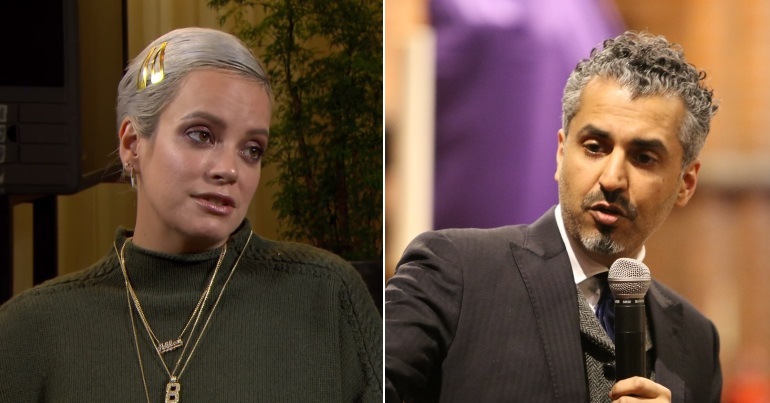 Musician Lily Allen has been fending off trolls after she got into a debate about ‘Asian grooming gangs’ on Twitter. It started when Allen described a report by anti-extremism thinktank Quilliam as “utterly useless”, based on critique she had read elsewhere:

Actually that @quilliaminstitute study has just been outed as being utterly useless. They got their nationwide averages from a total of 5 victims or something. https://t.co/jVj3SislZV

The founder of the organisation, Maajid Nawaz, didn’t take too kindly to Allen’s criticism:

Mate, have you read the report? You’re an uninformed outsider using your pop star privilege to reinforce chauvinistic attitudes among conservative members of our community, of which you know little, while betraying vulnerable underage child victims. Ask us, before *telling* us.

Haven’t deleted anything, in fact, @maajidnawaz deleted his tweet. I blocked him because he was insulting me and being aggressive. ‘Handling debate’ does not equate to being able to withstand barrage of abuse and personal insults. https://t.co/STqtjhQgDB

Muslim Twitter has, by and large, sided with Allen. Not least because both Quilliam and Nawaz have lost credibility within the Muslim community:

Dear @lilyallen. In case it's of interest, I investigated Maajid Nawaz's personal story some years ago and demolished most of them in this investigative report, 'The Self-Invention of Maajid Nawaz' https://t.co/Zk6SdAAdWB

Also Maajid you haven’t been a remote part of this “community” for quite some time, sunshine. Because that would involve listening and understanding and working together, not denigrating from some sort of imaginary high horse

While Nawaz accused Allen of abusing her “privilege”, he’s had little to say in response to critique of the report in question:

It’s not my research, I’m not a scientist, but I have read the report,and I don’t see how you could have taken reporting (as in, to the police) bias and conviction bias into your research, I would think both are vital when providing this kind of study. https://t.co/Ka9vffan8W

I’ve not attacked you or anyone else at Quilliam,there is really no need for you to take this tone Quite a lot of people have a problem with your study, perhaps a measured response TO THE MANY (QUALIFIED) PEOPLE CHALLENGING IT might be more effective than one sided slanging match https://t.co/Hdp9SHnuUN

Parameters of what constitute “grooming gangs” notoriously unclear & serious definitional, methodological & data limitations in all reports on this topic to date.Many acknowledge these (Quilliam doesn’t, making it particularly dangerous, as well as especially flawed in approach)

I'm glad to see that more people are questioning the shoddy research.

What I want to know is what possessed a "Counter-Extremism" Org with ZERO expertise in Child Sexual Abuse to produce such a report?

And why did @thesundaytimes publish its findings without any peer review?

Ultimately, Allen went on to clarify her motives for sharing concerns about the report:

I honestly didn’t set out to rattle anyone, just reposted a couple of articles that refuted the research, which is cited over and over again by Tommy Robinson and his lot. That figure crops up all the time On here and if it’s inacurate, they should correct it. It’s dangerous https://t.co/j4fcpasAMo

Also, and quite importantly, Allen reminded us that systemic abuse of women and children is not limited to any particular culture:

The systemic raping of women and children by men is not a trend by any group religious or otherwise . It has been happening and been being ignored since the beginning of time. https://t.co/wbnbbnNOUF

Twitter beef certainly has its entertainment value, especially when a celebrity is involved. But this time, it was positive to see that Allen used her platform to spread an anti-racist message.

You may not be my saviour, Lily Allen, but I’d invite you for chai over Maajid Nawaz any day of the week.