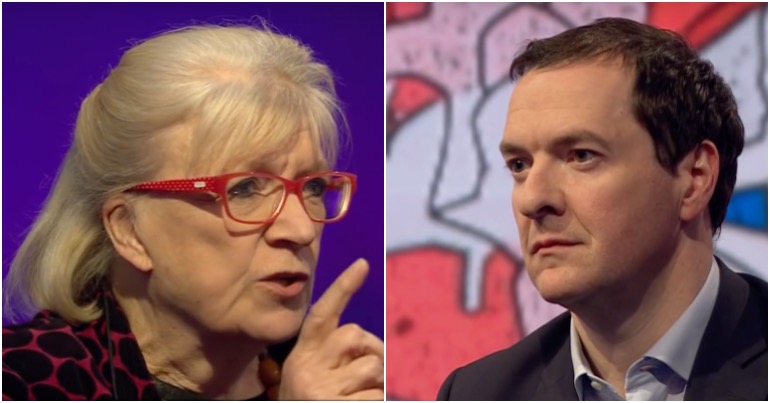 Former Tory chancellor and current editor of the Evening Standard George Osborne was finally given his comeuppance with an on-air drubbing. The unlikely hero who inflicted this humiliation was none other than Guardian columnist Polly Toynbee. As The Canary has previously explored, Toynbee has been derided by many on the left after scathing attacks on Jeremy Corbyn. But here she was in fine form and deserves credit.

Presenting his final episode of BBC Newsnight, Evan Davis fired Toynbee up. Firstly, he introduced Novara Media’s Ash Sarkar as a “proper lefty”. The unintended implication being that Toynbee, sitting next to her, wasn’t.

But the real provocation came when Davis said:

George… if I had to pick who you’re closest [to]… I would guess you are actually now closer to Polly Toynbee’s politics than you are to two-thirds of Conservative Party members.

Toynbee having none of it

Toynbee started by rebuking Davis for his comparison:

It’s utterly unthinkable that you should say such a thing.

She later scoffed at the idea Osborne was a ‘centrist’. And when she took aim at Osborne, it was glorious:

This man has done such harm and damage to this country. He has been the most right-wing chancellor we have ever had.

She was particularly scathing of Osborne’s attempts to demonise the poor:

look at how he tipped his cuts; the billions that he’s taken from the poorest… and then abused them with that endless talk about people with their ‘blinds down’, trying to make people hate anyone on benefits. Despite the fact that the great majority of them… are in work often working two jobs. If they had the blinds down it’s probably because they’ve been working all night. Your treatment of the poorest people in this country has been despicable.

She then contemptuously mocked Osborne’s claims that the Tories were “progressive”:

I mean you can talk about gay marriage; you’d have never done gay marriage if Labour hadn’t already done civil partnerships. I mean, if that’s all you can find that you did that was progressive.

Ignoring his own support for Labour’s pre-crash spending and ignoring the bank bailouts, Osborne’s response was his favourite economic fallacy:

We were left a desperate political and economic situation by the Labour government that she supported and cleaned up the mess, but obviously not to your satisfaction

As economist Ann Pettifor pointed out:

I do like it that your newspaper now runs a campaign for poor London children: ‘please donate money to the Evening Standard’s campaign for poor children’. Which is of a hypocrisy beyond anything you would think even he was capable of.

Osborne lamely responded that Toynbee’s onslaught was “the sort of extreme language you [Evan Davis] were just citing”. By doing so, he demonstrated that Tory accusations of ‘extremism’ from the left can be more accurately translated as ‘being robustly held to account for our appalling records’.

People understandably rejoiced that Gideon finally got what was coming to him:

Few people are more responsible for the catastrophic situation this country is in than @George_Osborne. He was just shredded on national television by @pollytoynbee for hammering the poor, for demonising them, for the misery he unleashed, and good lord, it was glorious. https://t.co/fGRYk2tikk

My thoughts are with George Osborne’s career at this difficult time. #newsnight pic.twitter.com/ehjnMKLmDe

The quality of the few people defending Osborne spoke volumes:

Delusional. Real proof of @George_Osborne record was people like me who’d never voted before, joining the Tory party and winning elections in places like Plymouth Moor View for the party for the first time. Voters are not stupid; some commentators most certainly are. https://t.co/7leGkqu4Zs

Credit where credit’s due

Whatever your opinion of Toynbee, this was a fine performance, as many acknowledged:

Dear @pollytoynbee
We've not always seen eye to eye – far from it – but your contribution to @BBCNewsnight was priceless.
Thank you for saying what millions of ppl wud luv to have had the chance to say to George Osborne.
Your best media appearance I've ever seen.
Sincerely thanks pic.twitter.com/35ncdlHwiE

Whether you love her or hate her, you’ll still enjoy watching Polly Toynbee hand George Osborne’s backside to him on a plate on #Newsnight last night. pic.twitter.com/m8IjffwzGN

Just like Tony Blair, we should never allow Osborne to rehabilitate his reputation through media. Wherever he goes, he must be reminded of the pain and suffering he inflicted on the weakest people in this country. So well played, Toynbee, for doing just that.

– Take action and support the work of the Child Poverty Action Group.

– Read our other articles on austerity.