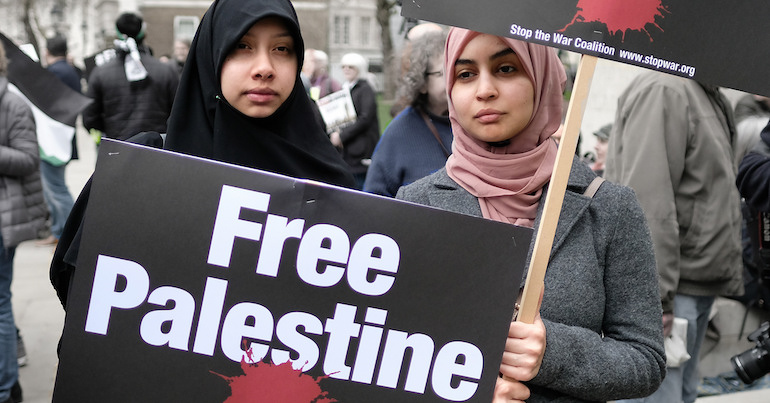 On 30 October, municipal elections took place around Israel. But ahead of the elections, a “blatant Islamophobic advert” caused outrage. It also drew attention to the ongoing apartheid and segregation in Israel.

It features Israeli supermodel Bar Rafaeli “wearing the niqab (face veil) and hijab (head covering)”. Rafaeli is, reportedly, also part-owner of Hoodies (the company that made the ad).

“Iran is here?” flashes across the screen in Hebrew before Rafaeli tears off the niqab and hijab to reveal Western clothing. She dances to the lyrics “It’s all about freedom, finally breaking the chains, costing my freedom”.

The racist advertisements have been used in an attempt to drive voters to support right-wing Israeli parties.

A coincidence that there are local Israeli elections happening just as this blatant Islamophobic advert has been published? My latest piece for @MiddleEastEye https://t.co/ehqcxqBNmC

Many people on social media also thought the ad was “ignorant and racist”:

This has to be the most ignorant and racist ad I’ve ever seen and I can’t believe a whole company approved this.. I’m disgusted and at a loss of words. pic.twitter.com/oiY1XB27EH

Not least because it lacked a fundamental social, religious and cultural understanding of why Muslim women choose to wear the hijab and niqab:

It’s important to remember that around “93% of Palestinians are Muslim”.

There have been widespread social media reports about openly Islamophobic tactics from Israel’s far right during these elections:

The Jewish home party in Ramla, a city which Jews and Muslims live together, launched a campaign for its city hall candidate: “This can be your daughter [if she marries a Muslim]”. Naftali Bennet, the party leader, is the minister of education (of Israel). pic.twitter.com/vz6U63zZK2

Others highlighted the lack of political rights that Palestinians have in territory which Israel occupies:

Illegal #Israeli settlers, living inside #Palestine on stolen Palestinian land, are voting in local elections for the Israeli state, of course Palestinian residents in the West Bank have no say in what Israelis do on stolen land.

And in some areas, such as the occupied Golan Heights, there have been widespread protests and a boycott of the elections.

The advert’s reference to Iran is a further insult to women there.

As The Canary previously reported, in February 29 Iranian women who removed hijabs were arrested. Many of these women face harsh prison sentences. As US-based journalist and activist Masih Alinejad told the Guardian in early 2018, an Iranian police announcement in 2014 reported that a total of nearly 3.6 million women had been “warned, arrested or sent to court” because of “having bad hijab” since the Iranian revolution in 1979.

Women in Iran also risked arrest to simply dance in public. In a brave act of peaceful defiance, they stood up to the so-called ‘morality police‘ and the harsh laws imposed on Iranian women.

So for an Israeli supermodel to emulate these acts of resistance is sickening. Because Rafaeli is simply promoting capitalism and bigotry; she won’t face prison and clearly doesn’t understand the complex political acts of civil disobedience that some Iranian women choose to undertake. This isn’t solidarity; it’s exploitation.

And that’s before even touching on the ongoing Western attempts to destabilise Iran. Iran’s regional enemies, Saudi Arabia and Israel, are US allies. Yet there’s a barely reported conflict occurring over oil pipelines in the Middle East; and Iran does not bend easily to America’s will. Given the complexity of this situation, for the ad to lead with “Iran is here?” seems like a thinly veiled attack. At best.

As Edah-Tally explains, this advert clearly implies “that the niqab and hijab are restrictive and oppressive”. Yet Muslim women are ultimately the only people who have absolute agency over the choice to wear the burqa, niqab or hijab. Or not.

We can’t be free as women unless we’re in a free country. And even if we’re free of the occupation, we can’t know freedom as long as we’re subjugated in our own society.

A blue-eyed Israeli woman benefiting from a system of apartheid has no idea what the ‘cost of freedom’ truly is. And for her to exploit these words to cynically bolster Israel’s far right amid its ongoing attacks on occupied Palestinians is utterly disgusting.

– Join The Canary, so we can keep holding the powerful to account. And see previous Canary articles on Palestine and Israel for more.