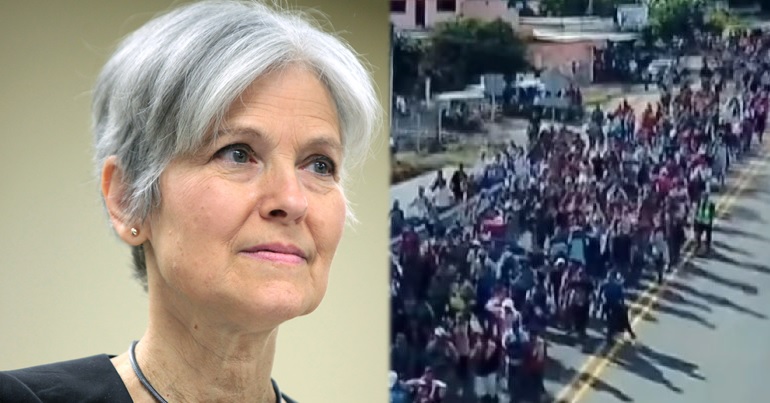 As The Canary has detailed, the thousands of refugees currently moving from Central America towards the US are fleeing extreme poverty and violence – conditions very much created by decades of US interference in the region. But now, former presidential candidate Jill Stein has nailed in just one tweet what the media continues to ignore about these refugees.

What media isn't telling you about refugees from Honduras:
1900s: US military turns Honduras into a banana plantation.
1980s: US makes Honduras base for "Contra wars" across Central America.
2009: US supports military coup in Honduras.
They must be allowed to apply for asylum. https://t.co/aCvIz3eqzn

As The Canary explained previously, US imperialism has a long history in Honduras (where local activists started the current refugee ‘caravan’ to avoid abuse during the dangerous journey northwards). And Washington’s support for a right-wing coup in 2009 was just the latest example of US disinterest in Honduran democracy and human rights. Because privatisation, repression, crime, and extreme poverty soon plagued the country; but the US propped up the coup regime, funding it generously. Emigration was a completely logical consequence, as Stein pointed out in a separate tweet:

US support for right-wing coups in Honduras led directly to migrants fleeing for their lives. The least we can do is offer them safe asylum. More importantly, we need to end US policies of military & economic domination that are creating mass refugee migrations around the world. https://t.co/uKbynXxV1J

But Honduras is not alone. US interference there fits neatly into a story of countless CIA operations in Latin America, support for coups and brutal right-wing dictatorships, and vicious destabilisation campaigns which violated international law.

Today, Latin American countries the US disagrees with (because of their efforts to increase equality and social justice) face sanctions, smears, and other attacks. Meanwhile, repressive political orders in countries friendly to the US (like Colombia and Mexico) receive support. In this environment, it’s no surprise that most of the world’s worst countries for workers’ rights are US allies.

In 2017 alone, US authorities apprehended around 165,000 refugees from Guatemala, El Salvador and Honduras; all countries with a long history of US interference.

A right-wing feeding frenzy, devoid of compassion or context

The right-wing media, however, are having a field day – cynically trying to boost Republican efforts in the upcoming US mid-term elections by stoking fear and hatred against the Central American refugees.

Donald Trump, meanwhile, continues to enable a conspiracy theory about Democratic donor George Soros (a Jewish immigrant born in Hungary) funding these refugees. This is the very kind of antisemitic conspiracy theory that just days ago led one far-right fanatic to murder 11 people at a Pittsburgh synagogue and may have caused one Trump supporter to send a mail-bomb to Soros just days before that.

There is no proof that Soros is funding these refugees. As former Trump aide and ally Anthony Scaramucci admitted recently:

You’re not having moms with their kids riding hundreds of miles to get to the U.S. border because George Soros is paying them. That’s a bunch of malarkey, and we all know that.

In short, Soros is the high-profile subject of numerous far-right conspiracy theories around the world. Yet Trump dangerously keeps playing to that crowd.

Even if the US wasn’t a country once proud of saying “Give me your tired, your poor, Your huddled masses yearning to breathe free”, it is a country responsible in large part for the poverty and violence from which Central American refugees are fleeing. And if its government had an ounce of integrity or self-respect, it would be welcoming these people with open arms.

– Read The Canary‘s previous articles about Honduras and Latin America at The Canary Global.