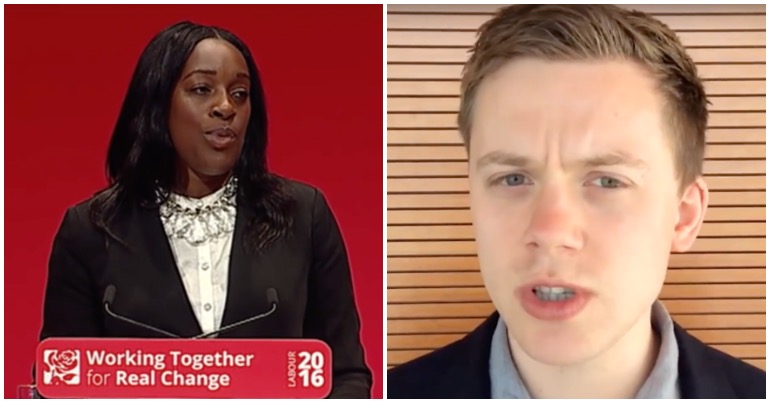 Controversy has exploded following news of drug charges against the son of shadow international development secretary Kate Osamor. Despite his conviction, Osamor’s son Ishmael is reportedly still her parliamentary assistant.

The case resulted in a predictable media feeding frenzy, with pious condemnations from moralising journalists and politicians alike. But journalist Owen Jones has come out fighting for Osamor, taking on the establishment’s drug hypocrisy in the process.

Seeing an opportunity to bash a Corbyn ally, some on the Labour right embraced the old adage: ‘never let a good scandal go to waste’.

Luke Akehurst, Labour right–winger and head of ‘Labour First’, suggested Osamor might have to resign over her son’s actions:

If he lied to the Haringey LCF panel interview when they asked "could anything in your record embarrass Labour" he needs to resign. If the LCF let him on the panel when they knew about this issue, they need to resign, as does his mum if she knew when she nominated him at branch. https://t.co/j0resttEIy

But Novara Media’s Michael Walker called out the absurdity of this:

Kate Osamor needs to resign because her son tried to sell a small batch of drugs at a music festival is a reach and a half from Luke here.. https://t.co/gQ6rUQeAhE

The same media pundits attacking Osamor also complained she’d blocked them on Twitter. And some went trawling through Osamor’s historic tweets to find humorous fodder about her son. But there were also suggestions of a more sinister driving force behind the media uproar:

In case anybody doubts that the media's campaign against Kate Osamor's son (and, by extension, Kate Osamor) is racially motivated, here's the Daily Mail linking the story to gang violence. pic.twitter.com/hw2FXleJeE

Jones goes to war… on the ‘war on drugs’

Instead of dancing around legal and party technicalities, Jones jumped straight to the heart of the issue:

oh who cares? The so-called 'war on drugs' is an embarrassing failure, stop criminalising people and ruining their lives because of failed, anachronistic, authoritarian drug laws. https://t.co/BcBRJY0UTu

Some may have seen Jones as an apologist for Osamor or Labour because of his reaction. But he has form as an opponent of the ‘war on drugs’:

For those who think I'm just tribally defending a Labour person here, I've consistently opposed the catastrophic war on drugs, and here I am praising David Cameron's earlier self, when he said sensible things about drugs. https://t.co/P0uThvekms

He also explored the issue brilliantly in this video:

Not quite grasping the extent of Jones’s rejection of the media moral panic, however, PoliticsHome editor Kevin Schofield tweeted:

He pleaded guilty to possessing £2,500-worth of ketamine, ecstasy, cocaine and cannabis with intent to supply. https://t.co/rW7cpP8Dd7

The response from Jones was emphatic:

couldn't give a flying toss Kevin!

The ‘you can buy, but you can’t supply’ fallacy

Jones really cut through the hypocrisy of the issue. He asked how many commentators pursuing this story had taken drugs themselves. And the implication was simple: that they had either bought drugs directly or indirectly from a drug dealer.

One of Jones’s Twitter critics didn’t fare too well on this issue: 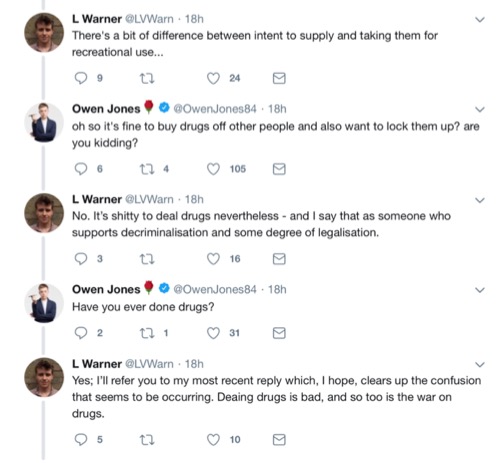 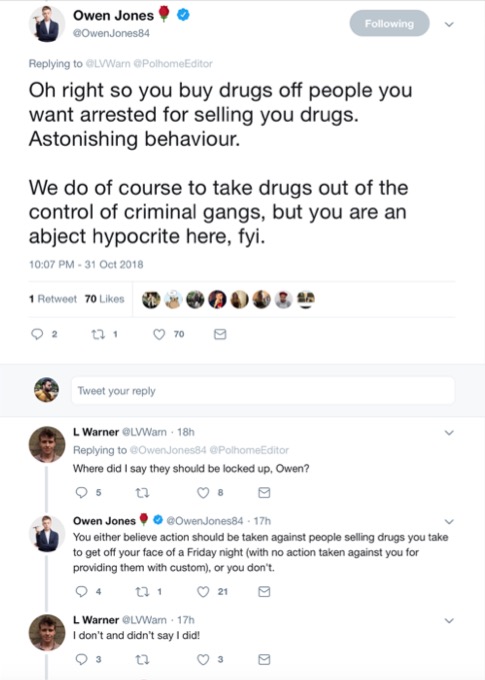 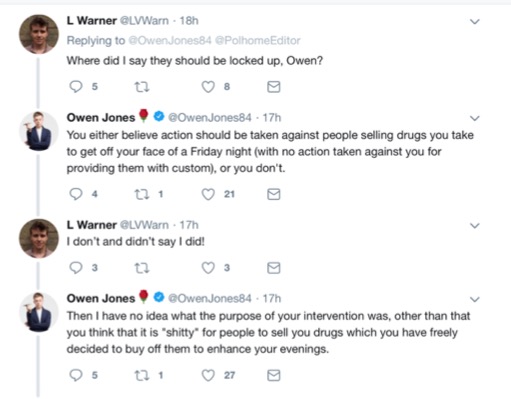 How many politicians do you think have broken the law, including specifically drugs laws?

And he went so far as to refer specifically to unnamed members of Tony Blair’s government:

Several members of Tony Blair's Cabinet took drugs, and it's poorer people, particularly poorer black people, who are the principal victims of the catastrophic failure that is the so-called "War on Drugs" https://t.co/0WMwK2HF3a

Labour needs to change policy, and Westminster should get its own house in order

Just for anyone who may have still thought Jones was blindly defending Labour, meanwhile, he insisted in another tweet that “Labour as a whole needs to shift its policy”.

And he’s right. Because until the Labour leadership shows the bravery to call time on the failed drug war, as others are calling for in the party, it will remain open to these kinds of attacks.

Some Tory MPs, meanwhile, have claimed Osamor’s son isn’t suitable to work in parliament. But let’s recall some of the behaviour that has already been reported to occur in parliament. For a start, accusations of bullying and harassment of parliamentary staff; cleaners complaining of drunk MPs leaving vomit and used condoms around their offices; allegations of historic drug use by prominent politicians; and allegations that the government’s drug minister personally benefits from the prohibition of drugs due to her husband’s legal cannabis farms.

As the books Drugs without the Hot Air and Chasing the Scream show, the drug war is an abject and destructive failure.

Osamor’s son’s behaviour may not be a good look for the Labour Party. But it must be viewed in context – much like a seller of alcohol under US prohibition would now be laughed at if considered a serious criminal today.

Jones was right to call this out, and more people should follow his lead.

– Read more of our work of drug reform.